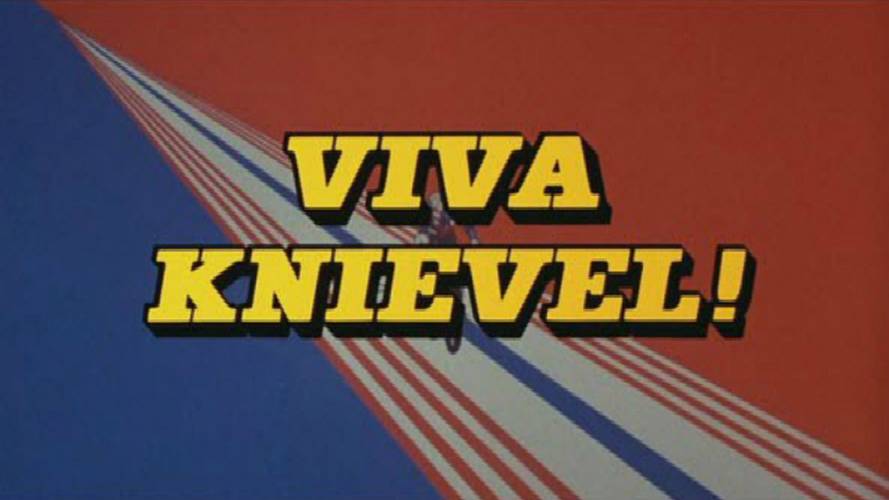 Viva Knievel! (1977) - Moto Movie ReviewYou could easily argue that "Viva Knievel!" is the 1970s distilled into one feature length film. All it...

You could easily argue that "Viva Knievel!" is the 1970s distilled into one feature length film. All it really lacks is a reference to stagflation and a Billy Carter cameo. It is hard to explain just how crazy the idea for this movie is to modern, younger people, but I will try. Imagine a major studio making an action movie staring a nearly washed up Eli Manning as himself, but also an action hero, plus Jim Carrey, Adam Sandler (in dramatic rolls), Dakota Johnson, and that gray haired guy from Mad Men.

The plot makes about as much sense as some of the videos shot by me and my teenage friends years ago,without a script, over the course of a weekend. The title comes from the fact that a good chunk of the action takes place in Mexico, where evil genius Leslie Nielsen has a plan that involves making an exact duplicate of Evel's custom semi trailer, packed to the gills with cocaine, then killing Evel in a motorcycle jump so customs officials won't look too closely at it when they drive back over the border in mourning.

Sure, there are millions to be made with the smuggling and sale of these drugs, but I have to ask: Wouldn't it be cheaper just to bribe the night shift at some border crossing? There appear to be dozens of guys on the payroll for this caper, plus an exact replica of a custom truck (inside and out), and duplicates of all the bikes to pay for.

This could not have been a cheap truck to build

Speaking of bikes, the bikes are real the stars of this movie. No matter what you think of Evel's abilities — or Harley-Davidson motorcycles — the XR750 based jump bikes sure are sweet looking. Plus, they added a huge degree of difficulty to every jump, with at most 6" of suspension travel. It's telling that even the movie stunt guys felt the need to build a lighter Triumph-based jump bike, and dress it up like an XR750 for many of the scenes.

This is one of those rare parallel twin Harley-Davidsons

The cast, as I mentioned, features two slightly washed up American treasures: Evel's manager(?) and promoter(?), the comedian (and Oscar winner) Red Buttons, as well as song and dance man (and Oscar Nominee) Gene Kelly as his alcoholic mechanic. A young Lauren Hutton is also there as the love interest, who is a serious photojournalist sent to cover Evel's last jump (she hopes) for some morbid tabloid or something. Dabney Coleman also walks through the movie— seemingly on his lunch break from a better movie.

The saving grace of this movie and why it's worth 90 minutes of your time (and $2.99) are the stunts. All of the stunts are real, with very little over cranking of the camera to speed things up, and only a small piece of recycled jump/crash footage. One of the best set pieces (and one that has fallen out of favor in the past 30 years) is where a rider times a truck passing through a tunnel perfectly, so as to land on the roof and stop safely. You also get jumps over trucks, cars, over a cage full of lions and tigers, and more, more, more. My favorite is the motorcycle jail break through the halls of the mental hospital.

That's the awesome "Strato Cycle," which I believe is the inspiration for the latest Ducati MotoGP bike's aerodynamic body work. The other jump bikes as mentioned are Harley XR750 flat tracker based, but with the awesomeness that is 1970s red/white/blue Evel custom paint jobs.

Attempting to sneak up on the bad guys on the loudest motorcycles in the county, wearing the loudest jumpsuits of the decade.

Rotten Tomato Rating:17% (but that is based on just 8 reviews)

RideApart Worth Watching: Yes, even worth spending the $2.99 on Google Play

Redeeming Quality: So many redeeming qualities. The bikes. The stunts. The ridiculous over the top 1970s-ness of it.

The unintentionally funny parts pretty much fill in all the parts where there isn't a bike doing something dangerous — to balance the whole thing out.

Things to watch for: As mentioned, try to keep track of every time the Harley changes into a Triumph mid stunt.

Also, in the universe of this film, helmets don't have chin straps, they just seem to stay because of all the 1970s extra sticky hairspray.

So many jumpsuits, which I think must be ripe for a comeback, right?

You can also have fun noting all the things that would never make it into a modern film, like the above actual dialog. Or the first scene, where a grown man wanders into a orphanage in the middle of the night, and visits the young boys while they are in bed... to deliver Evel Knievel toys of course. Also — in what surely was Evel going off script — he gives a crowd an anti-drug speech, which ends "...you kids, if you put nitro in your bodies in the form of narcotics, so that you can do better, or so that maybe you think that you can do better, you will for about five or ten years,… and then you’ll blow all to hell."

So remember kids, drugs will make you better, but just for 5-10 years, so be careful. This is an especially strange bit of dialog, seeing as how the movie may have been funded by the company that has the Evel Knievel toy concession. Toy versions of nearly all the vehicles in the movie exist, or at least were sold at the time.

You can watch this gem on Amazon, Google Play, iTunes, or YouTube, but you're going to have to pay for it. You can also get added comedy thanks to the RiffTrax, with Mike Nelson and the guys from MST3k, for an extra $9.99 for their podcast audio track.