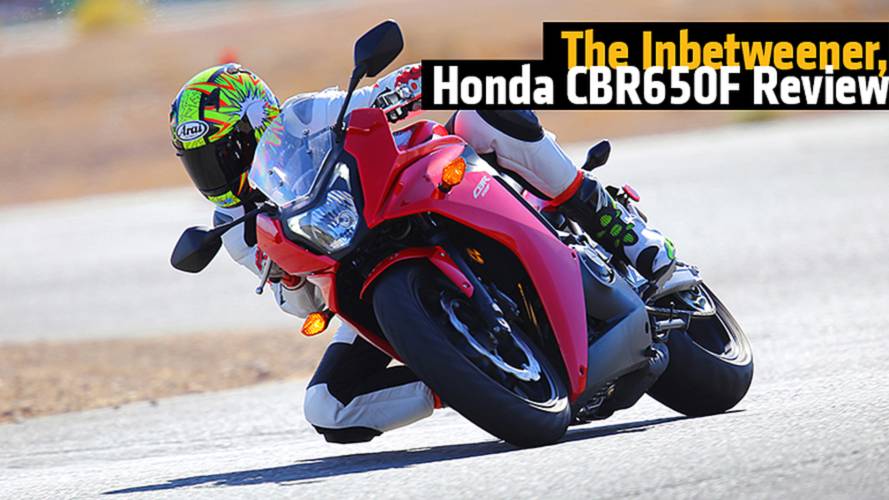 Not exactly the most common bike on the track, Bruce Speedman takes the Honda CBR650F review through its paces at Willow Springs and the streets of LA.

As Honda is comfortably settled in the superbike segment with the CBR1000RR, the supersport niche with the CBR600RR and recently establishing its presence in the lightweight category with the CBR300R, the dominant Japanese motorcycle manufacture has targeted the middleweight sport sector this year with the all-new 2014 CBR650F.

Engineered from the ground up, the 2014 CBR650F is a middleweight sportbike designed for those who want the compact dimensions and comfortable ergonomics of a sport touring bike but the increased power and nimble agility of a full-on supersport bike. This is also an excellent midpoint platform for those on the CBR300R-to-CBR600RR vector.

Unlike similar bikes in this middleweight segment such as the Yamaha FZ-07 and Kawasaki Ninja 650 with parallel twins, the 650F motor is built on an inline-four platform. This produces a very well-balanced engine that runs extremely smooth with hardly any vibration felt through the bars, pegs or seat.

The cylinder bore is the same as that of the CBR600RR power plant but the 650F engine has a lengthened stroke producing the extra 50cc’s of displacement. This longer-stroke motor and lower-compression combustion chamber (11.4:1) result in excellent low and midrange power without revving to the moon like most modern supersport bikes. Just over 85 HP and 45 ft. lbs. of torque are squeezed out of this motor all under the relatively-low 11,000 RPM redline.

The transmission is equipped with 6 gears at rather close ratios for first and second gear. The higher gears are a bit taller enabling speeds well into the triple digits. Shifting is positive and somewhat light but must be conducted deliberately as we encountered a few false-neutrals (during shifting and even when simply on throttle, off the shifter) while track testing.

Similar to the CBR300R, CB300R/F and CB500R/F, the dog-clutch gear shifting system does not seem to be as fine-tuned as those on the RR models where only light foot selection inputs are required to click into the next gear. The motor is linked to this transmission through an extremely light and smooth wet-plate clutch. Clutch engagement and modulation is effortless and precise.

The back-bone of the CBR650F consists of a steel, twin-spar frame and subframe unit. The rigidity of this design and strength of these construction materials produce a very solid foundation. Very little wallow or chassis flex was detected even when pushing the bike hard in the corners on the track. However, the use of steel to achieve this level of rigidity has also contributed towards the 460 lb curb weight.

Cost savings were definitely noticeable in the suspension department. The non-adjustable forks and minimally-adjustable rear shock (aside from a few preload clicks) narrow the performance range of these components. These parts did a great job soaking up all the bumps, dips and obstacles of the city streets as well as provided nimble steering for navigating traffic.

However, shortcomings surfaced during track testing when entering tight corners at an increased clip or making mid-corner adjustments in long, high-speed sweepers. The front end wanted to wander and the rear pogo-ed a bit (though, less than anticipated) even with the 155 lb pilot. Under hard acceleration out of corners, the OE Dunlop Sportmax 180 rear tire lost traction a few times but the step-out was very linear, controllable and did not upset the chassis nor suspension any further.

The forks were also overwhelmed by the surprisingly powerful braking system which was an aspect that stood out on the CBR650F. The dual 320 mm waved front discs paired with twin-piston Nissin calipers provided extremely strong braking performance that did not bite harshly nor fade noticeably. The force exerted seemed to flex the forks and unsettle the suspension a bit but the otherwise-balanced front end and solid chassis kept the bike from getting too out of shape under hard braking. This braking performance could be improved even further with the CBR650F ABS model for a $500 premium which proved to be intriguing after our experience with the stellar standard equipment.

Ergonomics are excellent on the CBR650F making the bike more attractive than our GSX-R600 long term bike for traffic commuting. The high-rise clip-ons, low rearsets with rubber peg tops and plush rider-passenger integrated seat (with an included tool-less cowling cover for the passenger portion) produced a very comfortable ride. Add the silky smooth engine with plenty of low end power, feather-light clutch and simple yet stylish instrument cluster and you have a sport-inspired ride built for the commute.

Despite the 460 lb wet weight, the very low center of gravity made this bike feel lighter at low speeds than supersports weighing in around 50 lbs less. Throwing the bike around in traffic, through the city streets and in the canyons was rather effortless regardless of the limits of the suspension discovered on the track.

The race track also magnified the drawbacks of this low center of gravity as both pegs, the kickstand and the muffler guard would drag when even a moderate amount of lean angle was applied. This was compensated by hanging off of the bike further but even with extreme body positions, corner speed was limited by hard parts digging into the track surface.

The technology on board the CBR650F is limited but still impressive for an $8,500 package. The all-digital instrument cluster displays all the information you need at quick glance including a fuel level indicator in true Honda fashion (a HIGHLY underrated feature in our opinion). The hand controls are also very utilitarian but one strange aspect we did notice was that the turn signal actuator is below the horn button which was the opposite of the orientation of most bikes. This resulted in fumbling turn signal activation and honking signal cancellation attempts when becoming accustomed to the CBR650R.

Honda’s 2014 CBR650F is a great bike perfectly positioned for riders moving from a CBR250R or Kawasaki Ninja 250/300. Whether commuting to and from work, navigating the busy city streets or carving up the canyons, the CBR650F can accomplish all of this very well.  Finding a sportbike with this kind of power and capability under the $10k mark is tough these days but the $8,499 MSRP price tag makes this bike one of the better bangs for your buck. Though more power can be found elsewhere and limitations were encountered when pushed hard at the race track, this is an excellent learning tool in preparation for the supersport class. However, riders may just become hooked on the ergonomics of the CBR650F as we did. Although we only spent a few weeks on the bike, we definitely missed its comfort and ride-ability when jumping back on the supersports.