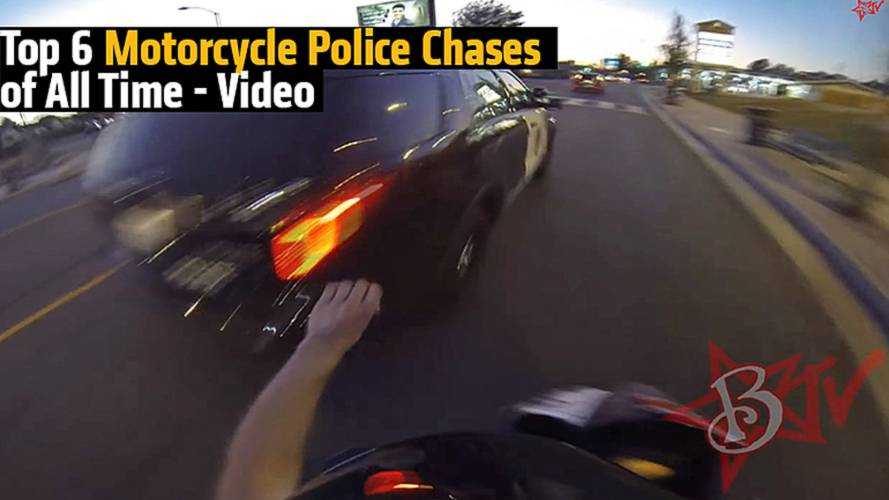 We don't recommend you act like the riders in these motorcycle police chases.

Most riders have been there before. The boys in blue caught you exceeding the speed limit and for a split second the thought enters your mind to twist the throttle and hit warp speed for a quick getaway. Fight or flight. The vast majority of riders obey Johnny Law and pull over for a guaranteed sermon about “racing your crotch rocket” and the obligatory ticket that comes with it.  Some, however, choose the adrenaline-induced warp-speed evasion route. Luckily for us, there is video proof of their failures and occasional victories.  See below for our favorite motorcycle police chases.

Most cop evaders go for the stealth getaway while being pursued, but this perturbed chap decides to throw haymakers at car mirrors while going the speed limit. Watch his luck and sanity run out when he decides to take his repsol off-road.

READ MORE: What To Do When The Police Pull You Over

"Hey guys! Video this." Slapping a sticker on a cop car might be a good idea at first, but make sure you actually have some riding skills before you try and run from said cop car.  The curb and pavement issue the justice for the cop in this video.

If you decide to take off when you see the blue and reds, you should probably make sure you have enough fuel to make it more than 3 blocks.  Otherwise you will get roughed up good like the Aussie in this video.

Say what you will, but I think the police overseas have a little more determination and risk in them compared to our boys stateside.  Kudos to the cop for seeing this one to the end and making some seriously dangerous risky moves to catch this ghost rider in training.

Any rider wearing camo pants and a rider club vest automatically has a target on their back in the eyes of the police.  A classic game of cat and mouse in this night time high speed run.

Stroll In the Park

It wouldn’t be fair unless we showed a video of rider actually evading the police successfully.  This dirt biker gets creative in his terrain choices and sends this cop on a wild goose chase.  Don’t miss the police commentary at the 8:50 mark.