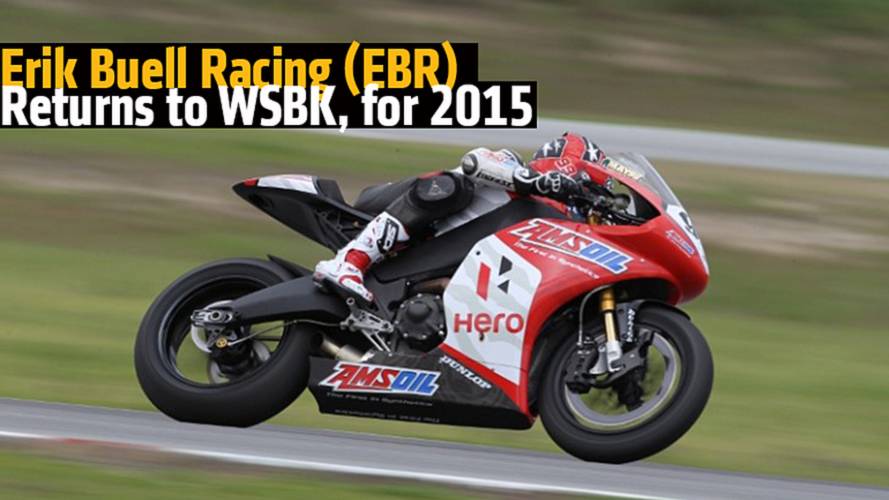 Team Hero EBR will be back for another season in World Superbike in 2015. Do they have the ingredients in place to become competitive?

The 2014 World Superbike season was a tough one for Team Hero EBR. A brand new motorcycle, new tires, and tracks the team and riders had never seen before meant they spent the year well off the pace of the leaders. There was little reason to expect their return for another season, given the small amount of progress through the year and the immense challenges involved in securing the capital required to contest an international championship.

But then, Erik Buell has never been one to do the expected.

Yesterday, EBR announced it would be returning for 2015, with a new rider lineup and team structure. Geoff May and Aaron Yates will be replaced by AMA Superbike veteran Larry Pegram, who scored the only world championship points by an EBR in a wildcard ride at Laguna Seca, and Niccolo Canepa, who finished runner-up in this year's EVO class aboard a Ducati Panigale. Pegram will also serve as team manager, a role he has filled for years in the AMA Superbike series, where he ran his own team.

READ MORE: Erik Buell Racing - The Past, Present and Future

"Our points finish in WSBK at Laguna, and podium finish in the last AMA race weekend show the potential of this motorcycle," Pegram says, "and also convinced me and EBR that Pegram Racing could play a major role in moving the EBR World Superbike effort forward."

Canepa is a journeyman racer with experience developing a broad range of machines. He has raced in World Supersport, Superstock 1000 and Superbike, and aboard Grand Prix machines in Moto2 and MotoGP. He served as a factory test rider for Ducati in 2008. After racing against the EBRs this season, and was impressed with what he saw.

"By the end of 2014 the 1190RX was getting quite fast," Canepa noted. "They came a long way from mid-season and really got my attention! I am looking forward to being part of the next step up in performance."

One of those next steps up will need to be more power from the big v-twin. Next year's more restrictive WSBK rules package will help close the gap, as engine modifications and electronics will be curtailed in an effort to lower costs. But at some tracks this year, the EBR was giving up as much as 40 km/h on the straights, which is something you can't make up just with good handling and inspired riding.

With a full season worth of data and the addition of an experienced international rider, EBR should have what it needs to make serious strides forward next year. If they don't, it will be back to the drawing board for Erik Buell once again.