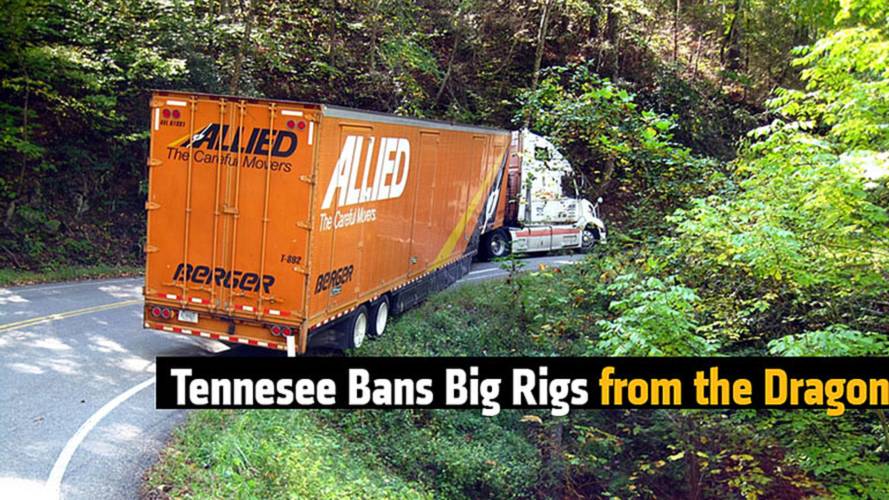 Tennessee bans big rigs from the Tail of the Dragon.

If you understand the title then this is a red letter day for you! If you don't, we'll explain.

The Tail of the Dragon is one of the country's best riding roads - 11 miles and 318 turns of motorcycling bliss located between the Tennessee and North Carolina borders. Well, it just got a lot better.

One of the many complaints about riding the Dragon has been the tractor trailers that were allowed usage of the road. Why is that an issue? They don't fit, required guides to help them navigate the road, and in many cases took up the entire width making it all but impassable for other vehicles. If you've ever seen a bright yellow GoldWing riding the road it might have been Yellow Wolf. He made arguably more passes on the Dragon than anyone, both escorting big rigs and also offering video services for riders. Check out a video of him shredding the Dragon on a giant behemoth of a Wing.

The Tennnesee Department of Transportation did a traffic study and finally came to the conclusion that everyone else already knew. Looking at the data they found from 2010 to 2012, there were 204 total crashes from the Tennessee/North Carolina State Line to Tabcat Bridge (Log Mile 11.19) in Blount County. There were 6 fatalities out of those 204. They considered this a critical number of crashes based on vehicles per day on this road. Only one of the fatal crashes involved a tractor trailer, but there were a number of incidents involving large trucks. Due to the curvy and narrow roadway, incidents involving tractor trailers usually block the highway for several hours and prevent travel for all motorists.

You can see why trucks on the Tail of The Dragon can be a problem.

North Carolina has had similar restrictions for truck traffic on the NC side of the road for several years so this just makes sense.

Have you ridden the Tail of The Dragon? What do you think of this new law?