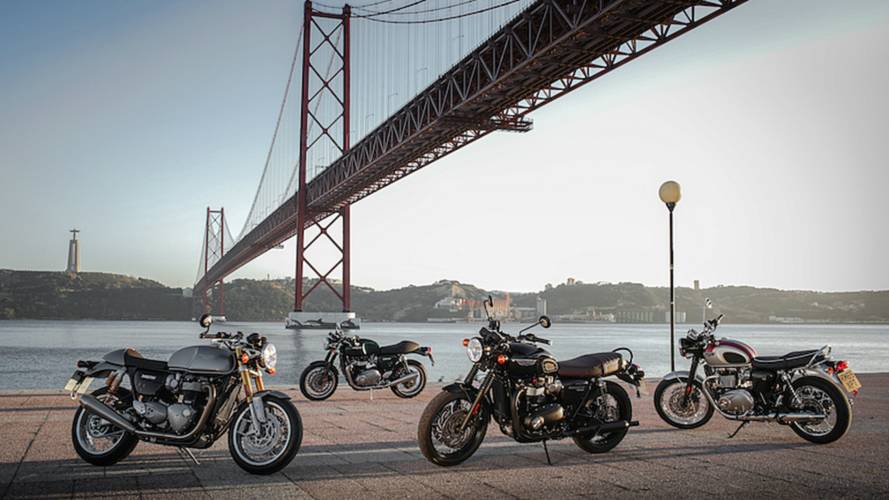 Triumph has revealed US pricing for several of its most-anticipated 2016 models: the Bonneville T120 and Thruxton variants.

The Bonneville platform has served as the heart and soul of Triumph's lineup for roughly half a century and has been completely overhauled for 2016. Most notable among the changes is the new 1200cc liquid-cooled parallel twin that powers both the Bonneville T120 and Thruxton.

However, that engine has been tuned differently in the two models to ensure they each have distinct character. The Thruxton has been tuned to deliver greater horsepower, whereas the Bonneville T120 has been tweaked to offer more immediate torque.

The new Thruxton will be hitting dealerships with an MSRP of $12,500 for a model in Jet Black. Whereas models in Pure White and Competition Green start at $12,750.

Both Thruxton models are styled to recall Triumph's Isle of Man TT racing successes in the 1960s, which inspired generations of café racers and custom specials.

Triumph claims the Thruxton and Thruxton R deliver an impressive-for-a-retro 96 hp at 6,750 rpm, as well a 82.6 ft.-lbs of torque. A clever liquid cooling system, carefully integrated to minimize visual impact, is at the heart of the new Thruxton being able to claim a 41% boost in power over the previous model.

Meanwhile, this Triumph brags of a fuel-efficiency and reliability that owners of original British twins couldn't have dreamed of: 46 mpg and service intervals of 10,000 miles.

Heated grips and cruise control are available as factory extras.

While the Thruxton is designed to offer a retro racing feel, the new T120 and T120 Black models have been tweaked to deliver the more relaxed old-school experience we've come to expect from the Bonneville.

Built to deliver more torque lower down and across the rev range, the T120s come equipped with peashooter exhausts that Triumph says deliver the genuine sound of a British twin. Both feature an all-new chassis and suspension developed for refined all-day riding.

The only real difference between the two T120 models is that the T120 Black has been blacked out to save you the pain of trying to take care of chrome. Priced at $11,500 it is the least expensive of the new big Bonnies. A Matte Graphite version of the the T120 Black is available for $11,750.

Power delivery on the T120s is less than on the Thruxton, with the 1200cc engine putting out 80 hp at 6,550 rpm. Perhaps confusingly for the claimed "high-torque" version of the engine, the T120's tuning delivers less torque than on the Thruxton. But, the T120s' 77 ft.-lbs. of torque arrives much sooner in the rev range, peaking at just 3,100 rpm.

Like the Thruxton variants, the T120s are equipped with ABS, ride-by-wire, traction control, Slip Assist clutch, LED lighting, a USB charge socket and rider modes. Though in this case, the T120s have only two rider modes, as compared to the Thruxton's three.

Perhaps to compensate, heated grips and a center stand come standard on the T120. Cruise control is available as an accessory. The T120 also boasts 10,000-mile service intervals but claimed fuel economy is considerably better, with Triumph claiming 63 mpg.