How My Moped Sparked A Thirst for Two-Wheeled Freedom 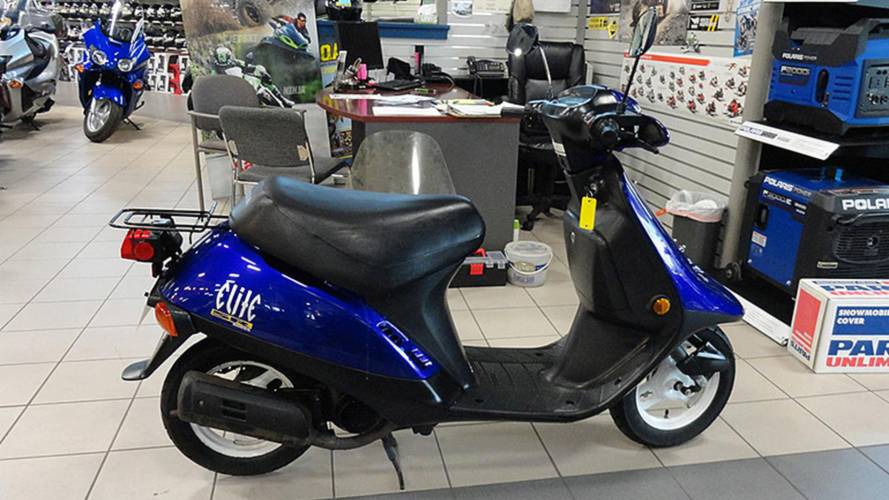 How My Moped Sparked A Thirst for Two-Wheeled FreedomThe Buy “You know it’s purple, right?” my dad asked like he already knew the answer. My cheeky...

“You know it’s purple, right?” my dad asked like he already knew the answer.

My cheeky grin slumped. The same semi-colorblindness (shade deficient, technically) that caused me to color so many oceans and skies purple in elementary school had struck again. This time it was the paint on a moped I wanted to buy.

“No, I thought it was blue,” I said as my solid, confident decision to become a proud scooter owner melted a bit. Today, deep violet is my favorite color on vehicles, as an insecure 14-year-old, however, driving a purple moped didn’t seem like the smartest idea socially speaking.

After some hard thinking and discussion with my pops, my excitement won out. We decided we could always just paint it and agreed it was too good of a deal to pass up: extremely clean, unmodified, and super low miles. So I gathered my $500 and traded it for a tiny set of keys. It was the most money I’d spent on any one thing.

I was the proud new owner of a Honda Elite 50, my first motor-powered vehicle.

The first thing my dad and I did was ramp up the 49cc munchkin. It was far too slow at first throttle tug, and the speed topped out at 25, both unacceptable. We took off the exhaust to get to a washer that is welded to the header. Completely untouched at that point, it had about a quarter-inch hole in it. We drilled that out to open up air flow, which helped with acceleration on the top end. Next was the limiter/restrictor, which is a plate on the back of the variator. By removing it, that bad boy could now go 35 mph. Maybe 37 with the wind or downhill!

Next was the paint. It's a shame looking back on it, because I quite like the color now and in order to paint it, I had to remove the stock decals, which is a pet peeve of mine these days. The process was a good starter taste of what it's like to deal with vehicle paint. There were only three pieces to take off, the headlight surround, the nose, and the hips. I sanded, sanded some more, sanded over my sanding, then sanded the sanded sand. I felt like grease was literally going to start dripping out of my elbow, but I wanted it to be perfectly prepped. Once it was as smooth as possible, we coated it in black and threw a clear coat on.

It was go time.

The fact that my parents, both by-the-book, err-on-the-side-of-caution types, allowed me to get a moped was a huge deal. Despite the low speeds, they saw it as adding unnecessary risk to my life. Naturally, I had virtually no thoughts of a moped as a dangerous entity— at least until that one time I clipped an unseen orange cone while going 40 mph on a 45 mph street at 1 in the morning...

To me the Elite was a means of escape. Not that there was anything terrible at home, but aside from a bicycle, I'd never had that type of freedom before. The scope on my map automatically doubled. Two of my group of five main homies already had them: one had a slow-as-hell Yamaha Vino, another had a blaring beat-up example of the same one I’d just bought. And though a scooter gang now sounds outrageously hilarious, it felt amazing. I could go anywhere without having to ask my parents for rides, and at 60-70 mpg on that sucker, it barely cost me anything.

Don't get me wrong, I still had to get permission to go places, but I was no longer subjected to those frustrating words, "I can't take you right now" or "you'll have to wait." The waiting was over. If I wanted to go get one of those weird fake coffee Moolatté drinks from Dairy Queen or drive across town to the park near my best friend's house for a game of pickup basketball, I could. One of the group's moms dubbed us the Moped Morons, a label we embraced fully by adopting ridiculous driving formations.

The nickname, though a joke, was a perfect example of the unfortunate stereotype that came with the low-powered two-wheelers. At least in my personal experience, scooters and mopeds are somewhat looked down upon. They're somewhat seen as a less-than-"masculine" mode of transportation, something used by delivery boys in cities, or an option for people who can't afford a car. That way of thinking is extremely closed-minded. I had an absolute blast with my Elite. At 14 I was still a child, and that Honda was essentially a next-level toy for me. But with the ownership came a sense of responsibility and pride that I've taken with all of my vehicles throughout my life. Just because they cost less or have less power doesn't make them any lesser of a street-legal vehicle.

Now that I'm older and have ridden and owned both mopeds and motorcycles, it's safe to say having the Elite was a solid preview of what I had to look forward to. They're extremely practical and can go and park just about anywhere, they'll keep money in your bank account with lower fuel costs, and even at low speeds the thrill of driving is largely amplified.

It shows you some of the negatives, as well. Being smaller than a motorcycle, you have to be even more aware of your surroundings and extremely defensive. You have to assume nobody sees you and your disproportionately large helmet— and even if they do see you, they'll probably dismiss you anyway. Gravel and dirt are major enemies, and taking corners is typically a "is today going to be the day?" event. That day sadly happened when I stupidly let a friend drive and I watched as he spilled going around the first street corner.

After about a year and a half, I got my permit and was ready to move on to four wheels. After buying the Elite for such a low price, I sold it for $700 and turned a $200 profit. You know, to pay for all those times I had to spend $1.50 to fill up the tank.

Disclaimer: The photos are not of my specific moped.