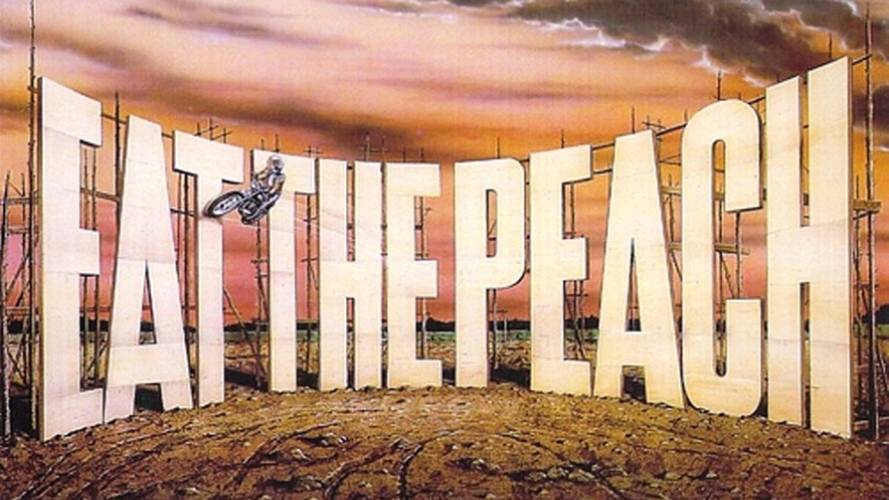 What better for this St. Patrick's Day than this little known Irish film? It's a shame that fame and fortune did not come to the people that made this movie, because it really is great, yet so obscure it doesn't even have a Rotten Tomato score. Like all movies set in Ireland (it seems), it starts with the protagonists losing their jobs when the local factory closes. "Eat the Peach" is basically The Full Monty meets Field of Dreams, but with a wall of death.

What? You aren't familiar with the motorcycle wall of death? The wall of death takes the banked corner of the old school board track races, and keeps banking it until it is 90 degrees...like an actual wall. Ride fast enough and the force of your angular momentum will stick you to the side, making an utter joke of gravity. It is the same way the carnies use centripetal force to steal all your pocket change on rides like the Rotor and Tilt-a-whirl.

So this film follows the adventures of quirky Irishmen, Vinnie (Stephan Brennan) who rides a Honda XL200, and Arthur (Eamon Morrissey) who rides a Honda ATC70, who live surrounded by nothing but peat bogs. Over a pint or several at the local pub they decide that the best way to make ends meet is to build a wall of death in the bog. Surely, out here where there are few recreational activities, or jobs, that don't involve peat, the excitement of motorcycles daredevils will be a huge draw. Also, they might actually die, which would also put an end to their problems. But first, they need to do some very scientific tests.

In the pictures above, they mounted a chair and arm to a cement mixer so they can spin it around until a 1-lb brick measures 2-lbs, which would mean a force of 2g pressing you into the wall. The second test is to see how easily you can get the bike up to the required speed, and the third test is actually learning to ride the wall. I can only imagine how much vomiting Eamon must have done on that day (days?) of shooting. Did I mention yet that all of this is based on actual events? Here is a news report from 1979.

Unfortunately, in order to finance the construction, the boys get mixed up with a local organized crime figure named Boots, who dresses like J.R. Ewing, but talks like a Yiddish cowboy from Brooklyn or something (I imagine his accent is exactly what we all sound like when us Americans try to do a British accent). Boots is happy to help out, and even help promote it, and he gets them both jobs working for a higher up crime figure smuggling goods across the border from the other Ireland. This leads to all sorts of misadventures, much like an Irish version of the Dukes of Hazard.

Unlike all the other films I've reviewed so far, this is actually a well made movie, with an enjoyable story, likable characters, an understandable plot, and a 100% positive image of people on bikes. This being the 1980s and Ireland, it is not a big budget film, but that is not really an issue. They manage to make it all work without special effects or CGI, but with just an actual wall or death, a good stunt rider, and a home built rig that may have been based on the cement mixer seen earlier.

Rotten Tomato Rating: None (though it has an audience rating of 25%)

RideApart Worth Watching: Did you not read any of what I just wrote? 100% yes, and have a pint or 2 as well.

Redeeming Quality: This movie is nothing but redeeming qualities. It was a quirky little film back when it was made, with a good script, good performances and fun story. Now it is a snapshot of life in rural Ireland during the times of the troubles and before they became a popular tax haven for various corporations. It is similar in tone to the movies made here in the late 1970s early 1980s when America was in a downturn and it seemed every factory was closing, only without Micheal Keaton, who seemed to be in all of them.

I especially enjoyed the way, out there in the peat, nobody questions an ATV70 as a viable way to commute to work and the pub. And how it seems the roads are optional, because you can just navigate as the crow flies, across the bog, and not worry about damaging anyone's peat harvest.

Things to watch for: Watch as the boys strike an unintentional blow for free Ireland and the IRA by running out of gas.

Witness how, in Europe, 3 people will happily pick up a truck load of beer and ride home in something about the size of what we  use to drive around the golf course. Also, how unlike in America, there doesn't seem to be any stigma associated with a man giving another man a ride on the back of his motorcycle, even if they aren't close friends, relatives, or teenagers.

Worth Noting: For a double bill of crazy guys in the British Empire riding bikes, pair this with "The World's Fastest Indian".

"Eat the Peach" is available in it's entirety on YouTube, but there is a glitch towards the end and about 5 minutes is just purple screen with audio, but perhaps that was just an issue with my system? You can watch the whole thing here, or right here.

Pictures courtesy of RTE, and Charles Winters of Messhams Wall of Death.