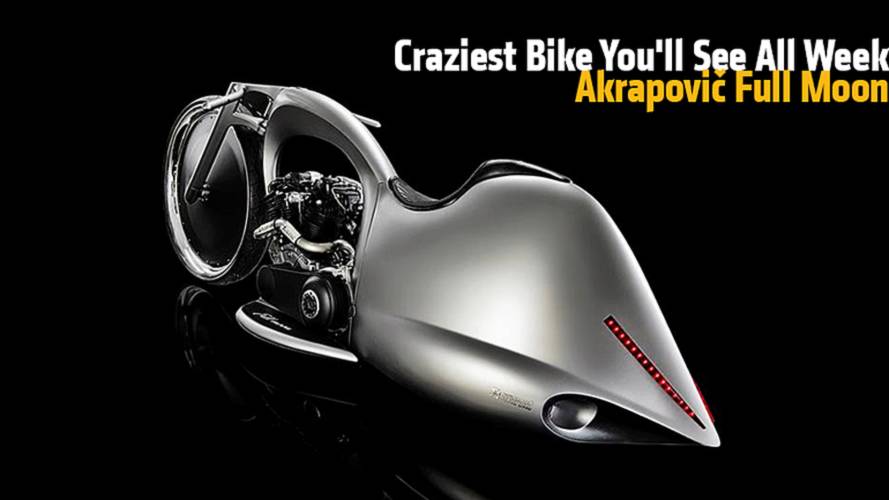 Check out the latest factory custom from Akrapovič , the Full Moon.

Akrapovič is in the business of making high performance exhaust systems for motorcycles; they are not in the business of making motorcycles, usually. So what do you do? Put them on a rack on the wall like so many other vendors? Akrapovič decided to go a little further and while this is not the first time they have built a custom motorcycle to do it, their new bike is definitely going to cause some discussions.

READ MORE: How To Winterize Your Motorcycle In 5 Steps

Let's get one thing out of the way up front. We get it this is impossible to actually ride other than at a show. It's art, a mobile display case for an exhaust, and very American Chopper in its complete lack of actual motorcycling acumen.

It does however feature a rear end that Sir Mix-A-Lot would sing about. This thing has back, and lots of it. Hand sculpted out of sheet metal and taking over 800 hours to beat into submission it makes for a very special exhaust housing. You can see in the pictures how large it is when you compare it to the 93 cubic inch S&S Knucklehead motor.

The bike is outfitted with hydraulic suspension allowing it to be dropped on the frame instead of an unsightly kickstand. We are a little lost on the next feature. "The steering is completely automated, which allows a minimalist steering rod without any visible cables that would otherwise be required for the bike to function." We would love to hear what you think that means.

To go with that "unique" steering head is a 30 inch composite wheel, mated to a composite perimeter brake. A first and hopefully last pairing of pieces this garish.

The exhaust is a custom one-off and the bodywork is an integral part of the exhaust system. According to Akrapovič the entire bike is an exhaust with wheels and even the frame is built as part of that concept. When's the last time you saw a hand formed sheet metal frame?

READ MORE: Listen to the Blissful Sound of the All-New Ducati Scrambler with Aftermarket Exhaust

I can't decide if I like, hate it, or if there is another level of dislike I prefer. It has a 1920's stream liner feel about it that appeals to me. The simple issue is, it is really just to look at or listen to as it were and I prefer to ride. What's your take on Akrapovič's Full Moon?