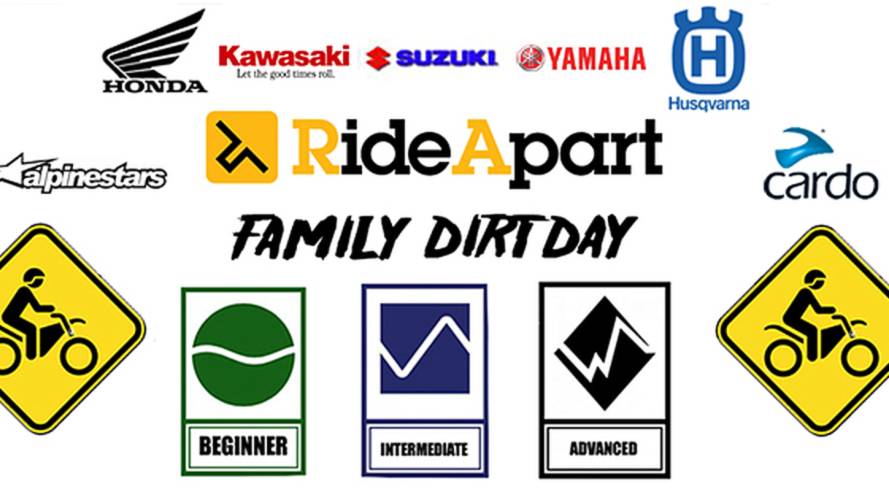 The idea behind Family Dirt Day was to create a real-life dirt bike riding experience — not the kind of straight-down-the-middle motorcycle review/shoot-out that you'd see in a magazine or specialist website. Something closer to what it's really like to go out dirt bike riding with a family or group of friends, where there's a collection of different bikes and riders of different abilities.

When I began making calls to the different enduro bike manufacturers, I thought that best case we'd get three or four enduros to ride. Never in my wildest imaginings did I expect that a month or so later I'd be picking up bikes from Yamaha, Kawasaki, Honda, Husqvarna and Suzuki, and sending out invites to 20+ moto journalists, dirt-bike enthusiasts, riding instructors and beginners.

In addition to support from the big bike manufactures, we also brought Alpinestars on board. Heath Ma'alea Cofran was on-hand to offer loaner gear and technical support. The support from Alpinestars really helped make the event a success by ensuring that everyone was as safe as they could be with proper boots, armor, riding pants and more.

Cardo Systems also supported the event with their Scala pack-talk com systems. They provided six units, which we planned to test and evaluate in real-world riding conditions.

For a week straight, I was making runs all over Southern California, picking up and signing out bikes, filling my driveway with more machines than I could manage. My neighbors no doubt hated me as I endeavored to learn by trying that you can, in fact, have too much of a good thing.

Our plan was to stage the two-day event at an OHV area called Rowher Flats, just north of Los Angeles. I go riding there all the time, so thought it'd be a perfect place to get everyone together. As the weekend approached, a wave of El Niño storms made their way through Southern California, and there were some fears that the weekend would be washed out by the pineapple express. As our photographer Andre Pinces and I loaded up the caravan of vehicles on the Friday before the big event, the last of the predicted storms pounded LA.

Our dirt-bike motorcade consisted of RideApart's Dodge Promaster cargo van AKA "Master Blaster," a borrowed 17-foot motorcycle trailer and my 1991 Toyota SR5 4x4, all stuffed with a total of 13 enduro bikes that ranged from 125, 250 and 450cc 4-strokes.

The road into the Rowher Flats OHV area is three to four miles of dirt that traverses some steeply inclined sections before descending into the valley where we would stage the event. With Andre at the wheel of my 4x4 and me piloting the loaded "Master Blaster" with loaded fun-hauler in tow, we became separated on our way into the park when I stopped to buy some firewood.

When the pavement ended, the dirt road pitched up sharply. Not more than 100 yards up the steep and sodden road, the front-wheel drive of the ProMaster lost traction and the wheels began to spin. The weight of the trailer kept the front wheels from biting, and suddenly the whole rig sliding backwards down the wet dirt road.

Even under ideal conditions, I'm not a pro at backing up a vehicle with trailer in tow. I don't do it everyday, so it isn't second nature to me yet. But there I was, doing an emergency back-up, on a slick dirt road down a 15 percent grade. Just as the ass-end of the trailer began to jackknife, I managed to bring the whole caravan to a stop.

Thankfully, I didn't lose the trailer down the side of a ravine, along with all the expensive press bikes in it. Deciding to quit while I was ahead, I unhitched the trailer from the ProMaster and waited for Andre to come back down the road with the 4x4.

When we finally reached the staging area, the tropical storm unleashed its last torrent of hail and rain onto the valley before finally blowing through, leaving a crisp, clear nighttime sky.

Perhaps the adventure of getting the bikes into the valley was a sort of foreshadow for the drama that awaited us the rest of the weekend. Those stories will be revealed in the coming days as we post the events of the weekend as seen by the others who came, saw, and rode some amazing dirt bikes.

The Stories of the Dirt

In the coming days we'll be posting the stories from the riders who participated in Family Dirt Day. The highs, the lows and our run-in with the law. Don't expect to read about the winner of a "shoot-out," or "dirt bike of the year." Instead, you'll read about the motorcycles people connected with. You'll also hear from beginners to advanced riders, and learn that, as it turns out, everyone can have their own favorite motorcycle.