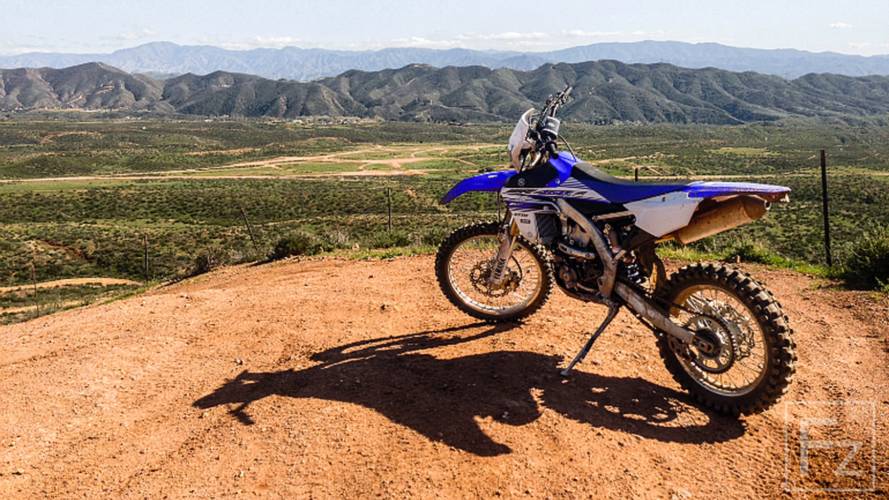 This weekend was loaded with detours. Instead of attending what had become a spring ritual,— a ride with Jimmy Lewis at the AltRider event in Pahrump, Nevada— I took on the task of helping another publication do what needed to be done: Ride motorcycles.

At hand was a collection of nearly a dozen enduro bikes from a handful of top manufacturers, with a few random others thrown in due to scheduling snafus and for the sake of doing it differently. It was something I used to do a lot of at my first magazine... “It ain’t the tool,” we used to say and the adage still applies. It isn’t necessarily the machine that will deliver you the adventure, but the act of doing so.

Back then, we regularly did comparison tests, but of unlikely pairs (or in thirds). For example, we might pit an MV Augusta supersport against a Harley-Davidson Sportster versus a KLR. Not exactly that mix, but something like it. Sometimes by design, other times by force of (business) nature.

Here, RideApart had a handful of bikes — some that fit the mold, and a few that didn’t. Then, they threw in a collection of staff and family to create something they’re calling Family Dirt Day: many machines, many skill levels, and many memories!

On deck were a bunch of machines that I didn’t know much about prior to the invite (not yet anyway), and a class I’ve been forgetting about completely since the rising tide of big adventure bikes came in and stole my attention from most other riding machines. Not that I’d ever forget them all, but I can’t ride them all at once so...one mile at a time.

Of the stable they brought to the countryside, I managed to get a leg over a few of them— for just a few miles —but also enough to know I wanted more. Scratch that, needed more. There’s a story brewing in this head, one about shaving weight by riding off the pounds. When it comes out, you’ll know about it. But until then, it’s about the braaaps at hand.

The Rohwer Flats OHV park is only 40 miles from downtown Los Angeles, but seems entirely removed from civilization— though not the feds. Our collection of machines and riders came in for a few nights of lying face-down to watch the stars in the sky, plenty of mental tongue twisters, and hours upon hours of random television and movie references by the fire. All between a couple of great days in the saddle.

Or so it was supposed to be. Once the group brought together the crystals, it shone a touch too bright to slip past the park rangers’ attention. Doing their part for us all: Keeping the landscape safe by enforcing spark arrestor laws, and watching for unregister/un-stickered bikes and stolen ones. Sometimes, they go a little too far — everyone does. Ultimately, as in our case, when matching green stickers, VINs, and DMV records don’t match theirs, you get shut down. So instead of two solid days of ripping through the park with drooling smiles on our faces, we got only one and were relegated to focus our attention to the crew of 4-wheelers swapping a Jeep’s axle all day, into the night, all while clinging to the mountainside above our camp. Our fun was ended, but at least we had one good day!

All that said, I managed to tool around the larger trails on my rental GS from RawHyde Adventures as well as some more entertaining tours of duty.

“Grab a bike and follow me,” one of the reps said, saddled with his own 250 two-stroke on full knobs. My eyes caught it because I’m on a DR-Z 400 (2016 MSRP $6599) with round tires, and I feared the trail he might lead me on. Helmet on, and throttling on, not only was I able to track along at a common pace— huffing loads of that memorable blue stuff —but those dually rubbers also held on surprisingly well. And the engine became the star of the show, providing easy-peasy low-speed trolling, as well as revved-out crawls up the wall (unexpectedly) at the last second without missing a beat. Although I did manage to fall out of gear a lot, mostly by human error. As a dual sport machine, the footpegs have rubbers I failed to remove before we splashed our way through the unusually-wet desert puddles. I slipped off a few times, knocking the lever from second to neutral more than I intended to...next time I’ll know.

We wound up calling that bike the sleeper of the collection, surprising everyone that rode it. Although, that’s to be expected from a bunch of street riders part-timing as Dakar dreamers.

In the truer enduro class, the Yamaha WR450F (2016 MSRP $8990) seemed to take the prize among those that put it to the test. The bike is hung from a high-speed desert-happy suspension set up, and packed with a two-stroke reminiscent engine. Peaky and strong, tall and “heavy” (solid), it gathered lots of attention from attendees and passersby in the pits. For myself, I thought it would only be happy at a faster pace than my own...like a stallion kept in the pony’s corral.

The faster-in-red Honda CRF450X (2016 MSRP $8440) felt more at ease in my control. Plus, it felt as familiar as the last CRF I rode, back in 2009, when this machine also started its run in this current form. Back then it was a new model and I got to ride it in Moab, Utah for a few weeks on loan from Honda. It became “the old friend” every Honda does, and this weekend’s ride was instantly familiar. From the raspy idle to the narrow body and block pattern in the grips, it was an easy bike to ride on both occasions.

Lastly, I took the Husqvarna FE450 (2016 MSRP $9999) for a spin. This one is built championship tough with a lowered suspension, WP suspension set up, and rear link set up. However, I found it a touch too narrow to grasp with my knees. This problem lasted for about half a day before I recognized that this little detail is actually a feature instead of a curse. It's narrower than the other bikes, well sprung, and more rounded out in terms of engine feel— as if it might have been a 650 stuffed into the shell of a 350 —I think this bike might be one I could grow into, with pleasure.

Of course, I need a ride longer than the parking lot: Remember, I’m just here crashing someone else's party. The other folk are the testers at the first ever RA Family Dirt Day, I’m just a schlub that showed up looking to ogle the bikes and drink their beer after dark.

But how do they stack up on paper? You’ll have to read the full review over here on RideApart for that! Just go away knowing they're all water-cooled now (“it’s all ball bearings these days”), with electric starters and headlights. They also require properly registered green stickers (especially in Southern California, believe me!) or a license plate (in the case of the DR). Rock on!