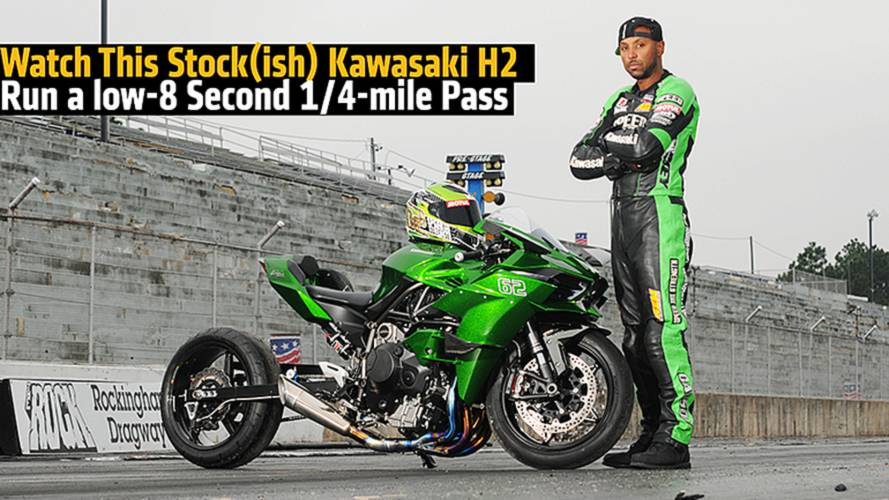 Kawasaki made history with the H2R unveiling - the biggest hp number ever put out by a major manufacturer. A bunch of firsts for Kawasaki, it was big news and love it or hate it, it seemed right that it received as much attention as it did.

Then the Kawasaki H2 was unveiled, to decidedly less accolades. The H2R rated at a whopping 300hp; the H2 was a letdown with 200hp (did we ever think we’d reach a day that 200hp on two wheels was a let down?).

BMW wasn't going to lay around and wait; they introduced an upgraded S1000RR, with 6 more horses matching the H2's output. But BMW did this with fewer pounds, 449 pounds (wet) to be exact, compared to Kawasaki's 524 pounds (curb weight). It would seem Mean Green has more competition than we expected.

The drama and Track Wars seemed to be over before they began, as excitement died down for the H2. Now, we have new hope!

Yesterday at the New York International Motorcycle Show, Kawasaki unveiled their specially designed Kawasaki H2, built by eleven-time drag racing champion Rickey Gadson. Kawasaki won't release a ton of detailed information about the bike, but what we can tell so far is that it's basically stock - and that's a good thing.

The guys also installed a handlebar-mounted air shifter that works with the Kawasaki Quick Shifter along with a JRI rear shock for more added bite. For a quick drag bike, that’s not a lot of upgrades.

Why You Should Care

This specially-built H2 drag bike has been the first H2 to put rubber to pavement that wasn’t wrapped in secrecy. Watch below to see a 8.213 1/4-mile ET at 166 mph. These are the first performance numbers we've seen (other than hp and torque numbers).

This isn’t an earth-shattering number and other liter bikes have run as fast, but the important thing is the potential that it shows. When you’re running this fast, every little details can make big impacts, like the fact that Rickey is running street tires, it was a cold day, the track probably wasn’t prepped and there's been absolutely no tuning on the engine. That’s the cold, bone stock H2.

Most BMW liter drag bikes run similar times, but after some tuning, a lot of prepping and a lot more grip. This gives Kawasaki new hope that the heavy green bike may be able to take on the Germans, in a motorcycling World War.

Rickey’s information in the video is pretty limited, but after talking with some of the parties involved, it’s surprising that they're very tight lipped, hinting that there is still something left on the table. No one will release any information about the bike, because it sounds like this is a teaser for something else coming with this bike or others.