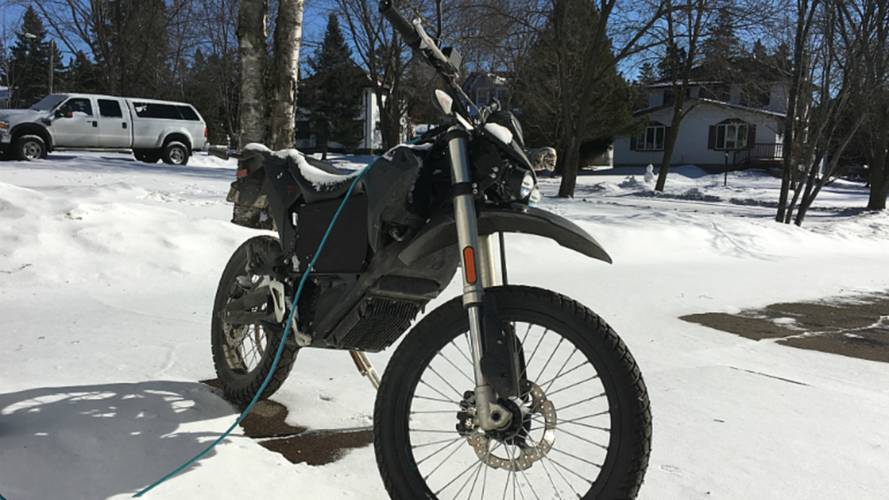 As Aerostich's Zero Below Zero experiment winds down, Andy breaks down the changes he'd like to see after a winter astride the Zero FX.

Today it’s my ‘turn’ again...rode the Zero home last night. It’s been a few weeks. This little electric winter riding experiment will be ending soon (a month? Six weeks?), and I’ll be sad to see the Zero get crated up and head back to California. The experience of riding an electric bike over the course of this winter has been eye-opening and good.

Us trading off has been particularly fine... It’s funny, but if the bike were actually mine I’d have less problem letting others ride it than if it were a gasoline powered machine because it’s so simple. There’s nothing to adjust, manage or break. After using it off-and-on this winter I’d buy one, and I think so would my coworkers. It's so nice just to turn it on and go. No warm up, maintenance, nothing. Just ride.

My guess is large numbers of people will switch to electric cars and bikes for their daily transportation applications over the next fifteen or twenty years as more come to realize the hidden advantages; the ‘plug and play’ simplicity mainly. And as the prices of the vehicles continue to drop and the ranges of available vehicle types widens further. Eventually electric vehicles should actually end up being lower-priced than combustion vehicles for reasons inherent to the underlying technologies involved. At that point the electric vehicle market should explode. We mostly just want to get wherever we are going as easily, comfortably and inexpensively as possible.

The temp here was in the low forties last night and it’s in the mid-forties and sunny again today. In these warmer temps this bike is just a zippy little monster and its stealthy silence makes you want to ride even more ‘entertainingly’ than you otherwise would aboard your trusty ol’ combustion motorcycle. Every pass of every car is an ambush. Nobody around you understands how nimble and torquey the Zero is. You always want to zip right ahead, around and through whatever is just in front of you, grinning because before others in traffic quite realize what happened, you are already gone. No noise, no harm, no foul. With one of our Lane Share Tools out back, this thing with a young rider aboard would be a social and traffic pariah…but at least it would be a quiet pariah. Motorcycles have always been partly about riding through loopholes in the transportation matrix, and for this benefit (of riding), a Zero like this perhaps is the best tool/weapon yet devised.

What would I change? Other than the inherent and huge compromise with tires (not enough gnarly sharp carbide tipped suds for real ice-and-snow mayhem and a much lower rubber-against-dry-road traction limit on clear roads)? Not much. Here’s my shortlist, not in order of priority:

It’s fine during the day, helping drivers see you, but for long winter nights it’s terrible. There are some large aftermarket LED headlights available which don’t draw much power and are very bright. I’d have a nice big 7 or 8” round one, thank you.

I’d install the electric grip warmers which go underneath the stock grips for a smaller-diameter grip feel.

Wayyytoooosmall... Solution…Zero? (My personal fender-styling taste for a bike like this would be plastic versions of the curving steel fenders that were on the old '68-70ish Yamaha DT-1 'family' of not very hard-core on-off road bikes. High front fenders for dual-sport bikes are way over-done for how these types of bikes are actually used in the 'real world'. Plus, 'retro' style seems more fly-dope-hip-whatever in custom bike styling circles, for bikes like this, at the moment.)

And the Zero’s optional one-handed 220V near-universal electric vehicle plug plus our 110v extension cord socket, both at handlebar level.

Maybe only an inch or an inch and a half. I’m 5’8” and for commuting lower works a bit better.

The steering lock changed so it locks the handlebars in the straight ahead position. A personal superstition...I’ve always disliked the way locked bikes looked with their handlebars flopped over. Bikes at rest look their best when the front wheel is lined up with the rear. They express sort of a gazelle-like grace that way. The forward motion potential is obvious. As ‘art’ or sculpture that is how motorcycles are always displayed. Locked the way they must be with their forks flopped to the side they imply going round and round in a circle. Or falling over. Who wants that? We humans want to see the potential of the far horizon displayed.

There are historical reasons locked handlebars are always at the side. Until recently the fork lock was separate from the ignition so if the bars were locked straight ahead one could possibly start the bike and accidentally ride off not realizing…and then crash, which would be a product liability nightmare. Now that the fork lock is integrated with the ignition this would be impossible, so why not change the tradition and let me lock my bike’s forks in a straight-ahead position that looks right? The theft deterrent of a non-steerabillty is the same no matter what the locked position is.

Those little fake-looking plastic ‘wings’ on either side of the frame up by the steering head need to go away, and I’m sure the Zero’s designer(s) can find some other surface where the company logo would look just as nice.

About the only other thing I’d do differently if I’d actually owned this bike when we started back in December would have been to heavily spray-coat the engine and other corrosion-sensitive components with something like Boeshield but we were deliberately trying to slightly abuse it, so that didn’t happen. That’s it. It’s been the most ‘plug and play’ motorcycle I’ve ever enjoyed. And the most winter-friendly, at least in an urban commuting role. I might keep the add-on skull, too.

Rider factoid: Rode about 80 miles directly across ice-covered western end of Lake Superior in the particularly cold winter of 1994.