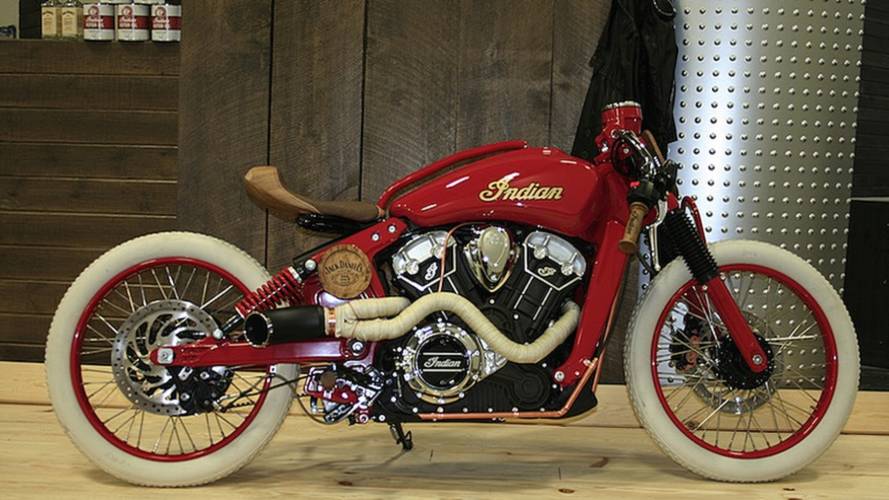 The winners of Indian's Custom Scout Build-Off are here!

A boardtracker-inspired custom Scout from Canada has won Indian Motorcycle's "Build a Legend" competition, beating dozens of other bikes from around the world.

The "Boardtracker," built by an Indian dealership in Terrebonne, Quebec, was among 35 dealer customs taking part in the worldwide contest. Dealers were given mostly free reign to customize a 2016 Indian Scout using any theme, style, or budget they chose as long as it incorporated at least three genuine Indian Scout accessories from the current catalogue.

All 35 submissions can be viewed on Indian's website, and offer a number of visions as to what other directions the Scout platform could go. There is a dirt tracker, of course, but also two sidecar rigs, a cafe racer (of sorts), and a two-wheels-up-front trike.

"The Rebel," by Indian Motorcycle Winnipeg

“Motorcycling enthusiasts have been drawn to the Indian Scout as the ideal platform for customising for over 100 years,” said Reid Wilson, Indian Motorcycle marketing director. “In fact, the historic 1920 Indian Scout that broke the under-1000cc land-speed record in 1967 at the Bonneville Salt Flats...was among the earliest custom Scouts."

Indian enthusiasts were encouraged to vote on the bikes through the early part of 2015 and a shortlist of three custom works was put together for Daytona Bike Week, which took place earlier this month.

Fans at the event offered their own opinion, choosing the valance-fendered Fusion, which looks a bit like a mini Chief Classic. However, the judges chose the Boardtracker, which its builders describe as "a tribute to the legendary Scout who used to race on board track" (try saying it with a Quebecois accent).

Equipped with 26-inch wheels and seemingly incongruous Jack Daniels-branded farkles (although, Indian has recently partnered with the whiskey brand, so it makes some sense), the Boardtracker is one of the few customs that sees the pegs moved rearward.

An additional "Builder's Prize" was extended to a custom known as "Ol' #71," designed by Heritage Indian Motorcycles of Northwest Arkansas. The bike was designed as a tribute to two-time AMA National Champion and Indian Wrecking Crew racer, Bobby Hill, who raced through the 1940s and 1950s. Hill, now 94 years old, gave his blessing to the bike and his signature can be found on its tank.