We Review a Cop Bike… Sort of. The 2015 Kawasaki Concours 14 Review 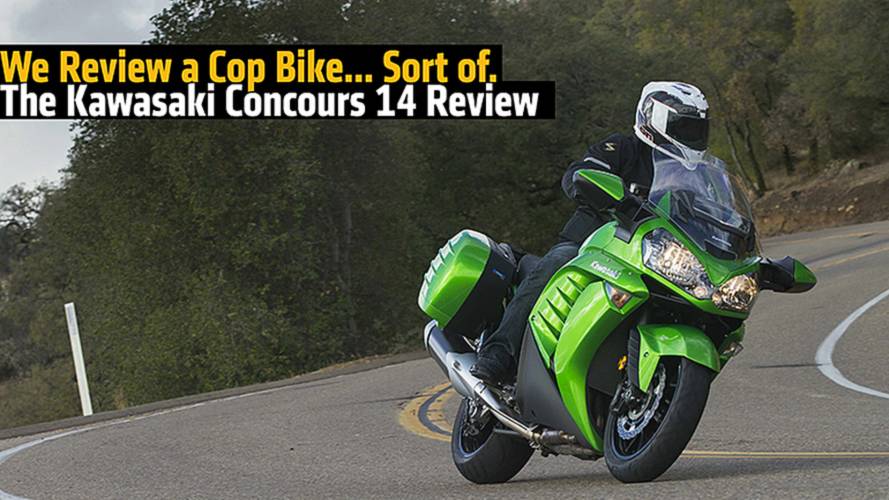 There’s a reason why law enforcement officers all over the nation ride Kawasaki Concours 14s: They’re lightning fast, all-day comfortable, stone reliable, and handle far better than a motorcycle this size has any right to.

Save for the police-specific parts like radios, lights, gun racks and other military-grade hardware, the police-spec Concours 14s are identical to the civilian versions. Interestingly enough, we hear that some departments actually limit the top speeds of their Kawis for liability’s sake – making them slower than civilian-spec versions. We know what you’re thinking, and it’s not worth it. After all, as the adage goes, you can’t outrun the radio!

Lawless daydreams from a 007 movie aside, there’s a reason why the Concours has one of the largest fanbases in the sport - because it works. The 2015 model brings with it a raft of small but significant updates to a tried and true sport-touring package that’s remained largely unchanged for eight years.

That might seem like an eternity in the ever-changing motorcycle industry, but when the all-new Concours 14 hit showrooms in 2008 it was so far ahead of the competition that it only needed a round of small updates in 2010 to stay out front. Truthfully, it was only in recent years that the big Connie (its longstanding nickname) started showing its age.

Simply put, a lot has changed in the sport-touring world in the past few years, as time and technology marches on. What was once cutting edge and blindingly powerful is suddenly yesterday’s news. Overnight, the competition transformed into rolling computers with heated this and heated that. But warm backsides and hands aren’t all; on-the-fly electronically controlled suspension, user selectable traction control systems and cruise control have also become standard issue. Of course ABS is now commonplace, as are electronically adjustable windscreens and powerful motors; heck, there’s even a six-cylinder on the market. Suddenly an understanding of C++ and binary was required to operate modern sport-touring machinery. But technology wasn’t all that swelled either, as prices also ascended into new-car territory.

Almost overnight the once gizmo-rich Councours 14 seemed dated. This isn’t to say the Kawi was any less of the high-speed, cross-county tourer it had always been. It just meant that if your criteria for the best sport-touring mount included the latest tech, the Kawi no longer ruled the roost.

Everyone wondered how Team Green would respond to the competition. And as it turns out, rather than keeping up with the Jones’, Kawi played a card nobody saw coming - performance and price. Rather than lay on the tech and watch the MSRP skyrocket, Kawi added key upgrades to an already solid performer. They also made a move for the record books by slashing the MSRP from $16,199 to just $15,499. In an era of less for more, that’s a lot of bike for the price, especially considering the bikes from Bavaria easily top $20,000.

But don’t think for a second the Connie is down-market; because it’s every bit the bike it’s always been, but now with better bang for the buck. Standard features include ABS, linked braking, traction control, saddlebags, adjustable windshield, heated grips, proximity key, and more.

In a segment chock full of rider nannies and electronic crutches; it’s nice to have enough rider aides to keep things comfortable without dulling the fun.

The tried-and-true 1352cc inline four-cylinder (a softened version of the ZX-14 mill) is as potent as it’s always been; with 102 lb-ft arriving at a low 6,200 rpm. Although Kawi doesn’t quote horsepower figures, it’s highly documented to pound out more than 140 hp. Heck, some strong-running stock examples make nearly 140 hp at the wheel.

Its over-square design would lead one to believe the engine lacks grunt, but credit variable valve timing for an endless well of torque–no matter the gear or the rpm, simply turn the throttle and objects in the mirror disappear.

The unique monocoque aluminum frame still surrounds the mighty motor and the fully adjustable (preload and rebound damping) suspension still works exceptionally well. As mentioned, the bones of the bike remain, but much of the package as been massaged for better form and function.

-A new steering stem seal is said to provide lighter steering feel at slow speeds. While we couldn’t directly compare the new model with the previous to substantiate the claims, the Kawi steers far lighter than its fully fueled weight of 688-pounds would lead one to believe.

-Lower First gear ratio for easier starts and low-speed maneuverability. The lower cog was immediately noticeable while accelerating from lights. As an added benefit, the typical Concours clunk when selecting First gear from a stop is all but gone.

-Stiffer rear suspension settings improve solo-rider performance and two-up carrying capacity. Suspension action on the Connie has always been good, and during our solo spirited jaunt through the San Diego hills there was nary a hint of wallow.

-Sculpted seat and optional Touring Seat. Thankfully a 2014 model was parked next to the current example when we returned from our day of riding so we could directly compare the two seats. Only when the two are next to one another is the narrower front section of the 2015 model more apparent. The saddle is every bit as comfortable, but it’s now easier to touch the ground since one’s legs aren’t forced so wide.

-Electronically adjustable windscreen with three-position vent. The new windshield with adjustable vent does wonders for wind protection at all heights and is easily tall enough in the most upright position to create a still pocket of air for high-speed cruising. The vent is great for cutting wind buffeting and introducing some air into the cockpit at speed.

-Revised ABS system with reduced linked-braking effect. Experienced riders will rejoice at the more traditional feel of the Kawi’s linked-braking system that allows for more weight transfer and control of fore and aft movement with the brakes. While grabbing either end of the brakes still commands some use of the binders at the opposite end, it at least feels more traditional from the saddle.

- Other small, but noteworthy additions include a revised heat-shield on the muffler to further deflect heat on the legs along with subtle, but classy bits like silver gauge bezels and smoked fluid reservoirs that are transparent until they’re admired next to the clear ones of old - their up-scale look is then immediately apparent. A standard tank protector is also standard issue.

San Diego might only get 10-inches of rain a year, but in the days leading up to our ride, it dropped a third of it overnight. Nonetheless, the morning of the ride brought with it plenty of sunshine that dried the roads with every waking moment. But as expected, it was damp and slippery before lunch - perfect conditions to try the traction control, linked-braking and the ABS.

Although mid-corner front-end grip was puckering at times, on-throttle drive and braking were drama-free thanks to the Kawi’s electronics. Adjusting the linked-braking system on the fly truly nets perceivable differences and for the record, I liked it more in the “natural,” position no matter the circumstances.

Windblast was non-existent and this author’s 5’ 10” frame fit just as well behind the windshield at full mast as it did in the lowest position where wind was directed up and over my shoulders.

Power is abundant everywhere on the tach and Kawi has geared the Connie so tall that the minimal vibes that creep into the bars around 5,000 rpm don’t register until well into the triple digits in top-gear.

As mentioned, no bike this big should handle this well. Bend the big Connie into some corners and it makes quick work of all but the tightest of turns. Smooth throttle and braking transitions are made easy with the linked braking and the smooth throttle-mapping, which means should you botch a corner, simply look for the exit, pick up some throttle and your mistake becomes but a fleeting thought.

There's little to fault with the Connie, as it piles on the miles with serious ferocity. Thankfully the new seat with its narrower front makes it easier to touch terra firma without sacrificing any comfort to the chubbier one it replaces. Solid wind protection, comfy ergos and capable performance mean nothing without enough fuel to prolong stops, but thankfully the big Kawi has plenty of range thanks to a 5.8-gallon tank and nearly 40 mpg on the highway.

Sure, the big Kawi may not have a cruise control or all the techno features of its competitors, but it’s also thousands of dollars cheaper. Software aside, you’d be hard-pressed to find a better sport-touring bike for the money. It’s as comfy as it is capable and as reliable as it is enjoyable. If you’re in the market for a full size sport-touring mount that eats miles with the best of them thanks to comfy ergonomics, solid wind protection and rider aids, the updated 2015 Connie is hard to beat. Did we mention it also runs bottom 10s at the strip, blows off all but the fastest of sportbikes and hauls a passenger and gear with ease? Some call that having your cake and eating it too, others call it the Kawasaki Concours 14 ABS.

READ MORE:  What To Do When The Police Pull You Over | RideApart

Photography by: Kevin Wing and Kawasaki