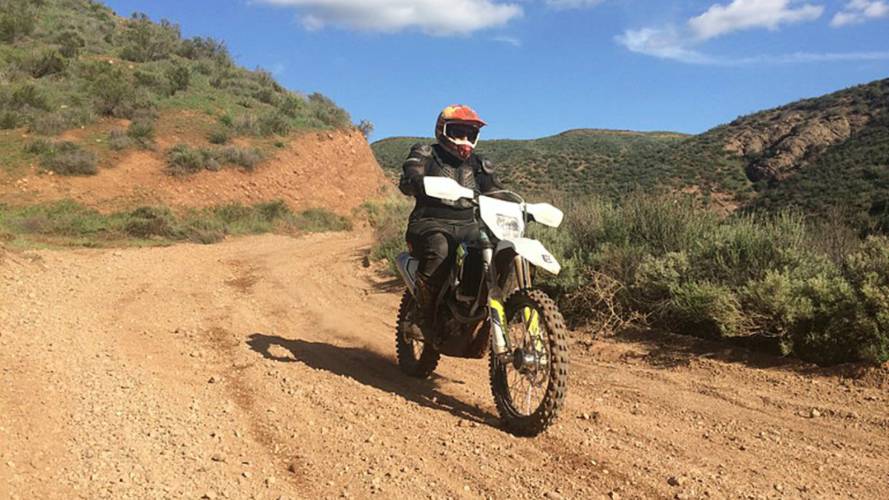 I typically don’t ride modern bikes, but it's not because I'm some kind of fuddy-duddy Luddite that wants to tell these kids what it was like back in my day. It's because I'm a cheap New England Yankee who is very much like the modern incarnation of Fred Mertz. I tend to stay off of modern bikes because I can’t afford the latest and greatest, and I don’t want to be tempted by finding out just how new and great they are.

That being said, RideApart inviting me out to play on bikes (like the new Husky) was like being given a hall pass by my wife to sleep around, so I couldn't say no.

After the disastrous nature of my last off-road outings on vintage machinery, we had both agreed to see other bikes. The Husqvarna FE 450 is like a 20-something Swedish athlete (who lives in Austria) that's attractive, sophisticated, strong and playful: the perfect mid-life crisis dirt bike. It has plenty of power everywhere, yet it is supremely manageable with no big surprise hit (except maybe if you were stupid enough to give it full throttle in first gear). I wouldn’t suggest it to a smaller, novice rider, but if you are 6’ tall and have ridden other motorcycles for years, you'll do just fine on this bike.

You can putt the Husky 450 around off-road at low RPMs and enjoy the way its premium chassis inspires confidence — until you get the courage to really open it up and see what it will do. The perfect powerband and top end pull means that, in a pinch, all you have to do is grab the throttle and the front wheel is over that rut, or rock, before you realize it. Botch a corner and lose your momentum? No problem, this bike has the power to make up for it and get it back to explode up the next hill or over a jump.

Speaking of which, I was actually a little disappointed by the lack of places to get air at Rowher Flats, though perhaps I should have known from the name? I mean, the place was certainly not flat, with mountains and ridges to explore, but little in the way of the natural terrain motocross courses I'm used to riding my vintage bikes on. We actually watched a group folks in 4 x 4 trucks —way up on the side of a hill all day — who had gotten stuck and were forced to fix the lead truck in order to get the rest down the path.

In my mind, the perfect bike is one that you hardly have to think about after the first few minutes riding it. It's a cliché to say the bike disappears beneath you, and the bike and rider become like a single unit, but that pretty much describes the way I feel when the bike feels right. This Husky is like that, and I’m sure a lot of Japanese off-road 450 bikes these days are the same way, but I haven’t ridden them. Between the sound and the power, I was reminded of the fictional Vincent Black Shadow factory race team that Hunter S. Thompson claimed to ride for at the Mint 400; it sounds awesome, and exotic, and it has power to spare everywhere, which may strike fear into those who aren’t ready for it.