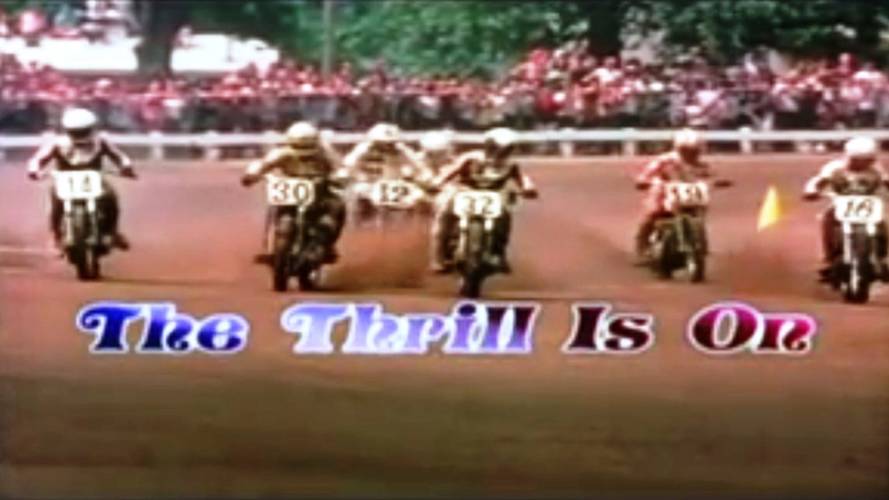 The Thrill Is On and Hell Riders: moto movies worth checking out!

I watched The Thrill is On (1971) and what I could find of Hell Riders (1984) thanks to the wonders of YouTube and their algorithmic profiling. One is a lost-for-30-years On Any Sunday (1970) knock off, and the other is your basic low budget biker movie. Both are obscure and you probably haven't seen them.

I actually haven't even been able to watch all of Hell Riders yet, because the internet gets it confused with the much better known Hell Ride from 2008, so it is hard to find. This movie was never officially released on DVD, and a used, out of print, VHS tape is listed for nearly $200 on Amazon! Why do I care, and why should you? Because it is a 1980s biker film with none other than Tina "Ginger from Gilligan's Island" Louise and Adam "Batman from Batman" West!

If anyone happens to find this streaming online anywhere, let me know. As it is I may have to buy a semi-legal copy on DVD from some fly by night online site that burns it on demand. Until then, all I can tell you is that it has very poor production values, doesn't seem to have much in the way of a script, and follows the typical "biker gang terrorize a small town" plot. Adam West, or his stunt double (who actually does most of the acting) has to save Tina and the day, not to mention the townsfolk. Just look how awesome the box art made him!

All I was able to watch were the 10 minutes of it that are up on YouTube, and you can too.

The Thrill Is On

Now on to the better, more respectable feature, The Thrill is On (1971). This move is similar in a lot of ways to what Bruce Brown did in his motorcycle documentary released a year earlier, and you might say it is just an attempt to cash in on it. Dave Despain basically says just that in the introduction. But there is no denying that motorcycle flat track racing in America in the late 1960s and early 1970s was a very interesting and exciting period, with American, European and Japanese bikes all pushing it faster and faster. The filmmakers— really just students with a 16mm (or maybe even an 8mm) camera —follow up-and-coming rider Dave Aldana around most of the season and do get some spectacular footage.

Watching this, which has a run time of just about 45 minutes, plus a tacked-on interview at the end with Dave and another legendary rider, Bart Markel, you realize just how talented Bruce Brown is. The guys behind The Thrill is On lack any of the humor and creativity that made Endless Summer more than just a vacation slide show, and On Any Sunday more than just Wide World of Sports reruns.

Fans of flat track racing really should check this out though, because this is back when you still had Harley, BSA, Triumph, Norton, Yamaha and a few other bikes all fighting for it, all over the country, on 1/4, 1/2, and full mile ovals several nights a week. A man with a van and a plan, as they used to say, could make a living as a privateer, even if he was only good enough to crack the top ten occasionally.

Rotten Tomato Rating: Hell Riders - None. Thrill is On - None

RideApart Worth Watching: Hell Riders - Probably, but probably not worth the effort. Thrill is On - Yes, but only if you like flat track racing

Redeeming Quality: Hell Riders - Random gratuitous nudity and violence. Thrill is On - So many racing legends as the AMA transitioned from the Grand National interdisciplinary championship to the more specialized road race, TT, flat track individual championships. You'll see Dick Mann, Gene Romero, Kenny Roberts, and more all racing in the dirt, on dusty ovals with no safety provisions. This is back when racing killed and seriously injured top riders on a weekly basis.

Things to watch for:

If you are ready to see how it was done back in the day, just click here, or press play below: