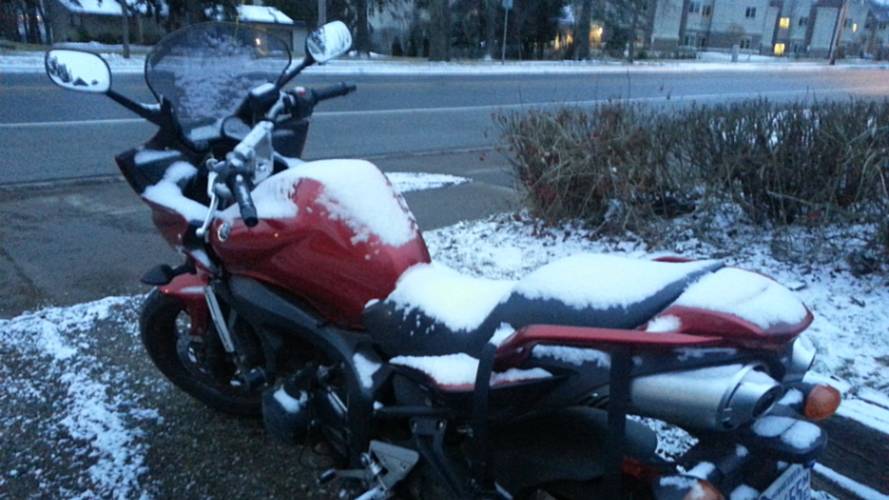 Slush, a winter storm, and a weekend trip for the Zero Below Zero crew.

March — In like a lamb, out like a lion. Or is it the other way around? Here in Duluth, it's a big cat that shows up whenever it pleases.

There is a winter storm warning, with 12-18" expected. But the severe weather they predicted is not the severe weather we got. Next to the big Lake, all we got was rain, and a lot of it. Part of I-35 was closed due to flooding and the plows were out plowing water!

Thursday morning the Zero and everything else was covered with ice and wet, heavy snow. Roads looked to be in decent shape, though. I'm sure they only "looked OK" because I had already ridden through worse this winter.

A little hiccup this morning, the Zero wouldn't go. After emailing our contacts at Zero, we narrowed it down to a few possibilities. As a web developer and IT person I have found that 9 times out of 10 the problem can be found between the keyboard and chair, i.e., user error (also known as an EYE-DEE-TEN-TEE). That seemed to be the case here. The motorcycle key needs to be turned on before switching on our auxiliary circuit for the warm grips and electrics. I had probably done it backwards.

Embarrassed to not be riding today, I went home at lunch and retrieved the bike. With the proper sequence:

I had been running around a bit so I was feeling pretty warm, especially after getting geared up indoors, so I decided to leave the auxiliary electrics off. At highway speed it definitely made a difference. The ride was chilly, but not intolerable. I had also left my warmbib off. That was probably a mistake...I think that extra layer of Windstopper fabric would have made a big difference, even if I didn't plug it in.

While trouble shooting with the folks at Zero, Bill asked me if I had a smartphone and had I downloaded the app? What? There's an app? I told my fellow riders, Kyle and Randy, about the app. "Whoa, there's an app?" Soon all 3 of us had it downloaded and were geeking out over this new shiny thing. The app connects the Zero to your smartphone via bluetooth and includes screens to monitor battery charge status, time to complete charge, trip stats, and more. It also allows you to download the bike and battery data and email them to Zero service. Cool!

Ride home and I'm back in the groove. Sometimes the March Lion is just a big pussy cat. The roads are already clear and mostly dry. The trees lining London Rd are gorgeous; limned in white snow against the steel-grey sky. I sure wish I had the video set up that Kyle and Randy have.

Friday going home, the wind off the lake feels heavy and cold as it hits me hard in the chest. The Lion is back. Saturday is a bright sunny day, another Lamb. The power is out as I roll into downtown and traffic is minimal. The stillness is a little eerie.

Stopping for lunch with some friends, I ran into a rather odd problem. The kickstand on the Zero is rather long; and my legs are rather short. Under most circumstances I can manage OK, though I do agree with Andy that a lower seat would be nice--especially on this day. I parked the Zero in a lot where the pavement was falling away to my right. I soon found that I couldn't lean the bike far enough to the right (and still hold it up) to be able to swing the kickstand into place. After a minute or 2 of trying with no success, I tested the limits of my hip flexibility and managed to swing my leg over the seat to get off and put the kickstand down. In retrospect I should have just moved to another spot because I had an even harder time leaving. In the future I will be sure to park on level ground or sloping down to the left.

Saturday evening we were going to go 16 miles up the shore to Knife River to house sit for friends. With 4 dogs, 1 child, 1 adult and a couple overnight bags packed into the car, there was no room for me. Time for a ride! Scenic Hwy 61 follows right along the edge of Lake Superior, sometimes coming within mere feet of the shore. It is a fantastic ride; peaceful, quiet and dark. I often ride my bicycle up this route in the Summer. The Zero is just as quiet, but much less effort than pedaling!

Sunday morning and the Lion tries to make another appearance. It is bright and clear, but the temperature has dropped back into the teens and a little more snow has dropped. After all the rain turning to ice turning to snow earlier in the week, some water must have gotten into the key cylinder and frozen. Unlike Kyle, I was able to find my little can of de-icer before August. However, all the propellant had leaked out and it might as well have been empty. Scrounging in my friends garage turned up some WD-40, but it didn't seem to help much. After 20 minutes of cupping my hands around the cylinder to warm it up and much heavy breathing (into the cylinder) the key finally went in and turned!

I decided to take the expressway home. I wondered what 65 miles per hour in this cold would mean for the batteries. The Zero had no trouble getting up to speed, but after a while I was watching the battery charge indicator ticking down uncomfortably fast. There is a small rise in the road just before coming into Duluth and the batteries were showing 38% charge when I noticed the bike was slowing down. I twisted the throttle, but there was no extra power to give. Then as the speed limit changed to 40mph, then 30, there were no further issues with power. Perhaps the top end is limited when the batteries are low?

Monday morning is another Lamb. I found my bottle of Boeshield in the garage and put a few drops in the key cylinder. Ahhh...no more trouble with the key. After getting on the highway I am in the left lane (because there is an on ramp coming up) and I am starting to overtake a big lifted 4x4 truck. I see his brake lights flash as he comes up on slower traffic and I have a feeling he is going to move. I slow down a bit and sure enough the truck moves left, right in front of me. Again, I have to agree with Andy; a bright, retina-searing headlight may have helped in this situation. Thank goodness I was on top of my game, mainly due to riding through the Winter.

Last night I gave the keys to Randy and am now back on my bike. Sometime in the wee hours this morning the Lion made another appearance and there is an inch or so of new snow. I tucked my Warmbib under my hooded sweatshirt (it is warmer due to the added pressure and being closer to my body), donned my lightweight Roadcrafter and headed out of the garage. When I got to work, I realized I hadn't plugged in. As I predicted earlier, even unplugged the extra layer of WindStopper fabric made a difference (along with the small fairing on my Yamaha).

Riding both bikes back-to-back like this, it is easy to see the contrasts. The need to use clutch and shift levers vs. continuous gearing. The sound and feel of the chain (I should probably get that lubed) and motor roaring vs. the whisper of the electric motor and belt drive. A Lion and a Lamb. Or maybe a Lion in Lamb's clothing.