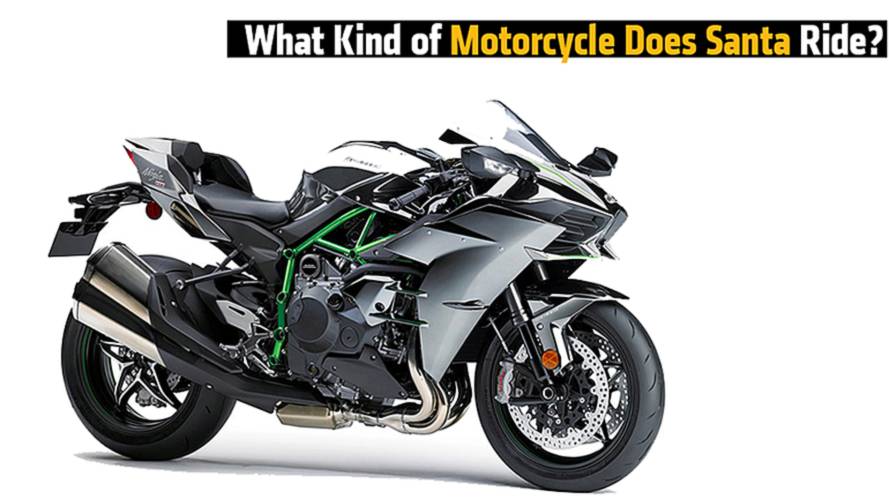 We ask, if Santa rode, what did he ride?

Happy Holidays to you and yours. In celebration of the holiday season, the staff decided to ask: if Santa rode, what would he ride? Here are some of our guesses.

Only as a temporary replacement for the reindeer, would be the Guinness Book of World Records’ largest motorcycle.

Built by Fabio Reggiani in Italy, this motorcycle is a record-breaking 16.7 ft. (5.1 meters) high and weighs 11,023 lbs. (5000 kilograms). The motorcycle is rideable and completed a 100-meter course at Montecchio Emilia, Italy.

The motorcycle is currently housed in an undisclosed location, but it’s the motorcycle that Santa would use if he could. - Joel Patel

As a little kid, I remember being in many Christmas plays. My classmates and I would sing all of the classic Christmas carols but the one I remember the most was "Silent Night". The perfect theme song for Santa Claus, I thought. Santa should never be heard and what would be the best way to deliver presents in typical stealth fashion using none other than an electric motorcycle.

While not completely silent, A Brammo Empulse R is relatively silent in comparison to, other, gas-powered bikes. The only downside is range, as many electric bikes offer well under 200 miles per charge with a complete "fill up" taking hours. No matter, this is Santa we're talking about, he'll make it work. - Titus Coleman

While the sport rider in me gets a kick out of picturing the Jolly Old Elf dragging a knee across a rumble-stripped apex on a sexy, red Panigale, I think St Nick is more likely to look elsewhere for his two-wheeled sleigh.

There are no motorcycle factories in the North Pole, and one would imagine that his elves are rather busy making millions off iPads and Cards Against Humanity decks to cobble together a custom ride for The Boss. So he's left with the rest of us, choosing from the embarrassment of riches that is the 2015 product lineup from the world's motorcycle manufacturers. He wants something with style, comfort, and classic lines. He wants the visceral pleasure of big torque and big sound. He wants the utility of big bags to haul all those presents, and a big plush seat to handle his considerable heft. Sense a theme? Santa Claus rides an Indian Chieftain. In red, of course. - Pete Hitzeman

Santa Claus is based on a character popular in the Netherlands and Belgium called Sinterklaas. A stately and elderly gentleman with long white hair, a full beard, and wearing a bishop's hat in red.

With European origins, Santa Claus would undoubtedly ride a BMW. Being a somewhat unique elderly fellow he would most certainly choose a K1300S as his mount. He does use a reindeer with a glowing nose after all to pull his sleigh. The K1300S packs plenty of speed to reach all of the little children to drop off their toys, it's comfortable for those long rides, particularly with BMW's heated accessories, and just grown up enough to satisfy Mrs. Claus. A gentleman's conveyance for the greatest giver of all time. - William Connor

If Santa were feeling a little sporty this holiday season, he’d have to carefully weigh his options when selecting the proper sportbike to get the job done. Let’s break this important matter down:

In order to handle his notorious weight problem, a high-output powerplant would be strongly advised for Saint Nick, and one with a fat torque curve would be ideal to pull his jolly ass out of the snow. For this, a big-bore V-twin ought to play. This brings us to the realm of Ducati’s, EBR’s and KTM’s with the likes of the Panigale 1299, 1190 RX and RC8-R. However, Santa would be better suited with a sportbike that is both modern yet has stood the test of time and perhaps, one that is slightly less obvious. This narrows us down to the legendary Suzuki TL1000R and Honda RC51 (RVT1000R). Both are awesome bikes that we wish were still in production and models that cause us to stare when a mint specimen thunders down the street. Back in the day, these bikes were torque monsters harnessed in compact sportbike chassis resulting in chest-pounding, knuckle-whitening, wheelie-rocking machines and these byproducts still prove true today. The RC51 even won the World Superbike title in 2000 with Colin Edwards on board as well as the AMA Superbike series in 2002 with Nicky Hayden in the pilot’s seat knocking Ducati off of its comfortable seat on the throne. However, the deciding factor between the two classic twins here is the SRAD-style tail sported by the TL1000R. We have to assume ol’ Kris Kringle could cram a serious amount of gifts (or coal loads) under that hump for any last-minute deliveries.

For all of this, the Suzuki TL1000R is the only sportbike truly fit for Saint Nick. - Bruce Speedman

Santa rides a Harley. We all know that. And not just a Harley — Santa rides an Electra Glide Ultra Limited. Not the CVO, either. Just a stock Vivid Black Ultra Limited. This year, Santa was torn. He almost chose an Indian Roadmaster, but he realized that the Project Rushmore improvements, along with onboard GPS, made the Harley the right choice for at least one more year. - Jason Fogelson

Santa would ride a Ninja H2R! He needs to get around the world in one night, so he’s going to need plenty of speed, and there’s nothing faster than an H2R!
Admittedly, the open exhaust on the circuit-only bike might wake some children. The slick tires and lack of headlight might also present a few problems, but we’re assuming Santa is an experienced rider. If Santa is looking for something street legal, he could always opt for the supercharged Ninja H2 with its headlights, treaded tires and full street exhaust.
Or perhaps the standard hard saddlebags and comfy seat on the 2015 Kawasaki Concours 14 ABS might be more to his liking. Then again, the 2015 Kawasaki Versys 1000 LT also comes with standard hard saddlebags, long travel suspension and an accommodating seat. It might be more suitable for those hard-to-reach places.
And let’s now forget the supercharged Kawasaki Jet Ski Ultra 310LX with its standard sound system and plenty of storage for remote island deliveries.
And the Kawasaki MULE PRO-FXT side x side with its large cargo bed, flexible Trans Cab seating to accommodate up to six elves, as well as selectable AWD and locking diff. It will be able to tackle the difficult terrain during his circumnavigation. - Greg Emmerson

Offers Utility, durability, dependability - with a great warranty deal for Santa through BMW's mythical creature, fairy tale and super hero sales program. Santa gets a new one every spring and a crew of factory trained elves to handle routine maintenance. It doesn't fly or have antlers but gets the job done around camp Santa at the North Pole- only available in Candy Cane Red (not shown). - Justin Mendelhall
READ MORE: Why Wearing Jeans On A Motorcycle Is A Really Bad Idea ...