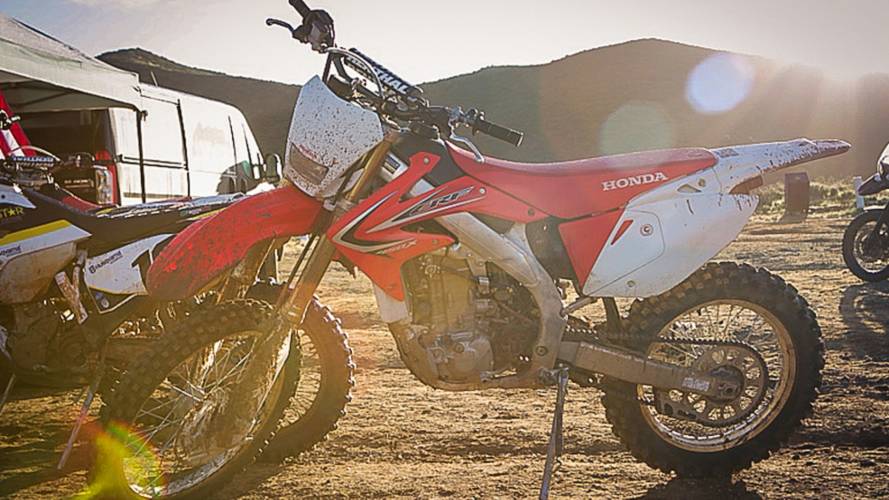 The Honda CR450X: A story of continuing improvement with each new edition.

Last weekend I was invited by my friend Jim from RideApart to "Family Dirt Day," where I was asked to ride, and ultimately write a few words on several new dual sport motorcycles. I know Jim from riding big adventure bikes, so I was stoked and honored that he'd ask me to do this.

All I knew about the event was that there would be a number of new bikes from various manufacturers and of varying displacements— from child to wild. When I showed up at Rowher Flats OHV riding area, Jim asked that I ride the 450 class big boys: the Yamaha WR450, the Honda CRF450X, and the sexy Husqvarna FE450, which I was very excited to ride for the first time. I had also brought my seven year-old daughter and five year-old son along with their riding gear in the hopes that they could get some seat time on the smaller bikes.

After the ride briefing, my daughter asked me which bike I was going to ride first. I told her that all I wanted was to ride the Husqvarna last. My reasoning was that I wanted to experience it for the first time only after reintroducing myself to the Japanese offerings that I was familiar with from previous years. For my own curiosity (and to keep things consistent), I repeated the same trail loop on all three bikes.

The trail loop had a one-way single track, with loads of sweeping switch-backs and blind turns over rises, jumps, steep hills, spots of sand, hard-pack, rocks, and even mud in some areas from the previous night's downpour. The exit portion of this loop consisted of a steep, rocky, technical —yet fast — downhill that let me test braking, suspension, and front end feel. Riding conditions were perfect.

As the cards played out, the Husqvarna was made available to me first — there goes my idea about riding it last! Anyway, I hopped on the Husky and took off.

The first thing I noticed is that this thing has a lot of torque. It hauls the mail and puts down the power in a way that maximizes hookup. I was very impressed with its ability to go. On the long uphill, with loads of traction, the motor pulled hard — even in the lower RPM range. It inspired confidence in the hill climbs with its enormous power band.

Going down hill, however, my initial feeling was of some vagueness introduced from the front end, which was only exacerbated and confirmed by hard braking once I got to a level ground. What's more, I felt that the bike was just...heavy. This is strange because it was listed as the lightest 450s available, but it just felt heavy with a sluggish turn in. Perhaps ergonomics were a factor, or maybe it just doesn't agree with my riding style, but I was left disappointed with the Husky, which is a pity because I really wanted to like that bike.

The Yamaha WR450 was next. Tall and narrow, it feels fast just sitting on it, and it is. Twist the throttle just a bit and the power comes on hard and fast. Where the Husky delivered its power over a wide rev range, the Yamaha's motor spins up and delivers its power more reminiscent of a 2-stroke! It must be ridden with commitment and will reward the rider that does this. But like a 2-stroke, it did require more shifting and clutch work to keep the RPMs in the right place at times — an attribute that manifested as forearm fatigue, especially going uphill.

The bike is so flickable and nimble, you can charge into corners on the front wheel, push the bike down with haste, and power out with a flick of the wrist. Again, this bike rewards commitment. The suspension is tall and taut, and it inspired confidence everywhere. The brakes have a great bite and scrubbed speed just as fast as the Yamaha could make it. The downhill section confirmed that the WR's suspension and brakes work well together while maintaining sensitivity. Look at the WR as a legit motocross bike with an instrument cluster and a small light: very sharp, very focused.

Next, it was time for me to ride the venerable Honda 450X. I owned a 2006 450X and primarily rode trails on it before I began riding the big ADV bikes, but that was over 10 years ago. Sitting on it was like shaking hands with an old friend. I fueled up the bike from the last rider and took off past the now familiar trailhead.

The balance of the Honda was instantly noticeable. The Honda's motor has a linear feel that tracts power comfortably when desired, but can spin up quickly when the pace gets more intense. The motor/gearing combination made it to where you could enter corners at speed, turn, power hard out, and arrive at the next corner without shifting or clutching; surely a trait that will be appreciated after a long day of riding. The suspension was more plush and compliant than the Yamaha's, but more sensitive than the Husky's.

The bike turns in a predictable and linear way— not too fast and not too sluggish. The downhill section was the most controlled on the Honda, with its suspension soaking up the large rocks while the sensitive brakes allowed me to hug a very narrow line on the heavily cambered shoulder. Honda continue to do a great job in making subtle, almost imperceptible improvements to the 450X that make it a great dual sport bike. And after some thought, it's fitting that I rode this bike last...