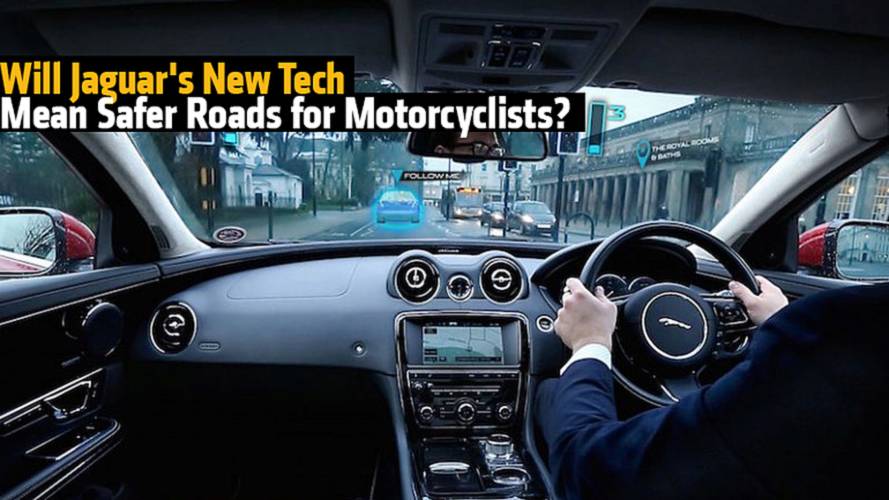 Jaguar and Volvo unveil new safety systems to protect motorcyclists and other road users from cagers.

Earlier this year, Jaguar unveiled its plans to reinvent the windshield. We wondered how that would translate into day to day use as it mostly discussed ghost cars on the race track and virtual braking points. This might be great for a video game, but it's not too helpful in Monday traffic.

You may remember this video we posted last year. We can only guess the driver didn't see the motorcycle due to it's pillar creating a blind spot.

This latest announcement seems a far more useful, a screen embedded into the pillars in the car, all of which typically provide a nasty blind spot. When activated, those screens will turn the pillars into live video by displaying the footage from a video camera. The A, B and C pillars will appear as if they're no longer there, allowing drivers 360 degrees of unobstructed vision. This is only activated when the driver turns their head. They will track head movement and activate when you turn to check behind you or when an obstacle is approaching. A driver would get this info only it's needed, retuning to normal pillars when it's not. Other than screen life or camera life, we don't see the reason to add this level of complexity. Possible delays in activation and ensuing issues with fidgety drivers might make this feature even more of a distraction.

The heads-up display boasts a "follow me" ghost car navigation system. The theory is that it's easier to follow an actual car on the road rather than a small colored line on a navigation screen. So, like in a video game, a ghost car appears in the HUD, and the driver simply follows where it goes. When a traffic light turns red, the car disappears. I would almost prefer it to have brake lights and not just disappear.  Once moving again, the ghost car on the HUD returns to guide the driver.

READ MORE: Take a Motorcycle Tour in Cuba with a Revolutionary Leader’s Son

Watching the video of the system in action, the see-through pillars could be pretty amazing. Think of being able to completely see out of the rear window of a sports car, possibly even allowing the removal of windows all together? That's a bit scary.

The system does offer some safety especially when combined with the red halos that warn of moving hazards, like a pedestrian stepping out into the street. The ghost car may be more dangerous as you could easily target fixate and forget there are things like other cars you need to avoid.

No word on when this technology will head to production. Most likely it still needs some tweaks, a run through the legal team, and then the bean counters, and then back to legal.

Not to be outdone, Volvo has developed technology that alerts drivers to the presence of bicyclists and could also warn them of motorcyclists.

They use a smartphone app to monitor the rider's position in relation to their prototype car. When the two are at risk of collision, the driver is warned through a HUD and the rider by a light in his helmet. Unlike the Jaguar system though this requires modifications to each vehicle and more distracting lights. I wonder if anyone has thought of using less lights, less tech, and well more time watching the road!?!

A Volvo spokesman said the system could warn drivers of bikes they can't see and help tackle SMIDSY crashes, so called because drivers who cause them commonly say 'Sorry mate, I didn't see you.' Our biggest fear is that with all of this people will literally pay less attention depending on the system completely. It will also now be a built in excuse, instead of SMIDSY it will turn into, Sorry Mate My Car Didn't Tell Me.

Volvo did say it would be possible for the technology to warn drivers of motorcyclists as well as cyclists. ‘Right now the technology is only in its concept stage but I don’t think we would ever restrict it to just cyclists. We would look to where else it could help for other vulnerable road users,’ he said.

The concept is a result of an all Swedish partnership between Volvo, Ericsson and cycle helmet maker Poc.

Volvo plans to unveil the system at a technology trade show in Las Vegas.