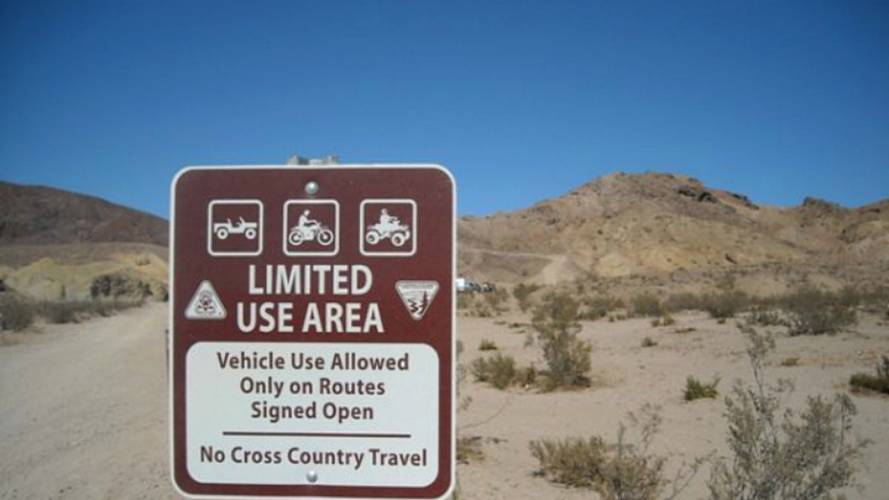 A Brief History of California's Off Highway laws

As you may have read in the pieces from the RideApart Family Dirt Day, we ran afoul with a park ranger while riding at the Rowher Flats State Park OHV area. Even with an actual representative from Honda, in a brightly painted official Honda truck, we could not convince her that the "green stickers" we had copies of belonged to the factory demo bikes we were riding. I'm not going to get into the gritty details of that, but it did get me digging into the details of the whole OHV registration system we have here in California (which is similar to Nevada and Arizona), so I figured I'd write a little pros and cons piece for people in other states to laugh at us, and those here in California to maybe be informed by.

You may ask, especially if you live outside of California: "If I'm riding off road, why do I need to have my bike registered? Aren't license plates just for street bikes?" And you would be right — off-road-only bikes just get a license sticker, no plate. The politics of the whole thing can get REALLY sticky, and absurd, and make you want to grab your bikes and guns and join a militia movement. In fact, the DMV even expects closed course competition bikes to have a transportation permit...to be transported to the track!

These "Transportation Permits" must be really popular, seeing as how the page doesn't exist

How We Got Here

Once upon a time, like way back in the 1970s, you could basically ride a motorcycle, or drive a dune buggy/ATV/Jeep/4x4, anywhere. Almost anywhere at least. The understood rules were that if there was no sign saying "Keep Out," "No Trespassing," "No Motorized Vehicles," or "White Sands Atomic Testing Site" you could ride without fear that you were breaking the law.

The vast deserts of the west were wide open, but like many things that used to be legal, you can blame the Baby Boomers for ruining this too. Riding motorcycles off road got so popular in the late 1960s that the deserts started to look like rush hour in Hong Kong, with 2-stroke bikes belching smoke, noise, and creating honest-to-goodness off-road traffic. At least that's how it all looked in the mind of some environmentalists of the day, and they started lobbying for something to be done about it. And now we have hit political sticking point #1, because we all like critters, clean air and water, and I don't want to argue about where the lines should be drawn for how many critters, and how clean of air or water.

And so, in order to try and keep everyone happy, and get the environmentalists out of their hair, the state established an off highway vehicle registration system. Obviously, you can't ticket and fine people unless you have a system to identify and punish them. There were benefits included for dirt bike riders so it wouldn't all be punitive. For one thing, dirt bikes would have a title and each VIN would be on file to help combat theft. Also, a trust fund was set up, paid into by these new green sticker registrations — as well as gas taxes — and used for off-road riding area improvements. This OHV fund became so flush that the state constantly "borrowed" money from it for other resources, while dragging their feet on opening new OHV parks and closing formerly open riding areas in the deserts and forests.

In 2012, there was a scandal involving whether there was a hidden $34 million surplus in the OHV account, or even more! Twenty years ago, the state was forced to pay back millions in OHV funds they had used for other purposes, and yet since 2005, the OHV fund has still loaned $150 million to the general fund. This is political sticking point #2 because this isn't meant to be a discussion of the effectiveness or trustworthiness of governments.

You have to tread lightly, literally, when riding off road, and figuratively when you start discussing these things. Otherwise, you risk coming off like a ranting, gun waving, anti-government extremist, who wants nothing more than to ride his dirt bike over as many desert tortoises and Indian burial mounds as possible, before going home to a tinfoil lined plywood shack.

The OHV fund has done some nice things, like add bathrooms, trail markings, and rangers looking out for your safety at the designated OHV parks like Rowher Flats. But since dirt bikers have gone from benignly neglected in the 1970s to actively managed now, something like 25 million acres of land have been put off limits to riders. And the "closing of the desert" is political sticking point #3 (or maybe 1b?), and I'll just mention that one of the areas closed for "environmental reasons" used to be a range for the military to practice with tanks and bombers using live explosives.

The fund pays for signs like this, which hurt just as much when you crash into them ironically

Don't get me wrong, I do appreciate that if I happen to get pinned between my bike and a big rock, chances are a ranger will find me before I have to cut my own arm off like James Franco. What has happened though, is that by forcing all of the off-road users into a smaller designated area, it has created a self fulfilling prophecy. The Sierra Club and their ilk can now point at Gorman or Rowher Flats and say, "Look! See how badly these people and their machines damage the environment!" Turns out that the concentrated riders cause concentrated damage. A thousand bikes riding over a million acres will barely leave a mark, but force them into an area 1/10 the size and suddenly you notice tire tracks everywhere.

And who is patrolling the "closed" desert anyway? Why claim to close thousands of square miles of desert when the government can't actual close the line in the sand at the border? The green sticker program also discourages new young riders, because tired old untitled minibikes (or home built pull start models) are easily within reach with wise allowance management, but they can't be ridden legally without mom or dad working out the paperwork (if at all).

Go kid, just point it at the horizon and don't look back or the ranger might get you

Why Should I Care

Now, most of you probably ride street bikes, and are going to be all, "why should I care?" And I'll tell you why: because this might happen to you too. Some enthusiasts back in the day (Super Hunky in Dirt Bike Magazine for one) predicted a lot of what came to pass, and folks dismissed it as extremist ranting. I remember one about how it really wasn't the environment that was motivating people, it was the thought that people were out having fun, with no supervision, no rules, and no way for the state to make a buck off of it. Now look where we are, with rules, and rangers, and the state borrowing money from the off-road fund practically every year. The Japanese motorcycle industry didn't want to rock the boat by opposing these new rules. The AMA, at the time, were more concerned with protecting Harley, and fighting the outlaw biker image, and are still fairly ineffective when it comes to land closures to this day.

Street bikes you say? Come on, get to the point. Okay. Street bikes in this country (the U.S.A.) are seen by many as nothing more than recreation; though they are a way of life and the best way to commute for many of us. With self driving cars coming online any day now, it's easy to imagine legislation to make things easier on the computers driving them.

The simplest thing to legislate might be street bike behavior, so as to keep lane splitting bikes from causing a robot car to swerve or brake. But that's going to be awfully hard to enforce, so how about closing high density, multilane freeways to motorcycle use all together in urban areas? Google, GM, Apple, and whoever else will be lobbying for progress in the form of autonomous cars. And who can stand up for the few million street riders out there in the face of their money and influence?

I feel now that I may have gotten off track a little bit here, so maybe I ought to just slap on my helmet and go out for a ride to clear my head.