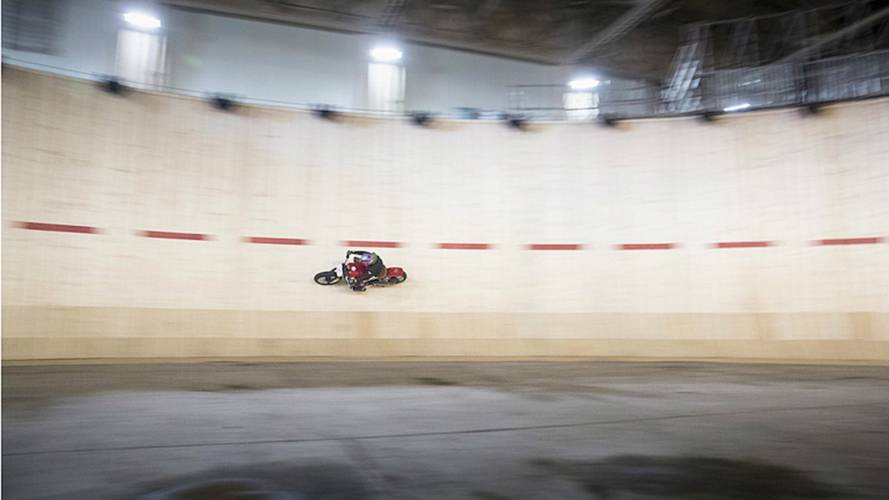 Motorcycling legend Guy Martin has set a Wall of Death speed record, hitting 78.15 mph and sustaining more than 5 G in the process.

Martin, 34, actually broke the record twice during an event that was broadcast live on British television this week. Riding on a specially designed wall several times larger than those normally used, he first set a record of 70.33 mph riding a customized modern Indian Scout. The bike was built by Krazy Horse– one of the UK's top custom shops.

Later in the same program, Martin broke his own record using a bike he had built himself. That bike incorporated a BSA frame and unnamed 750cc three-cylinder engine.

The Wall of Death is an old fairground attraction dating back to the early 1900s, which has seen a resurgence in popularity in recent years. It involves motorcycle performers moving at enough speed for their bikes to "stick" to the walls of a large wooden silo.

In most cases, a Wall of Death is roughly 30 feet in diameter, allowing a rider to build up enough gravitational force to "stick" to a wall at relatively low speed (usually 20-25 mph). Had Martin attempted his speed attempt on such a wall, however, the excessive G force he would have experienced as a result likely would have caused him to pass out.

A larger wall– in this case, 40 meters in diameter –allowed for greater speed with slightly less force being exerted on Martin's body. Typically, 5 G is the most a person can sustain before losing consciousness.

In the UK, the most famous Wall of Death show is operated by the Ken Fox Troupe, who helped train Martin for this week's record attempt. RideApart got a chance to see the Ken Fox Troupe perform at Dirt Quake IV last summer and Martin was in attendance, taking a VIP seat at the center of the ring.

Calling Martin's speed record a "bold, ambitious, and unreasonable thing to attempt," British broadcaster Channel 4 aired the Wall of Death rides in a two-hour primetime event. The Isle of Man TT racer is wildly popular in the UK and has helped to raise the profile of motorcycling as a result.

His Wall of Death attempt is one of a series of oddball stunts Martin will be undertaking for TV over the coming months. Later this year he hopes to set a new record by driving 200 mph in a transit van, then he'll attempt to cross the English Channel via a pedal-powered blimp.

Last year, Martin was featured in a program ("Our Guy in India") that saw him riding a Royal Enfield across India. He has spoken of plans to return and ride that same bike through the Himalayas.

Check out Martin's record-setting ride below: