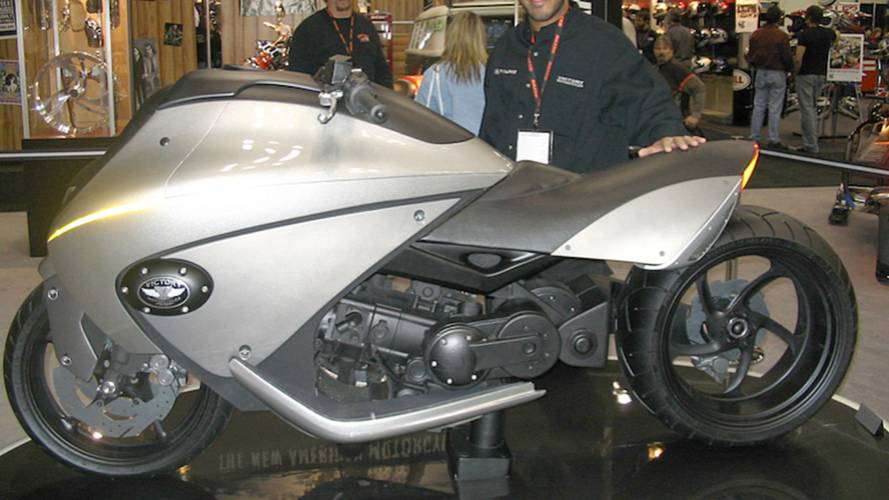 Victory's NM-4: Remembering the Vision 800A little over 10 years ago, Victory Motorcycles revealed a concept bike that featured an 800cc...

A little over 10 years ago, Victory Motorcycles revealed a concept bike that featured an 800cc liquid-cooled parallel twin engine, automatic transmission, and storage in the space where a tank would traditionally be. Dubbed the Vision 800, it was a dramatic departure from the sort of thing Americans had come to expect from their motorcycle manufacturers, and it offered a glimpse of Victory's true potential.

If you've never heard of the Vision 800, you're not alone. I only learned about it last year, as I was doing research for my review of the much larger V-twin tourer that shares part of the Vision 800's name, as well as its futuristic look. To my eye, Victory had created the Honda NM-4 several years before Honda, and I was surprised such a unique concept could seemingly have come and gone without more fanfare.

When Victory released its new liquid-cooled Octane model this year, one of the narratives of the bike was that it represented a kind of opening of the doors for the Minnesota-based company. Finally, with its Polaris sibling, Indian, shoring up the traditional/heritage side of motorcycling, Victory could begin pushing in new directions.

All of which got me thinking again about the Vision 800. I decided to get in touch with the folks at Victory to ask a little more about the bike, starting with the most obvious question: Why wasn't there a production version?

"The Vision 800 was designed to be a concept motorcycle and introduce design elements that eventually showed up in the Victory Vision," explained Victory/Indian External Relations Manager Robert Pandya. "It was not intended to be a production bike, then 'backed off' from production. The point of concept bikes is to introduce a series of design ideas and explore the product possibilities for the brand."

For more information about the Vision 800, Pandya directed me to Tiger Bracy, the designer behind the project.

"The history of the Vision 800 began with my summer '04 internship," he said. "I was a Transportation Design student at the Art Center College of Design, in Pasadena, California. My boss (Greg Brew) handed me a design brief to work on something rather unique. We had a few conversations surrounding what an automatic motorcycle might be like for Victory. It needed to utilize a motor from our existing portfolio, and it needed to tie in with the Victory Vision touring bike."

The motor Bracy used was from a Polaris Sportsman 800 ATV. Equipped with a cast aluminum alloy frame, linked brakes and low-seat cruiser ergonomics, the Vision 800 was aimed at expanding Victory's customer base beyond its current buyer.

"I decided to... aim it towards new riders with very little or no experience," Bracy told me. "It was a statement on how a new motorcycle brand could develop its customers from the ground up. Notice I say motorcycle brand and not 'cruiser' brand. I wanted to challenge the status quo of what the 'New American Motorcycle' could become in the future."

Designer Tiger Bracy sits on the Vision 800 concept, which is now displayed in his office.

To do this, Bracy spent a long time thinking about the sort of person that would ride the Vision 800 — someone he hoped could grow with the brand after choosing his concept as their first bike.

"Most inexperienced riders aspire to have a more powerful bike right away, even though they lack the riding skill to safely ride it," he said. "There is nothing intuitive about riding a traditional motorcycle when you’re a beginner. They’re dangerous and difficult to master. In an absurd way, I guess that’s a part of the appeal.

"So, the styling of the Vision 800 needed to say American Muscle, and, most importantly, it needed to be unique. Think trendsetter, not a follower."

For the styling, Bracy said he couldn't help but look to the Vision tourer.

"The Vision touring bike was in the beginning stages of development," he explained. "I had this prototype sitting right in my face every day. The Vision 800 was designed to flaunt the new look of the Vision touring bike, but they could not share any actual components. I decided to borrow the touring bike's architecture of having twin fuel tanks mounted on either side of the motor, and that’s it.

"I rotated the parallel twin cylinders toward the front wheel to give more room on top of the motor. The radiator was moved out in front of the forks so the motor itself could be pushed even further forward to give room for the CVT. That architecture aided the Vision 800 to open up a massive storage space where the fuel tank and air-box would normally reside."

Bracy isn't exaggerating when he says "massive." The Vision 800's "trunk" was large enough to hold two full-face helmets, plus a little more. Bracy felt that having that much storage would help encourage new riders.

"When you’re a newbie, what’s the best way to get more experience? Simple: more seat time,” he said. "You could use the 800 as a daily commuter. It could haul a bag of groceries and your gym bag, no problem... The low seat height would make the bike less intimidating for smaller people or the less experienced."

In dsicussing his desire to create a bike to draw in new riders, Bracy offered a lot of insight into the challenges that any motorcycle manufacturer faces, especially in the modern world.

"Grandpa is getting old, but he’s living longer than his parents did," Bracy said. " his great-grandchildren may not have any interest in the bikes he once enjoyed. If you want to sell more new bikes, then you probably need to find new riders. You want more riders, you’ve got to teach new people how to ride. In high school, I had a driver’s automotive education class at 15 years old. But what about early motorcycle education? Good luck with a two-day safety foundation course."

Bracy said that when he designed the Vision 800 he gave it an automatic transmission in hopes of partially answering those challenges. He said it makes a bike easier to ride, and therefore more "newbie" friendly.

He's not the only one to think this. Again, the comparison to the Honda NM-4 comes to mind. And, indeed, Honda has been at the forefront of pushing automatic transmission bikes.

The Vision 800 drew a fair amount of press attention, being featured in more than 20 magazines.

"Since the Vision 800, we’ve seen Honda’s DCT in many different models. This confirmed that I wasn’t alone in identifying a new segment that most manufacturers overlook," Bracy said. "You see attempts to make an automatic motorcycle look either like a traditional bike, sans the clutch lever, or like something out of Transformers. This to me is the dilemma. It’s very difficult to get rid of the manual clutch; it’s like a badge of honor. It’s proof that you earned your stripes."

But, Bracy said, that "badge of honor" may be something older generations are more concerned with than those who might be considering riding now.

"Future generations will grow up in a world where these new autonomous cars are common to them. Didn’t I just see a robot piloted a Yamaha R1 last year? I bet the phrase 'what the hell happened to the clutch lever' will seem old soon," he said. "Do I see a future for more automatic bikes in our lives? The answer is yes... That future will probably be dictated by the OEM that is smart enough to begin appealing to a much younger generation that may not see a benefit in a manual clutch."

Which leads to the obvious question of whether Victory will be that OEM. The official answer to the question is the company-wide response of, "We cannot speak to future product," but Robert Pandya did say that Victory— and to a broader extent, Polaris —is aware of the opportunity to head in a more unique directions.

"The possibilities for the brand are very wide indeed. Even moreso now than they were when the Vision 800 came out. Polaris brands have access to a wide array of engines and technologies, and would be able to build anything. But the real question is if customers will buy it," he said.

The bottom line has long been a guiding factor in Victory's decision-making process. The brand's prudish business sense has sometimes earned it criticism from those who would like to see more earth-shattering projects being put forward. But you have to admit that there's something to be said for a brand that isn't constantly hovering near bankruptcy.

And that's not to say that Victory is dedicated to being stuck in its ways.

"As consumer demands change, there are few companies in a better position to leverage a variety of technologies and product design groups than can build whatever we design," Pandya said. "It’s an exciting time to be in the PowerSports industry — especially with the Victory brand."

Meanwhile, Bracy remains hard at work within the Polaris umbrella. Since the Vision 800, he's worked on several of Polaris' off-road and on-road vehicle programs. Most notably, he was responsible for the three-wheeled Slingshot.

Looking back on the Vision 800, Bracy said he remains proud of the concept— which these days sits in his office —and feels Victory was particularly brave for putting it out there.

A "rip-off and butchering" of the Vision 800 was featured in the 2012 film 'Dredd.' Bracy wasn't sure whether to be flattered or angry.

"It let us know that anything was possible and we weren’t going to get stuck in one segment, just building clone bikes," he said.

And contrary to my limited perception (the internet gives us all a short memory), the Vision 800 did make a fairly big splash at the time.

"It was featured in more than 20 magazines, and Puma used it in an international ad campaign," Bracy said. "Some random design studio did a total rip-off and butchering of the concept for the latest Judge Dredd film. A friend of mine reminded me that imitation is the best form of flattery. I chuckled and grinned because I didn’t know if I should be flattered or pissed."