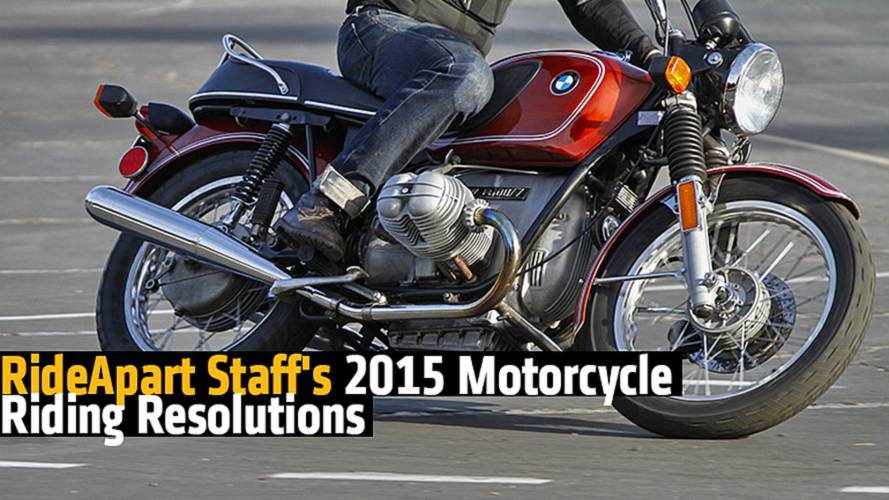 It's New Year's, and the RideApart staff has some motorcycle riding resolutions.

New Year's resolutions: easy to make, even easier to break - especially for riders with lofty goals. (Looking at you, Guy Who Just Watched Long Way Around And Is Now Making Plans To Circumnavigate The World On His TU250X). In the spirit of the holiday, we asked the staff to list their hopes, goals and what they wish to accomplish in 2015. At least here, it'll be in print reminding them come July.

Spend more time on dirt, go camping more, and spending less time worrying about stuff I cannot change. This has been a transitional year and I hope to keep that momentum going while settling into a better lifestyle. Balance priorities and have more fun. I also want to spend more time riding more motorcycles and hopefully doing more motorcycle tests. - William Connor

As RideApart's resident accidental biker - I stumbled into motorcycling after taking a job in 2013 working as a content writer for a large American manufacturer of cruiser bikes - I'm often painfully aware of my Noob status.

Author Robert Heinlein once said that "specialization is for insects". So for 2015, my resolution is to ride anything and everything I can get my hands on - naked, cruisers, sport bikes, ADV, and straight-up dirt bikes. Maybe along the way I'll figure out what my preference is, maybe not, but I look forward to sharing the experiences with RideApart's readers.

Too Many Bikes, Too Little Time

I have a few goals for 2015. I want to get a new bike. I've spent three years riding a Ninja 250, and next year I'll be converting the bike to strictly track use. I am hoping to move up to a Triumph Street Triple and do some exploring with my new toy.

I want to finish my project bike. It's a long story, but a year and a half ago I blew up my 1970 Honda CB175's engine. I am hellbent on finally finishing the rebuild and to take a road trip on the little bike that can. We'll see if I can make it happen, having multiple motorcycles keeps me very busy. I want to explore far away places.

My boyfriend and I have been saving pennies this year to buy tickets to Italy. We are looking to rent motorcycles and ride the Amalfi Coast. We will of course explore the sites and tour the food as well. It should be a life changing experience, and it's an adventure I can't wait to share with my best friend.

Finally, I want to write about all these adventures and more for RideApart. I would like to share the triumphs and tribulations of these experiences, as well as provide more content about the benefits of education and good gear. I have a feeling 2015 is going to be one of the best years yet! - Jen Tekawitha

Taking advantage of a fresh riding season requires a fine-tuned portfolio of riding techniques, a package that is never completely perfected.

In 2015, I would like to continue to dial in my technical riding abilities. For this, continued track time is a must but having a focused approach with specific skills and targeted techniques is the most effective plan of attack. Among other areas, I would really like to focus on improving corner entry performance. More specifically, working on harder late-braking and deeper turn-in points with quick execution will be targeted.

Waiting longer to shut the throttle and apply the brakes can be a bit of a mind game as you fight your instincts, but doing so forces execution in one quick, seamless and precise action. Throwing the bike over into the corner at a point on the track deeper in the turn allows the bike to be upright longer for more effective braking as well as enables me to hit a later apex.

These maneuvers really put braking, suspension and chassis components to the test and allow minor imperfections of a bike or setup to surface. Additionally, entering a corner at an elevated pace makes improving mid-corner speed easier as well as elicits a better drive out of the turn. Improving trail braking performance has produced similar benefits in the past, but scrubbing less speed before the corner begins then quickly flicking the bike over later will set up an even more advantageous riding line through the turn.

While working on riding techniques is an on-going process that will always make our new year’s resolution list, I am also especially excited about some of the new hardware rolling out of the factories in 2015.

Vow this year to become a ‘rider’ again. Not just a rider, but a better rider. Find a group and start slow. It’s never too late to reclaim a part of yourself. - Ray Roske

It hasn't seen the race track just yet, but this is the bike Titus has been riding lately, the Kawasaki Ninja 300. Photos by Belinda Paine

I need to be more diligent with maintenance. I need to finally get full leathers and schedule a track day. - Titus Coleman

Company for My Sporty

First, same as every year, I resolve to become a better rider. I’ll take every opportunity to learn new skills, refine old ones and get rid of bad habits.

Next, finally stop shopping, and add a second bike to my garage. I don’t think I have it in me to let go of Manny, my 1993 H-D Sportster, but I feel the need to bring a more modern and capable sport touring machine in to keep him company.

My budget dictates that it’ll be a used bike, but which one? A Kawasaki Concours 14? An older BMW R 1150 RT? A Yamaha FJR1300? Or should I go dual sport, and find an old Kawasaki KLR 650, a Suzuki V-Strom or a Triumph Tiger? Do you see my problem? I’ve only got room (and money) for one more bike, and I can make a case for a whole garage full. - Jason Fogelson