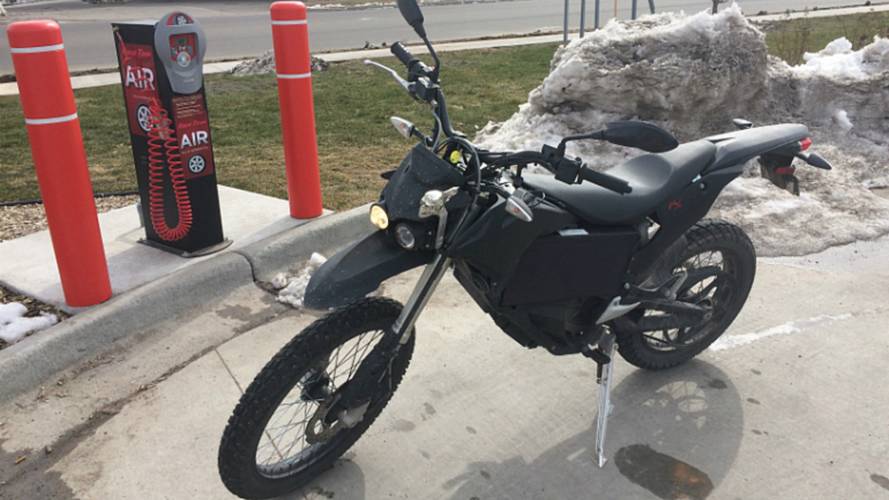 Zero Below Zero's Kyle takes advantage of the Zero FX's Sport Mode on a sunny (but very cold) Friday.

It’s 5pm and time to head for home. With the clocks springing forward last week, the sun is noticeably higher in the sky as I walk out to the Zero and unplug the charging cord. Throwing a leg over and turning the key displays that Randy has switched it from Eco mode (that we were riding with all Winter) to Sport mode. Starting the climb uphill and merging from the on-ramp into the traffic flow, it certainly feels like the Sport mode is more responsive as I twist throttle and quickly dart in front of and pull away from the surrounding traffic.

I see another Aerostich Roadcrafter clad rider coming toward me in the opposite lane. He is riding a BMW GS, and his Hi-Viz suit looks much cleaner than mine, which has acquired a Winter’s worth of added patina. As we pass in the flow of traffic we exchange the ‘rider wave’, and then with dinner waiting and some errands to run later this evening, I take the most direct route home.

The Friday morning weather is sunny, windy and 26ºF for the morning commute. Silently I roll the Zero up to the first stoplight just as it changed to red. I wait, all alone, on my side of the street, as a steady stream of vehicles passes by in front of me and the cars queue up at the light across the street. The signal changes to green for the turn lanes, and then allows the traffic from the other side to go straight, but my light does not change before the cross traffic once again gets the green. I hate it when lights don’t recognize a motorcycle sitting and waiting...

Just as I’m contemplating my timing for running through the red light if it once again doesn’t change, a lime-green Dodge Charger pulls up in the lane along side me. As the car comes to a stop, I clearly hear them rev the engine and a second later the light turns green. Already anxious from sitting thru a light cycle, and with a boost of adrenaline brought on by the roar of the muscle-car as it pulled up next to me, I grab throttle and am propelled through the intersection before the V8 Hemi even gets off the line. Yes, there seems to be some extra pep to this Sport mode.

Quickly up to speed, the added force of the wind pushing back against me is really noticeable today. It’s amazing how much wind gets blocked by even the small fairing on my gas-powered Versys, compared to the un-faired Zero FX. Looking down at the speedo, I realize that the push-back from the wind is mostly self-induced, so rolling off the throttle a bit makes it much less noticeable...

Approaching a few cars ahead of me in the traffic stream, the left lane is moving slower, so I merge to the right lane and begin to pass what looks to a a driver in a brand new car (still has the dealer name where the license plates go and the temporary tags taped in the rear window). As I pull along side, the new car begins to drift into my lane and a quick glare to the right confirms what was immediately suspected...the driver was too busy texting to watch where she was driving. Maybe she thought this was one of those new self driving cars...again the Sport mode was appreciated to apply a burst of speed to create a nearly immediate buffer space between me and this un-guided cruise missile.

Not sure if it was more noticeable because the travel speed was a little faster today, or if it was because the weather is slightly warmer and the roads are dry, but pulling into the factory I also make a mental note that the overall ride felt a little soft this morning. We intentionally had been running the tire pressure low all Winter to help provide a little extra traction on the snow and ice conditions. The way it was feeling today has me thinking it is time to add a little air back in for the more Spring-like riding.

After a quick ‘debrief’ with fellow test riders Gail and Bruce, we all decide that adding some air back into the tires would probably be a good thing. After working for a few hours, I need to run an errand, and figured this as a perfect opportunity to take a ride to top off the treads. A nearby gas station has a self-help compressor station with a built-in digital pressure gauge, so I swing in to add some air. The sidewalls indicate a recommended 38 PSI and the gauge for the front tire reads 20 PSI as it begins to pump air into the tire. I inflate both front and rear to about 36 PSI for now, and will see how they feel on the ride back.

Choosing a few curvy side streets allows me to lean pretty deeply around a few corners, something I have avoided for most of the Winter in an attempt to keep the rubber side down (and not be the first person to crash the test bike...). I can hear and feel the outer layer of studs as they click on the pavement leaning into turns, but then the angle goes beyond the stud pattern, and the tire rubber securely and silently grips the pavement. The ‘soft’ feel is gone too, so the added air seems to have done the job to improve the ride. It’s Gail’s turn to take the Zero for the weekend, so it’s time to turn over the keys...

Kyle - Aerostich Marketing and Graphics. Everyday ride is an ‘08 Kawasaki Versys, used to commute about 4500 miles per year.

Rider factoid: Enjoys riding in the rain and the jealous looks of youth soccer players (and a few mom’s) when dropping off his daughter on the bike for soccer practices and games.