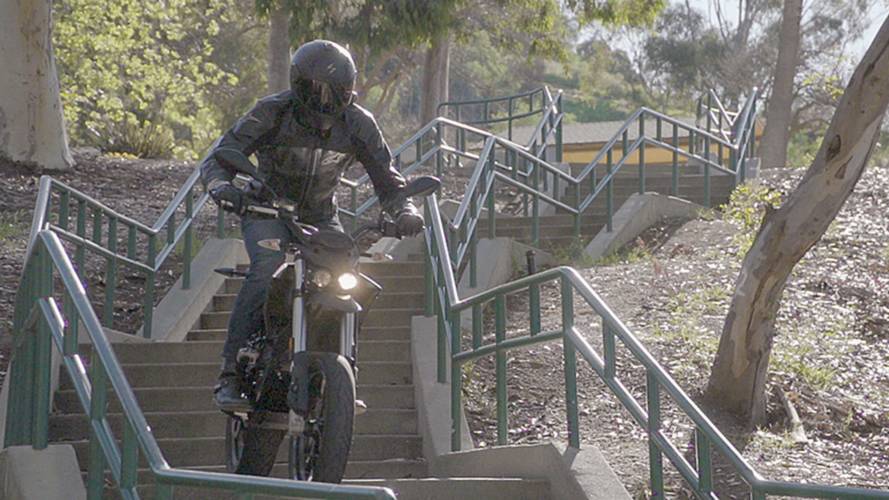 If you're looking for a bike that maximizes fun and, yes, feels like future, the 2016 Zero FXS is for you.

Electric motorcycle ownership comes bundled with some obvious issues, but the joy you'll get from the acceleration, handling, and even silence of Zero's FXS will more than make up for them. If you can be a little open-minded, you'll find the FXS is quite possibly the most entertaining commuter bike available for purchase today.

Let's get the obvious issues out of the way first:

1. Zero claims a range of 90 miles in the city. I have a heavy throttle hand and couldn't get more than 70 miles, but that's because the power delivery is addictive and I found every excuse I could to pin the throttle. Before you start coming up with reasons why that's not good enough, think about how many miles you would get out of a supermoto that could keep up (no, a DR-Z 400SM doesn't count) before it would run out of gas.

2. It'll take about nine hours to charge the battery from empty. It's rare that you'd get the battery down to 0%, but the length of charge time was the biggest issue for me from a day-to-day commuting perspective. If you just ride to work, plug it in, then ride back home, you'll be fine. But if you're planning on meeting someone for lunch, or running some errands, you'll need to become good at planning!

3. There's no clutch or shift lever. While having just one gear means you can 'twist and go,' it does take away a little bit from the moto experience. It does make doing this easy, though: 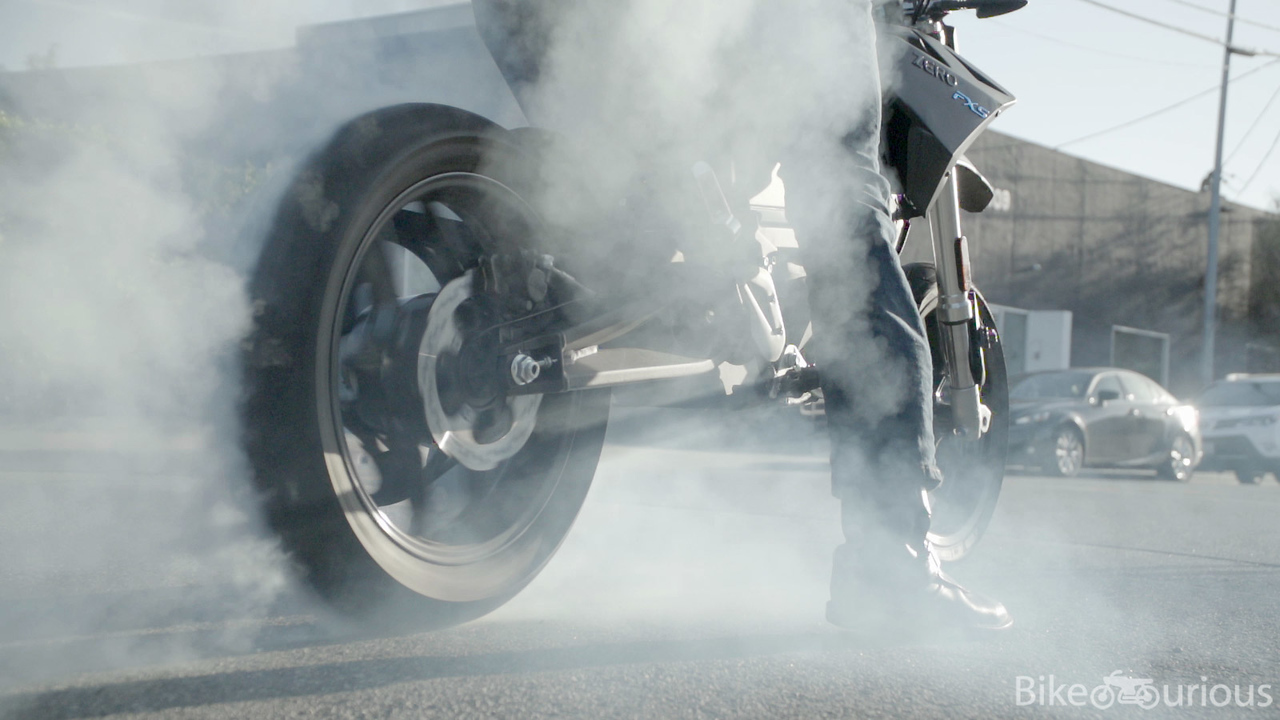 Here's why you shouldn't let any of that bother you: This motorcycle is absurdly fun. There are two fundamental characteristics of the FXS that make it such a joy, and they both stem from the electric drivetrain. I expected the first attribute, which was instant power delivery. The second, however, took me by surprise: The near-silence that comes when your bike is fueled by protons and electrons rather than gasoline.

Let's start with the power delivery. Zero claims 70 lbs-ft. of torque, which is staggering for this kind of bike. For the sake of comparison, that's basically double the peak torque figures of all the new 450cc motocross bikes. Because there's only one gear, you can just twist the throttle for easily replicable joy. From about 15 mph to 50 mph, this bike provides more effortless fun than I can ever remember experiencing on a street bike. All this on-tap, anytime-torque invited me to shoot gaps in traffic that I would not try with other motorcycles. So much so that I had to tell myself to slow down. The power combined with the light weight and upright riding position make the FXS a scalpel on city streets.

You might be wondering why I specified this bike was fun after 15 mph. Zero knows that this amount of power (and especially torque) off the line could lead to trouble, so, sadly, they've toned it down until you hit approximately 15 miles per hour. It was a logical decision on their part but a sad realization on my end as it makes it very difficult to loft the front wheel up. Riders more talented than I are able to do it, though.

You'll encounter plenty of surprises as you get familar with the FXS. You'll occasionally reach for a clutch lever that isn't there. You'll catch yourself wondering if using the high beams or turning on the hazard lights will affect your range. You'll appreciate the convenience of just plugging your motorcycle in at night instead of heading out to a gas pump. You'll wonder if Zero FXS is pronounced "Zero Fucks," and then your friend who spends too much time on the internet will make a dumb joke about a meme that you'll ignore.

What you won't ignore is the the battery percentage meter. Range anxiety is real! With most gas powered motorcycles, fuel gauges are vague and usually in intervals, so you just think that you have half a tank or a third of a tank left. The Zero's battery percentage meter is more like the 'Estimated Range Remaining' readout you'll get in newer bikes. In some ways it's too precise because it makes you more conscious of the energy depletion, and on the Zero you may start to panic a little when you're on the highway.

I noted above that Zero claims a range of 90 miles, but that's only if you're in the city. Because there's only one gear, sustained highway travel requires the electric motor to spin at high RPMs for a long time, and that depletes the battery quicker. So, if you're doing 70 mph on the highway, your range drops to 37 miles. And if you're like me and you hit max speed just to see what this bike can do (83 miles per hour, by the way), you can actually see the battery meter lose a percentage point every 10 seconds or so. To be fair, if you're doing 30+ freeway miles a day, this bike isn't for you. It's just something worth noting.

Also worth nothing— the FXS is available with one battery or two. And despite the extra $2,254 and 42 pounds for the additional battery, you'd be foolish to just leave the dealership with one. While you can remove and replace batteries within about a minute or so, the weight and form factor don't make it convenient to lug them around so you'll probably just keep both batteries in the entire time.

The torque is the same despite the number of batteries, so if you're just running a few laps at Adams Motorsports Park you may want to run an experiment to see if the decrease in horsepower from one battery is worth the 40+ pound savings in the corners. I'd watch that!

As I mentioned before, the biggest surprise of the Zero FXS was the silence. You thought drivers didn't notice you before? This bike will keep your defensive riding skills sharp. That in mind, the silence leads to the best part of this motorcycle: you can explore all kinds of places on the FXS without troubling anyone. Any supermoto is inherently a great bike to goof around with, and in this case, the lack of noise lets you get away with plenty.

Want to take a shortcut down a staircase? Done.

Cut through a park? Have some fun in the process!

Ride by a cop? No problem.

Stop and smell the flowers?

Or just ride through the office and park right at your desk. 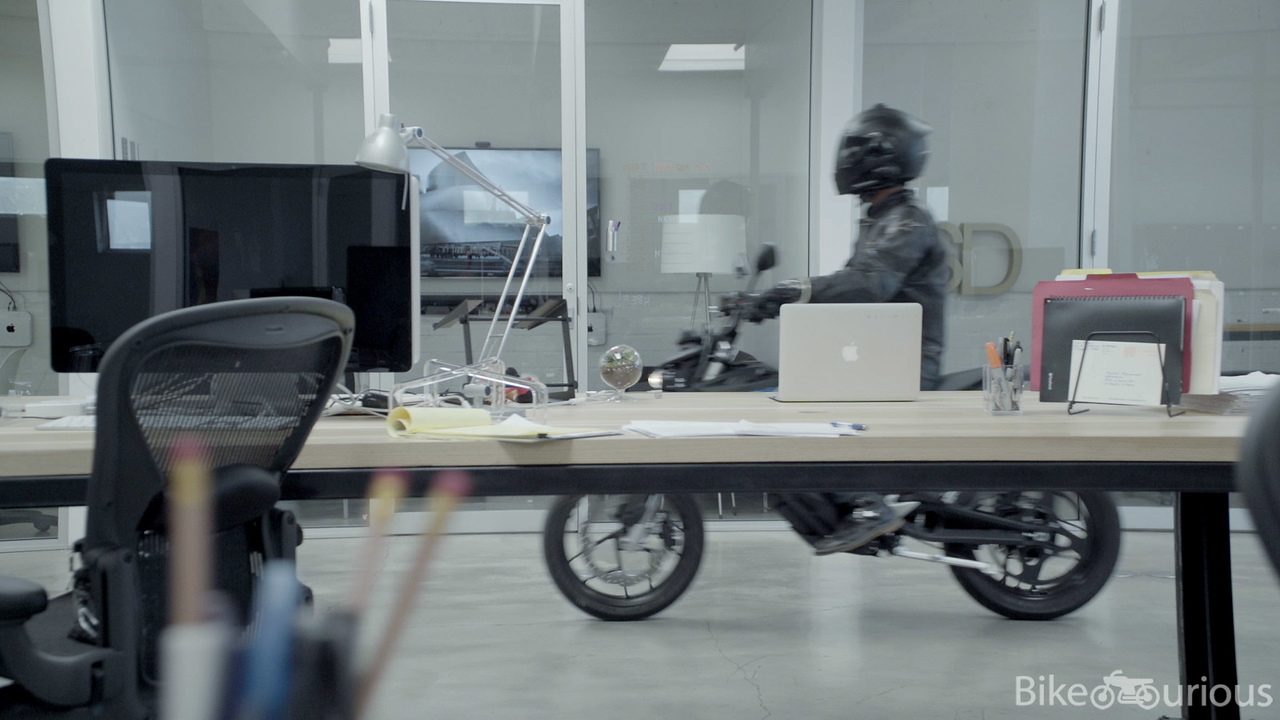 This bike will revolutionize your commute! If you were to do these things with a normal supermoto in Los Angeles, you'd be attracting plenty of unwanted attention. But no one seems to care when you're on the FXS, and it's liberating! However you want to have fun with this bike, you can do it without the worry of disrupting other people. Hop over to a large parking lot and you can do burnouts, top speed runs and practice locking up the rear wheel to your heart's content— someone in an office 30 feet away won't even notice you're there. Just know that if you want to jump this bike, you'll need to equip the optional chain conversion first!

I thoroughly enjoyed my experience with the FXS, but as with every bike, this Zero ain't perfect. My major complaint is with the ABS system. The J Juan brakes are strong and exhibit minimal fade, but the Bosch ABS system is seriously lacking. It kicks in way too early and it often takes too long for the system to re-apply brake pressure. I'm not one of those people who thinks I can always do better than a computer, but at least on dry surfaces, I found the ABS to be counter-productive and I was able to stop in shorter distances with the system off. You can turn ABS off with a combination of buttons, but you'll have to do it every time you start the bike (or pull the fuse, I guess). I speculate that Zero uses the same system in this bike as they use in their ~460 pound SR model, meaning that it's too much for the ~300 pound FXS and thus easily engages the ABS.

A minor complaint has to do with storage for the charging cable. If you're just using the FXS as a track toy, great. But if you're using it as a commuter, you'll want to carry a charging cable around with you unless you've got multiple others waiting for you at your home/office/friend's place/secret underground lair. Conveniently, you can plug the FXS into any standard outlet, and the supplied IEC charge cord looks a lot like what you'd normally plug into the back of your desktop PC. However, those cords are often rated at 10A and the FXS requires a 15A cable.

Because the FXS is supposed to be the lightest, quickest option in Zero's model range, an argument could be made that they're trying to save as much weight as possible. I can sympathize with that, but I think a charging cord is an integral part of the bike and this is a concession that has to be made for practicality's sake. The problem is, there's no place to store one, so I was always lugging around an Aerostich messenger bag or a Velomacchi backpack with me just to store a power cord. There's an odd cylindrical shape in the front of the swingarm that could easily store the cable, and if I owned a FXS I would source some end caps to create a mini storage space: 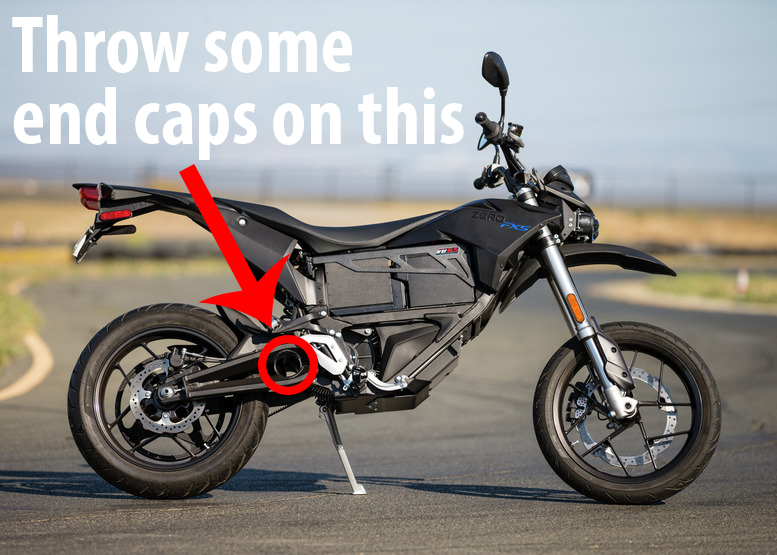 If I'm really nitpicking, I don't care for the side stand. It's surprisingly difficult to get the stand down without looking at it, and I think the silver color stands out in a bad way from the sea of black that is the FXS. Still, those are very minor issues.

Maximum Fun, If Not Distance

The FXS didn't just entertain me, it actually filled me with a sense of wonder. It's legitimately fast and fun at city speeds, and it's just about impossible to get off the bike without thinking it will be the future of riding. Yes, battery technology has a way to go, but Zero isn't the only company investing lots of money into that field. The advancements will come. Pedestrians (and especially cyclists at stop lights) would constantly ask me the usual questions: price, range, and charge time. Whenever I told them the range, they would usually respond with a confused facial expression. If you want maximum range, go get a Zero SR with the optional Power Tank. But if you want to have as much fun as possible on an electric motorcycle, grab yourself a FXS, an excellent addition to Zero's portfolio.