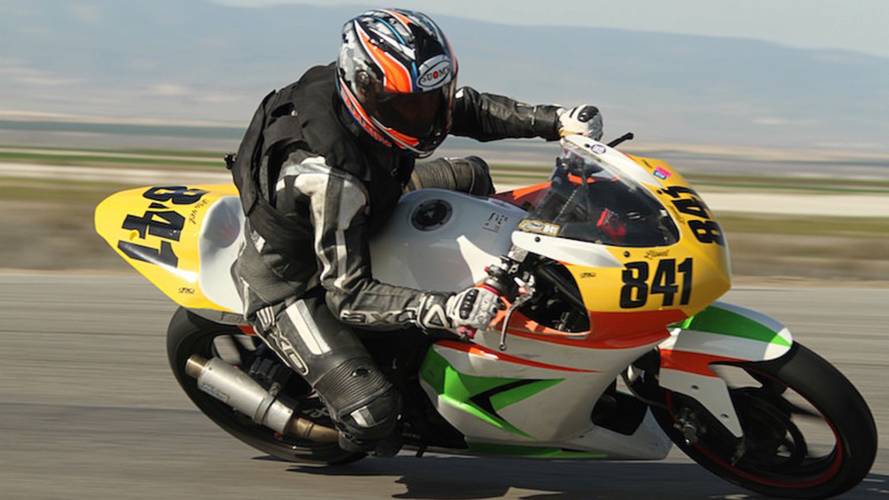 I hit a false neutral. I was cookin' through a corner that required to me be full throttle on a small moto. For me, it was hard to process what to do in that short amount of time. Before I knew it, I stood the bike up and was about to go off track because I couldn’t fight my target fixation. My unrefined instincts kicked in and, in order to slow myself down, I grabbed a handful of front brake.

The crash happened so quickly. I hit the ground headfirst and stayed that way until I finally came to a stop. There was pressure building around my torso as I slid off the track in a crunched position. Once I came to a stop, the pain slowly started to creep up from the bottom of my ribs.

I took a deep breath and felt tightness around my chest, but then immediately realized it was my Hit Air vest airbag— a system that deploys in .25 seconds once you’re ejected from your moto —firmly holding onto my chest and neck area. I took another deep breath, which was a sigh of relief. As quickly as the pain came, it was gone. I relaxed, since I knew nothing was seriously injured from the hips up. I couldn’t say the same about my knee though— a rock penetrated my leathers and left a gnarly gash. Oh well, it didn’t prevent me racing later that day.

It All Started in Japan

Back in 1995, Mugen Denko began to research an airbag system for motorcyclists. The actual jacket was invented and then patented by Kenji Takeuchi, but in 1998 Denko showcased the first Hit Air vest to the world. Since then, police forces from countries like Japan, China, Turkey, France and various others use Denko’s vest. The company has also expanded into the equestrian market, making it safer for those on horseback to ride their unpredictable “vehicles.”

The Hit Air vest I wear is their race-specific one; they do have various street-specific vests, as well as jackets with the airbag system built in them (more on these later). It's important to emphasize that Hit Air vests aren’t only for those who do track days and/or race.

I first saw and heard of the Hit Air vest from Alan Cunningham, owner of SafterMoto. Alan uses one while racing for the American Federation of Motorcyclists (AFM). He and his wife Beth, who helps him run the business, are at all the AFM races, so I was exposed to Alan and a handful of racers hitting the track sporting Hit Airs.

When you visit the SaferMoto site, the first thing you will read is a quote as to how he started SaferMoto:

“After my first accident, doctors were astonished by my lack of injuries after such serious accidents, and I became evangelical about the products and therefore decided to become a distributor. If you weigh the cost of an MRI or other medical treatments versus the cost of our vests or jackets, it’s the best insurance you can buy.”

And since I was formerly a corner worker for the AFM, I’ve seen people crash wearing the vests, so I’ve seen them deployed right before my eyes. Once I started racing, I knew I needed one to minimize any potential injuries.

So what makes this Hit Air so great? Well, for one, the brilliance is in its simplicity. Once you put on the vest, you fasten yourself to the bike using a coiled wire (or what I call a tether). There are two tethers: one that’s attached to your vest and the other, which is installed on your moto. Both tethers are connected via a buckle.

When a crash happens, a 60cc CO2 cartridge deploys once the tether is pulled. The Co2 then fills the airbag built in the vest. It takes 66 lbs. of pressure to deploy the cartridge, so you won’t set it off by simply hoping off the bike while still attached.

Fit wise, the race vest is made specifically to go with one-piece suits. It fits snuggly around both you and the hump that comes with most one piece-leathers. If you’re thinking about getting a vest, Alan or Beth are great to consult in regards to which size will fit you best.

The Hit Air Racer vest also comes with a back protector (covers the mid back) that I totally wear...along with my full-length (upper back to tail bone) back protector. I mean, why not have as much protection as humanly possible? Speaking of protection, as you can see in the image below, once deployed the airbag protects the majority of the upper body area: neck, chest, and ribs.

To give you a better idea of what the vest looks like when deployed, watch this YouTube video posted by Marcus Zarra. Skip to the 8:45 minute mark and focus your attention to the right side of the screen. You will see my friend Viet take on a nasty spill, and from what I can recall, he only suffered a bruised elbow from the whole ordeal.

After the crash— and after you get up dust yourself and the bike off —it takes no more than 10 minutes to reset the vest. You simply squeeze the air out, put the airbags back in place, re-attach the tether to the vest, replace the CO2 cartridge and bam! You’re good to go out again. The goal is to not crash again, right? But if you do, don't fret, the vest is designed to be repeatedly deployed.

When it comes to price, the Hit Air Racer vest retails at $489.00. Replacement CO2 cartridges retail for $22. In my opinion, I think the vest is worth every penny. I also agree with Alan: The vest is a small price to pay when compared to a trip to the ER.

Below are the specs for the Hit Air Racer vest:

As I mentioned earlier, Hit Air offers a variety of styles for street riders. The specs are very similar to the racer vest, with minor differences. For example, there are a few models that come with reflective material on them to improve visibility for motorists, especially in low light conditions. The street vests start at around $389 and go up to $519.

Not a fan of having to put on a jacket and then a separate vest over it? Hit Air also sells jackets that have the airbag system built in. There are various styles to choose from, and prices range from $499-$699. There’s also a women's jacket, the FR-B, which you can also turn into a vest!

What About the Big Dogs and How Does Hit Air Compare?

As most of you know, Dianese and Alpinestars have similar products. Some may argue that what these two offer is better, especially since their airbag system is built into their one-piece suits. It’s definitely a great idea because you don’t have to worry about putting on another piece of gear. The price is obviously going to be higher than their other suits, but that’s fair because there’s a good bit of technology that goes into both of their systems. Alpinestars even offers jackets with the same built-in tech.

I haven’t tried the other two suits, so I can’t really do a side-by-side comparison, but I would still rather have the Hit Air vest. First, if you go down in either suit (or jacket), you have to send it back to the manufacturer to reset it. To me, that seems a bit frustrating because I’d need a backup suit on hand. Second, you have to charge the airbag system for the other two, while the Hit Air vest is much simpler to reset (as I mentioned above). I love the fact that I can pack away my Hit Air vest for the season and not worry about charging— just put it on, zip it up, and pin it!

If you couldn't tell, I really swear by this vest and highly recommend it. It's well constructed, sturdy, easy to maintain and to reset if deployed. The price is right and it prevented me from breaking a collar bone or potentially worse...what else could you ask for?

Check out all of Alan’s video that demonstrate the awesome features that come with the Hit Air vests here.