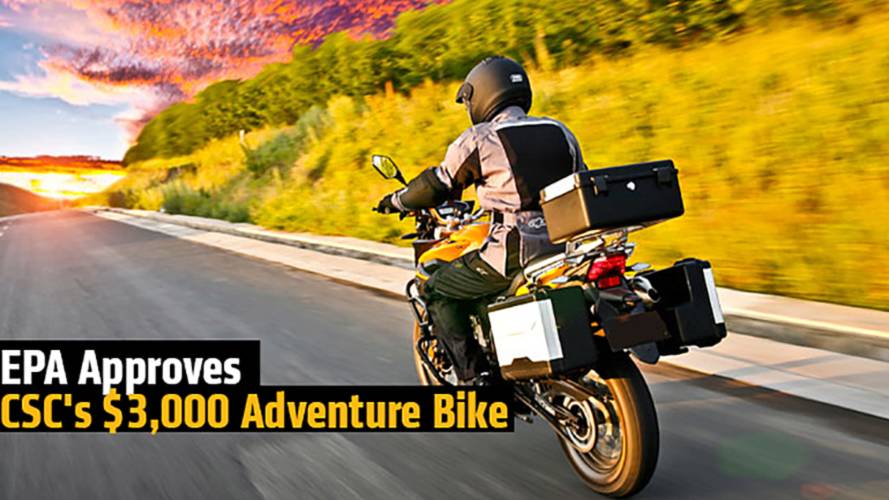 The small displacement, minuscule price tag Cyclone adventure bike from CSC Motorcycles gets certified for sale in the US!

Remember our posts about the $3,000 adventure bike coming to the US, late last year? We've been excited to ride the new bike, but it involved some stipulations, as until today, there was only one CSC Cyclone legal in the USA. The company has been on edge waiting word from the US, which could effect the price and manufacturing of the bike if it didn't met certain US regulations. As of today, CSC can rest easy as the EPA approved the motorcycle.

California Scooter Company (CSC Motorcycles) started out as a manufacturer of reimagined Mustang motorcycles. Now they have begun importing a bike that many in the adventure market have been pining for. A small displacement, full-featured ADV bike, for a targeted MSRP of $3,495.

The CSC Cyclone has a 250CC liquid cooled, fuel injected, and counter balanced motor with a 6-speed, adjustable suspension, and a set of hard luggage standard. They even come with engine guards and a 2 year warranty!

One of the items that has been holding CSC back has been EPA certification. The Government is no longer an obstacle and EPA has certified the Cyclone for sale in the US. California still requires C.A.R.B approval to sell in the home state of CSC.

“The combination of these two emerging markets – the adventure touring and the 250cc segments – represents a tremendous opportunity for CSC Motorcycles and for our customers,” Seidner said. It’s good to see that critical experts in this field agree with us; this is a great motorcycle and at its $3495 price, it represents incredible value.   We know that the Cyclone’s quality is as good as or better than any other motorcycle on the market today, including expensive European imports that cost 8 times as much as the Cyclone.”

Yes it's made in China and yes it's 250cc, but this is what so many on the ADV community keep asking for. At $3,495, people now need to speak with their wallets and send a message to the other manufacturers about what they are willing to actually pay for.

The 250cc market has been exploding in the last couple years with Honda, Kawasaki, and even Suzuki introducing bikes that could easily power a competitor to the CSC. Can they beat it on price or will reliability become a major issue? Probably not, but the major manufacturers  can easily package more features from their parts inventory to make a competitor with more safety items.

We wanted to show another bike that CSC makes and is pretty damn cool. Maybe we can get a review on one of their Mustang bikes? Who wouldn't want to see Jesse Kiser ride one of these around?