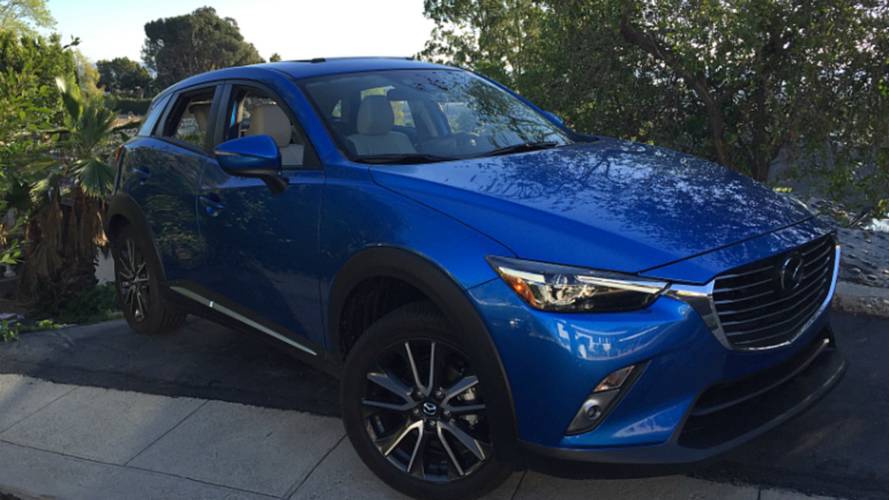 Ten years ago, the term "crossover" barely existed. If you wanted the utility, space, and style of an SUV, you would have had to sacrifice the on-road driving characteristics of a sedan. People chose the latter, and SUVs sold like hotcakes. But SUVs back then could almost be considered trucks today. In a move to appeal to an even larger market, the crossover was born; giving consumers the higher ride height, practicality, and style of an SUV without sacrificing fuel economy or a noticeable difference in on-road performance. Today, crossovers come in all shapes and sizes, and have become some of the most popular vehicles on the road. One of the newest crossovers to hit the market, the 2016 Mazda CX-3, is also one of the smallest, and it somehow crosses over even further from a small SUV to a sports car.

The 2016 CX-3 is an SUV in the mildest form. Without the black plastic cladding lining the bottom edges of the car, it could easily be mistaken for a hatchback. This isn't necessarily a bad thing, because the CX-3's light weight, low center of gravity, and precise steering translate to a serious amount of fun on a twisty road. On such a road, what the CX-3 lacks in outright power is circumvented by its ability to carry speed through the corners, thanks to a willing chassis and a brilliant 6-speed automatic transmission with paddle shifters and a Sport mode that keeps the car in lower gears for improved response. However, when attempting to pass, the meager 146 hp put out by the SKYACTIV four-cylinder engine struggles to move the CX-3 quickly enough. Still, an 8.1-second run to 60 mph places the CX-3 at the top of its class in terms of acceleration. The engine's low power output is only noticeable during pedal-to-the-floor acceleration. Around town with more casual driving, the CX-3 is certainly quick enough, with a surprisingly decent amount of low-end torque and a responsive accelerator.

The Mazda CX-3 is undoubtedly a small car, and it makes no apologies for its diminutive size. It's the comically aggressive midget of the crossover world. Gone are the cute "smiley faces" that dominated the front ends of every Mazda only a few years ago. The CX-3 never smiles. It glares at you through pinched LED head- and taillights, and swaggers down the road with its aggressive creases and swoopy curves, definitive of Mazda's new Kodo design language. Out back, a blacked-out D-pillar creates a cool wraparound effect for the rear glass and gives the CX-3 a "floating roof" (a-la Range Rover), which lends the car an even more sporty look. Overall, the new CX-3 looks upscale, aggressive, and perfectly compact.

The Mazda CX-3's tidy exterior dimensions don't lead to any surprises inside, unlike Honda's spacious HR-V. Space is limited front and rear; the rear seat will not fit taller individuals, and cramming three people back there might turn into a game of Twister. Buyers regularly toting strollers should be mindful of the fact that a regular stroller will not fit in the relatively small trunk without the rear seats folded. The CX-3 is great for grocery runs and daily use, but forget about taking it out for a family vacation.

Meanwhile, the interior's design and materials are first-rate, and easily best-in-class. Our CX-3 Grand Touring tester featured soft, stitched porcelain leather on the seats and a broad strip across the dash, an especially upscale touch that nicely breaks up the sea of black plastic on most cars in the segment. Black alcantara can be found on the seat inserts and door panels, and a splash of padded red leather lines the armrests and knee pads. The dash is beautifully minimalistic, and somehow, the floating infotainment screen works in this application and is perfectly placed in the driver's line of sight.

The available technology on the new CX-3 brings it even further upmarket. The CX-3 can be equipped with a multitude of advanced safety systems that make driving safer, easier, and more convenient. All CX-3s come standard with a rearview camera, which is particularly useful due to the small rear window that restricts visibility. The mid-level Touring model bundles in standard blind spot monitoring and rear cross-traffic alert, while the up level Grand Touring model adds up level features such as leather, LED headlights, and a Bose sound system. Overall, if space isn't a priority, the new CX-3 is a sporty, stylish, and well-equipped crossover that's fun to drive on a daily basis.