A Pleasant Surprise — First Impressions of the SKULLY AR-1 Helmet 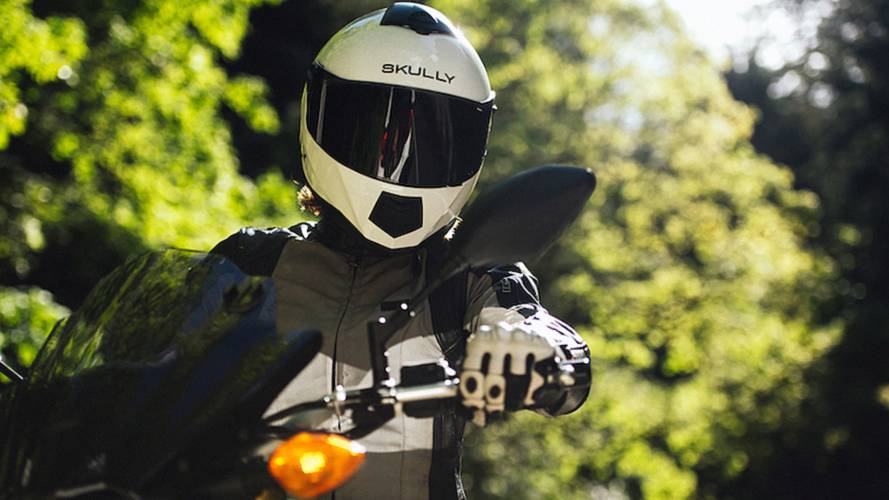 I headed into the Santa Cruz Mountains to meet with SKULLY’s lead photographer Trevor and their videographer Will for a photoshoot. I signed up knowing I would get nothing in return— other than the opportunity to test out a cutting-edge helmet (and have cool photos taken of me, too).

I love riding and for those who know me, I have mad respect for any rider who creates something (especially gear) for their peers. Such is the case with SKULLY, founded by Dr. Marcus Weller who’s no stranger to motorcycle accidents.

I knew that beforehand, as well as some basics about the helmet. The SKULLY AR-1 has cool technology in it, the star of the show being the heads-up (HUD) display that helps motorcyclists see behind them. Or as SKULLY puts it, a “180° blindspot camera” that provides “complete situation awareness.”

I’m not going to lie, I was a bit nervous to try the helmet out at first. I worried that the HUD would be too intrusive and distracting, thus hindering my ability to take on the twisty Santa Cruz mountain’s roads. But, because I like trying things that initially make me uncomfortable, I went with it.

I was about to have a total of four hours with the AR-1 in the mildly chilly Santa Cruz air...

When Trevor handed me a white AR-1, I was stoked on how light it was for what is included. Meaning, for all the technology that this helmet has— such as the HUD, built-in speakers, and Bluetooth —I was expecting it to be heavier. As I inspected the helmet further I couldn’t help but think, “Wow. This is a really nicely built helmet.”

The design is super cool and nothing felt cheap. Everything from the chinstraps, to the air vents, to the visor is made well. Speaking of the visor, the AR-1 comes with a photochromic visor, which changes tint levels depending on how bright or dark it is. This is an awesome feature since you don’t have to worry about switching visors from dark (day) to clear (at night).

After putting on the helmet, Trevor gave a quick run down on the helmet's features. First, he gave me a Samsung phone to take along for the ride. The AR-1’s GPS and voice control is a feature that’s controlled by an app that will soon be available for both iOS and Android. He then briefly turned on the voice navigation and some tunes (more on this later). “Whoa!” is the first thing I thought. It’s incredible how futuristic it seems, but, then again, it’s not futuristic by any means...it’s now.

Next, he told me to walk around and get used to the HUD, emphasizing to not focus entirely on the HUD; I needed to quickly glance at it and then move my eyes up again. When I first looked through the HUD it seemed like a fun house mirror. It was made this way to optimize the viewing angle and therefore accurately reflect depth perception. So the image in the center will appear much further away than it is in reality— essentially it’s like a fisheye lens.

The feel of the helmet merits it’s own section because this is by far my favorite feature. Once I put it on, it felt amazing against my skin. Actually, amazing is an understatement, I honestly didn’t think a helmet could feel so nice. I mentioned this to Trevor...at least four times.

So what makes the helmet feel like it’s lined with silk? The material used for the liner and cheekpads is called "outlast technical liner," which is the same material NASA developed for space suits. It’s heat and bacteria resistant (anti-microbial) to keep the inside of the helmet as comfortable as possible.

To go back to the weight of the AR-1, once it was on my head it didn’t feel heavy. The weight was evenly distributed throughout, adding to the helmet’s comfortable feeling.

The sound quality is exceptional. Guys and gals, believe me when I say the sound that comes out of the speakers is so good! I wish I could have tried out the GPS feature, but didn’t really think about it on the ride. However, I did briefly hear the male British voice that provides the voice commands, and he is crisp and clear.

I rode the first hour with music on and I loved how it cancelled out any and all wind noise. The music also turned up a bit when I got going at faster speeds and turned down when I slowed down. However, once I did turn off the music, there was a bit of wind noise, but that’s probably because I had all the vents open. To me it wasn’t a big deal anyway since I’m used to riding with helmets that aren’t quiet. Besides, if you own this helmet you will always want to ride with tunes on in the background. It’s quite nice.

The Star of the Show

So let’s talk more about the star of the show: the HUD. Did the HUD impede my vision? Was it too distracting? Was the fisheye lens disorienting? The short answer to all these questions is no. In fact, it was incredibly unobtrusive and, at times, I forgot it was there.

The HUD can be adjusted with a small knob that’s found right underneath. You can bring it higher into your field of view, or lower. I had it to the highest it could go and it still wasn’t hindering my view of the road.  The best way I can describe it’s functionality is that it’s just like your mirrors: It’s there when you need it, and when you don’t, you don’t look at it. It’s that plain and simple. I actually feel like you need to train yourself to quickly look down at the camera so you can get used to having your eyes go there when you need them to.

I see you and I don't have to look in my mirrors!

As for the camera view, the fisheye lens view helps you see all of your surroundings right behind you. It was nice being able to go through the turns and see if a car was right behind me and how far. Before trying this helmet, I would constantly look in my mirrors to ensure no one was close. With the helmet, I technically didn’t have to take my eyes off the road.

Point blank: I really do feel if you purchase this helmet, you get what you pay for.

And I must note: For those who are waiting for your AR-1, or are thinking of purchasing one in the near future, it looks like you’re getting an even better helmet than what I wore for four hours. Via their Facebook, I found out they’ve made improvements on the following items:

Kudos to Marcus Weller for not only envisioning a high tech helmet for motorcyclists, but also one that improves rider safety. For more information on the AR-1, check out their FAQ page. Also, stay tuned for a more in-depth review on SKULLY’s AR-1 in the near future.