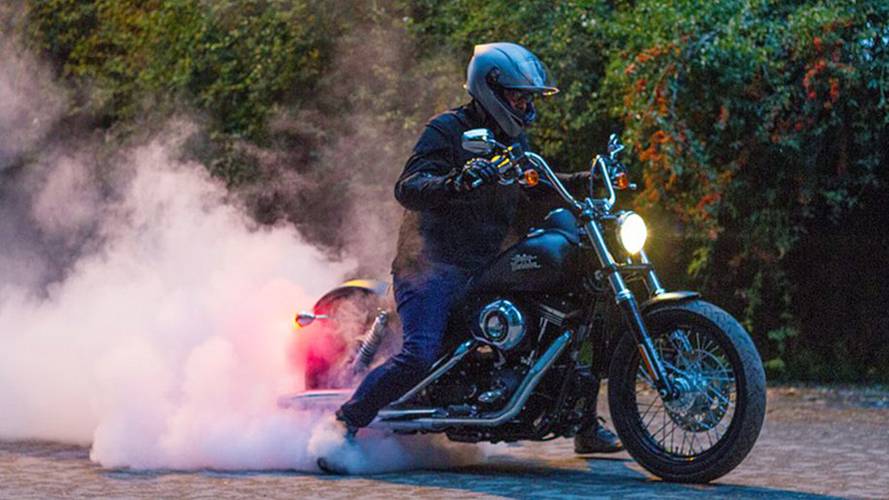 Metzeler recently flew us to Italy to test the new ME888 on a variety of new bikes - yeah, my job doesn't suck. We spent time riding through vineyards, volcanoes (no joke), Italian villages, and mountain roads. So pull up a selection of freshly cut cheeses, pop open a bottle of wine and sit back because you’re in no hurry. This is the ME888 tire review from Italy, godere!

Unless you’re a tire engineer, you may have a hard time understanding the development behind the ME88. Frankly, if you’re not a tire engineer, you probably won’t care how it all works either, instead you just want it to know if it does the job it’s tasked to do. So allow me to lay it out for you in the least techy way possible, starting by saying it does exactly what it was set out to do.

What’s the best way to test a motorcycle tire? Well, burnouts of course. We were able to sneak off with our friends at Iron & Air for some burnouts on a Harley-Davidson Dyna with Metzeler ME888 Marathon Ultra shoes. It may sound silly, but for me this was the biggest and most obvious display of the ME888’s grip. It took some gusto to get the first tire-smoking photo, but the second burnout was nearly impossible to perform. Once the tire took some heat, it became sticky and gripped to the road. But the ME880 already had grip — the ME888 was designed to enhance a few additional areas of performance.

A replacement for the ME880, the appropriately named ME888, is mostly found on cruisers, think Harley-Davidson or Victory. With the addition of a new name comes some new specs. Metzeler wanted to improve three areas of tire performance: wet/cold performance, extended mileage and in turn, allow the tire to wear with more regularity.

Of course, we couldn’t have experienced mileage concerns on such a short trip, plus your local tire shop probably doesn’t even have this tire stocked just yet, it’s that new. But our Italy trip did consist of many wet, cold days and slick conditions. Our first ride started with a visit to Metzeler’s small Testing Department Office in Giarre (small only in comparison to headquarters) beginning in a little town on the coast about a hundred kilometers south of the testing facility. With a small group of about eight riders, it was easy to switch between three different tires (you’ll see other reviews soon) and styles of bikes throughout our week-long trip.

For our ME888 tire testing ride, it seemed every time we stopped we switched bikes, between a selection of worn out Goldwings, a few Sportsters, a couple of Softtails and my personal favorite a tall-bar Dyna. I opted for the Dyna after leaving the testing facility. We ventured into town, which at that moment, was being drenched in rain.

We pulled out onto the main road, which was fresh with rainwater. I dumped the clutch for a nice little slide into traffic. The tire spun freely as I added some throttle input (the lazy man’s rolling burnout). Once I stopped messing around, the tire’s control snapped back and it became more difficult to perform the same action again. It appeared that little bit of heat activated the tire, keeping grip in conditions I didn’t think possible.

The roads were still cold and wet as we turned into a town that was rotten with weird intersections. My foggy visor masked the already hard to see traffic lights. The asphalt turned to cobble-stoned roads as we entered the 17th-century town. The roads would send chills down the average rider’s spine. Now coat these stones in water with poor drainage and it became something GS Trophy riders would say F*** that to.

Our ride leader, Salvatore Pennisi, was out front when a car pulled out in front of him. He was stuck on one of the Goldwings since no one wanted to ride that big bike in the rain. Quick on the bars, the bikes snapped sideways as he swerved around the oblivious driver. Salvatore got the bike back under control immediately, keeping the shiny side up the entire time. The image made me think I was 10,000 miles away, leaning against the wall at Perris, but I had to snap myself back and keep my concentration as we weren’t out of harm’s way just yet. My alarmed sense of riding was unnecessary because the tire and bike remained under my full control for the remainder of our wet ride. The wet riding performance was honestly surprising during the remainder of our Italian sojourn, which consisted of on and off again rain for almost the entire week.

Within in the first few miles, I could tell the new ME888 Marathan Ultra had better cold weather performance than its predecessor. How did they make it better, though? Well the seemingly biggest area of improvement is the tire patch, you know, the surface of the tire that meets the road. This came from many structural differences with the ME888 tire. In simple forms, Metzeler changed the entire profile and shape of the tire. The new shape and internal structure pushes the stresses from the road to the sidewall— no longer just a place where you need to decided if you want black or white.

That's me cruising on the Goldwing.

The new structure has a multi-radius design, rounded sidewall and increased curvature. This all adds up to a wider footprint, which you may think decreases the mileage as there’s more rubber in contact with the road, but instead it does the opposite. The bigger footprint decreases stresses on certain points of the tire, increasing the high-speed stability, overall grip/performance and the mileage simultaneously. But this is far from the only area of improvement Metzeler was able to produce.

According to Metzeler, “New sidewall profile and carcass ply geometry allows to convey stresses away from the tread pattern, improving wear regularity and making ME 888 Marathon Ultra retain all its benefits until the very end of its lifecycle.” Because, remember, Metzeler was after not only mileage gains, but that the tire wear evenly, extending the tire’s life.

The tire patch has been widened by about 17 percent, resulting in a 14 percent tread contract area (footprint) increase over the 880. It’s a major improvement for the tire’s performance across the board, wet weather, hard riding, etc. This wider footprint means less hot spots and more consistent stresses on the tire. Plus, it's just flat out more rubber on the road, and that’s easy to understand.

Allowing the tire to wear more evenly will improve the tire’s life and performance. Tread pattern also becomes a major factor in how the tire wears and therefore improves the wet weather riding performance throughout the longer life, if it’s designed right.

The new tread pattern angle changes along a given groove, this is to assist with different stresses that the different parts of the tire deals with. The grooves are also designed so that as the tire wears down the grooves are still working efficiently even as less tire surface and tread depth remains. As the depth disappears from usage, the treads widen. Again, the tire wears regularly, meaning a longer life tire.

The ME888 has tread patterns that don’t connect with each other; formerly they would zig-zag across the tire in a square pattern. Now, the intersections of the tread are stopped by compound bridges, which increases the tread block’s robustness.

Hopefully, this has caused you to think differently about tires since up until now I haven’t mentioned the compound in the tire itself. The engineering team developed this tire from the inside out, like redesigning a house they started with the foundation. The actual rubber and compound of the tire is only an element of the design— the biggest area of improved life comes from the reduction in structural stress. “Mileage improvement by reducing structural fatigue,” says Metzeler.

The new compound has another level of engineering that’s hard to follow. It’s a mix of Polymers, SSBR and resins that appeal to the tire compound during wet or cold riding, then there’s the structure and bond system of chemicals that keeps the high mileage and abrasion resistance on the tire. Essentially, it felt like the compound was sticky and comfortable, while the structure remained stiff enough, like a shock, to keep the tire from wearing out too quickly.

Our miles probably totaled 500-1,000. Oh, I mean 800-1,600 kilometers, exclusively on the ME888 in a variety of conditions throughout Southern Italy. Then we ventured into the Milan headquarters for a meeting with executives. While I’ve done tire testing before, I’ve never met with high level execs where they presented all the techy info about why the tire was so good. They then started asking us about the American market...huh? Why are you asking me? Well, us journalists are attentions hogs, so the opportunity to talk was welcomed.

The Metzeler ME888 does not have a branding deal with Harley-Davidson. Instead, this tire is the aftermarket option that many hardcore H-D guys may not consider and some H-D Dealerships may not keep in stock, for those “If it ain’t H-D it ain’t sh**” riders. Metzeler doesn’t want to fight with other brands for the honor of slapping “Harley-Davidson” on the side of the tire. Something I personally wouldn’t want to do either, if I owned a tire company.

My question to them was why aren’t they hitting up Victory and Indian more? As I can only assume Victory/Indian buyers are in general more concerned with performance than the typical H-D rider. The tire answer: the ME888’s construction is actually a lot more difficult and cost-involved for tires designed to fit Victory/Indian motorcycles. When I asked this question, an engineer said that while he agrees with me, the different frame design of the Victory platform meant changing the structure of some of the tire sizes. It’s not simply making an H-D tire in a new Victory size. Metzeler offers a Goldwing tire size that will fit a Victory, but again the suspension causes the need for a new internal tire construction. While this sounds like a blank spot in the parts catalogue, I think it’s a huge tell of how well the tires are engineered. I would have never considered how suspension could impact tire construction, especially for that bike. I was wrong.

With that being said, Metzeler does have a variety of Victory and Indian sizes in the catalogue.

I’ve run Metzeler, mostly the ME880 Ultra Marathon on my motorcycle since I first built it 12 years ago. It has been the tire of choice even though it hasn’t always been the cheapest option, but it does give me more performance and life than the typical competitor, plus I don’t have to pay the up-charge to have the H-D badge on the sidewall.

Now I want to say this is a superior cruiser tire and it probably is, but that’s hard to state without head-to-head testing. There’s still time as the ME888 is brand new. You’ll likely not see it in stock at your local shop, but it’s certainly a tire worth asking for.