We Race the RideApart Suzuki GSX-R600 at Willow Springs 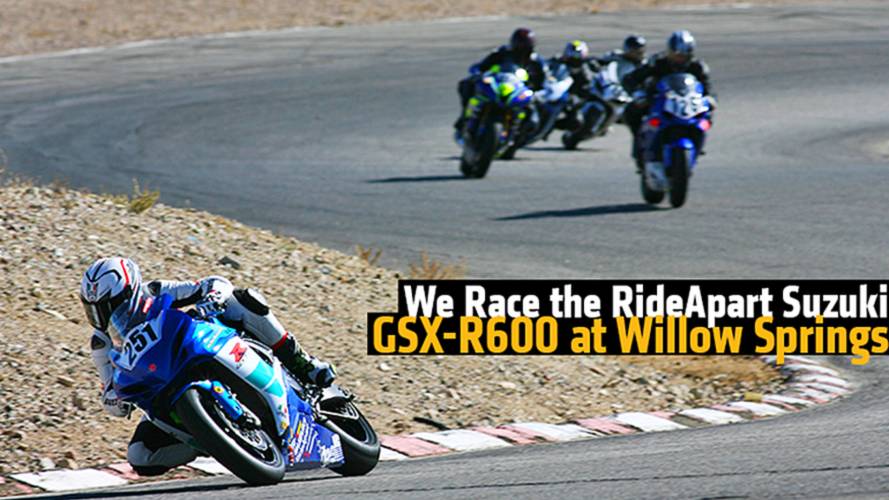 In October, we conducted an experiment to see how well our 2014 Suzuki GSX-R600 long-term project bike could perform on the track in 100% stock form (aside from racing requirements such as race bodywork, coolant flush and safety wiring) against the other highly-modified, dedicated race bikes in a proper race with Moto West GP racing series. We were pleased to finish in 4th position in the Expert 600 class, proving that sportbikes today, right off the dealership floor, are quite competitive despite contrary belief.

After returning from this race weekend, we couldn’t help but wonder how the bike would perform with a few basic, bolt-on modifications. We wanted to test out a few products that are popular additions to sportbikes today but also mods that are relatively cheap, easy to install and do not require irreversible alterations. Our friends at Akrapovic, Bazzaz, K&N, and Motorcycle-Superstore hooked us up with the following goodies:

After installing these parts, we dynoed the bike to confirm the modifications’ performance gains (click link below). Pleased with these figures as well as how well the bike ran commuting on the streets, we were ready to head back out to the track for the final round of the 2014 Moto West GP race season. On Friday night, we stripped the street fairings and installed the race bodywork (in 1 hour) then headed out to the big track at Willow Springs International Raceway in Rosamond, CA.

Saturday consisted of orienting ourselves with the new exhaust, intake, electronics and gearing modifications. The engine produced noticeable power gains in the middle and top end of the powerband. The bike would pull much harder out of corners and continue to accelerate further up the RPM range.

Exhaust notes emitted by the new Akrapovic full race system was throaty but not ear-piercingly loud with the “silencing” insert installed in the muffler. This new exhaust system, complimented by the K&N air filter and the auto-tuned Bazzaz electronics, produced a very smooth power delivery without any hiccups aside from minor backfiring during downshifts.

The Bazzaz quick shifter unit worked extremely well providing near-seamless positive gear transitions by cutting ignition power for just an instant when the gear shifter is touched. This system seemed to work even better than those on the Triumph Daytona 675R and Aprilia RSV4 Factory, both of which really impressed us when we first rode these bikes. The Bazzaz unit even came with an adjustment module that we mounted on the forward, left side of the frame enabling adjustment (more or less foot pressure required on the shifter to activate the system) on the fly for further fine-tuning. However, a longer lead wire to the module would have been nice in order to mount the adjuster closer to the rider’s hand.

Toward the end of the day on Saturday, we ran into a rather unique problem during one of the last practice sessions of the day. At the very end of the main straight away, at about 14,500 RPM in 6th gear (roughly 150 MPH), the lower fairing became detached from the upper fairing, caught wind and ripped off of the bike. After exiting the track immediately and retrieving the unintentional wind sail from the track clean-up crew, it was discovered that the poor alignment of the Hotbodies race bodywork enabled the wind to separate the lower fairing from where it attached to the upper, severing the lower where it was bolted to either side of the bike frame. Luckily, the quick and innovative pit crew utilized highly-proprietary techniques (delicate combination of zip ties and Gorilla Tape to reseal the lower fairing and reattach it to the bike.

Re-tuning the suspension settings on the stock components for the much faster but less-technical “big track” at Willow Springs was also on our to-do list for Saturday practice. In a never-ending pursuit of more feel in the front end, even on the very fast sweeping corners such as turns 2 and 8 of this course, we bumped the compression clickers up on the front forks and added some rebound damping as well. We also applied stiffer overall settings by increasing the preload in the front and rear. To smooth out some of roughness felt in the high-speed sweepers and address the problem of running wide on corner exits, we took some rebound out of the rear shock. By the end of the day, we felt pretty confident with our suspension settings.

On race day, we installed a fresh set of Dunlop GP-A Pro medium compound DOT race tires and set pressures to 28/21 PSI cold, front/rear. When the green flag dropped, the GSX-R launched with force off of the line. The bark of the Akrapovic exhaust and wine of the new chain and sprockets were a stark contrast to the audible experience (or lack thereof) during the race weekend one month prior.

We entered turn 1 in 2nd place and drove out hard, holding the throttle wide open in 3rd gear. The combined power of the AMA-spec Yamaha YZF-R6 and the raw talent of the rider on board, continued to distance 1st place further and further out of reach. Our suspension settings may have been a bit too far on the stiff side because we lost the front end once mid corner in turn 1 as well as on-throttle on the exit of turn 3 headed up the hill (despite traction control enabled and manual adjustment set to -2 intervention). Eventually, we were picked off by another YZF-R6 piloted by a very quick privateer as we came onto the main straight, pushing us back to 3rd position. On the second to last lap, the rider in 4th, on a Kawasaki ZX-6R, slipped passed us by late-braking into turn 3. However, our speed down the straights and entry into the corners were quicker so we exchanged positions again on the final run down the back straight into turn 8 and holding the 3rd place spot through the checkered flag.

Finishing in a podium position in the 600 Expert class was a great achievement especially on a double-points weekend, the final race of the season and at the highly-competitive big Willow Springs track. However, we were most impressed with the bike’s performance and the added benefit provided by our relatively-basic modifications. The added power output was beneficial for obvious reasons, but the increased acceleration of the new chain and sprockets, smoothness of the new power curve and convenience of the quick shifter made the bike easier to ride quicker around the race track. Adding the quick shift, traction control and map selection adjustment modules enabled even further customization. Finally, the music of the engine sucking more air through the airbox, processing fuel more efficiently in the combustion chambers then channeling exhaust gasses quickly out of the muffler accompanied by an excellent new exhaust note didn’t hurt either.

To seal the deal, once we retuned home on Sunday night, we had this race bike stripped down and rebuilt for the street (retaining all of the race modifications aside from the bodywork) in one hour. Our GSX-R600 project bike is now just about the ideal bike for commuting during the week and racing on the weekends.