Passing the Torch — Teaching the Next Generation of Riders 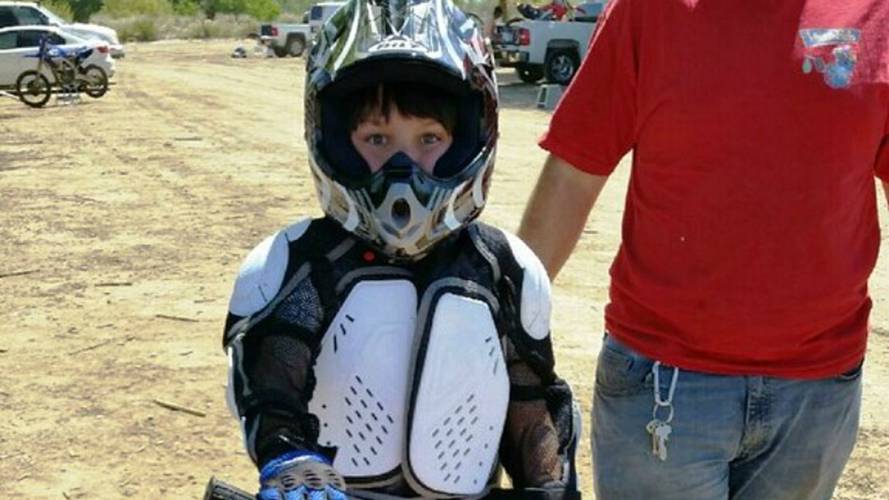 Passing the Torch — Teaching the Next Generation of RidersA few weekends ago the stars aligned between my schedule, my brother-in-law Oscar's...

A few weekends ago the stars aligned between my schedule, my brother-in-law Oscar's schedule (not his real name), and his super busy modern kid's schedule, and we were able to introduce him to dirt bike riding.

Since Christmas, I've been trying to find the time to spend the day out in the Inland Empire with my nephew, Shooter (not his real name), and the XL75 we gave him as a present. Shooter has two brothers—including a twin—and between the three them and his busy parents, it's hard to carve out a block of time to do stuff like this; but it's just as important as it is difficult. So in my most avuncular manner, I loaded up the bikes and headed over in my pickup truck.

I had found an old Honda XL75. It's pretty much an XR75 with lights and the ability to be street registered. It's also essentially the same bike still being made to this day as the XR80 or XR100. It was a little worse for wear and had sat for 10 years, but from the size of the BMX trophies at the yard sale I bought it at, it was well loved. It needed a seat cover, and the Chinese replacement carburetor that had been put on it was jetted all wrong, but otherwise it was sound and still strong enough to pull me around after a few hours of tinkering.

So on the Saturday in question, we loaded some bikes in the back (including the Huffy Thunder Road BMX that was to be my camera bike), some snacks in the cab, and all the gear. We set out for the Inland Empire, which is where L.A. County had all the dirt moved to many years ago. It was a fairly tight fit, and my truck is a stick shift, so it was a bit awkward, but this reminded me of riding in old trucks with my dad and grandfather. At least my truck has three seatbelts...

You could see the mixture of excitement and terror that accompanies a new adventure like this in Shooter's face. He's already good at riding a bicycle, and he was comfortable mowing the lawn and driving a go-cart, so he wasn't scared of machines. This should be easy. Right?

Yes, this was shot with my on helmet potato cam

But the interplay of the throttle, clutch, and brakes of a motorcycle can be tough to master (some people who have ridden on the street can still hardly do it). Many kid's minibikes have an auto clutch for this reason, and some don't even have gears, but then there is that awkward transition later learning to ride all over again on a real bike. As you can see, Shooter is perfectly sized for this bike. You can't see, but I'll tell you, he is a smart eight-year-old with an understanding of tech stuff, and he quickly learned what controls what, though not exactly when and where to use them. This short video was only about the fourth time he had taken off without stalling the bike.

There was an unfortunate tank slapper at walking speeds shortly afterwards, which scared him more than anything else, so we stopped for lunch. A short break was all he needed before getting back up and on the bike, and we convinced him he ought to try to do at least a lap of the entry level minibike track. It took a few more go-rounds of the parking area, and the addition of some adult sized elbow pads as knee guards, but we did convince him to try it. Mind you, he still didn't know how to shift into second gear, so he had a top speed about that of the Huffy I was on, but he did give me a run for my money. But he wouldn't go on the actual track. He would only ride the flat path around the outside of the track surface, because he was scared of the jumps (hardly) and berms, but he was a trooper.

It should be mentioned, and I made sure to tell Shooter this, that my first experience controlling a motor vehicle ended with me driving a go-cart which my father had built, out of control, over a curb, into the woods and down in a ditch before anyone could stop me. Shooter is about 500% better than I was at this age already. Though he expressed trepidation at going faster and over the jumps, he never quit. As we were leaving he was already asking when we could come back.