7 Reasons Why I Love and Hate the McLaren 650S Spider 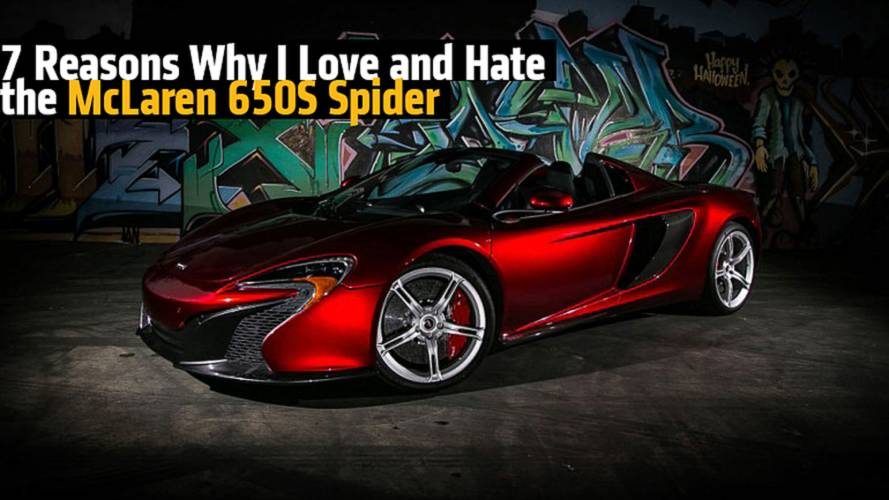 7 Reasons Why I Love and Hate the McLaren 650S SpiderI always imagined that my first supercar experience would be in a suitably exotic location, like...

I always imagined that my first supercar experience would be in a suitably exotic location, like the south of France or Italy’s Stelvio Pass. Instead, I’m using one as a daily commuter. Not that I’m complaining. Said ride is the new McLaren 650S Spider and – given that the accompanying loan agreement threatened to end my entire bloodline if I so much as scratch the thing – it’s probably best I take things easy.

Unfortunately, for purposes of a car review, these limits make things challenging as the most exciting thing I did was drive to Wahoo’s Fish Taco. Not all is lost, though – I got to live with this car for a few days in the real world. So while I can’t tell you how the McLaren runs through, say, the Corkscrew, I can tell you what it’s like to live with on a day-to-day basis. Here are my thoughts distilled into bite-sized chunks. Imagine numbers in front of everything and you’ll get a listicle – and you won’t believe what happens next! Or don’t. It’s up to you.

This should go without saying there’s just something about a supercar – any supercar – that gets heads turning. Pulling up anywhere in the Volcano Orange, drop-top McLaren makes me feel like a goddamn hero. Suddenly I’m everyone’s best friend. Around the office, everyone now calls me “the guy with the McLaren,” which is much better than my old nickname, “that one guy with the hat.”

But not always the “right” kind of attention

I had heard stories of women throwing themselves at guys with blatantly expensive rides, and I was hoping to experience a little bit of that for myself. No dice. Again, that’s probably for the best as I’m still married. And when my wife saw the car, she simply shrugged her shoulders and asked what was for dinner.

As for the attention the McLaren 650S Spider does attract, it’s all dudes, and they all ask the same questions, namely “how much is it?” and “how fast does it go?” And it’s constant – there’s always a line of people wanting to talk about the car, and even if 10 people hear the same question and answer at the same time, someone will ask it again hoping I have a special, secret answer just for them.

What’s most surprising, however, is others’ sense of entitlement. Comments like “give me a ride” and “let me borrow the keys” are also a bit too common. While I’m always happy to share the joy of the McLaren with friends and family, those demanding time with the McLaren don’t even know my name.

It’s an easy car to drive…

Once you adjust to the push-button shifter – and get over the fear of driving a $350,000 car – it’s surprisingly easy to drive the McLaren 650S Spider. With the engine and suspension in “Street” mode, it’s surprisingly docile – sort of a mix between an F-Sport Lexus and a Subaru BRZ.

That’s not a slight against the car by any means. Other high-power cars tend to be a handful no matter the speed. The McLaren, though, finds the right balance of being easy to manage while still delivering on its promise of driving thrills. The ride is just firm enough, and the steering just direct enough, that even at 25 miles per hour you still get the sense that you’re driving something truly special.

But not too easy…

Easy or no, this is still a supercar, so you can’t get inside and expect to turn off your brain. This car has an immense amount of grip – especially up front – and when matched to the hyper-sensitive steering, it results in a car that tramlines everywhere. On smooth, perfect German roads, this is a non-issue, but over the broken roads of Los Angeles, it can be a pain. Over one particularly nasty section in downtown LA, for example, the steering wheel decided to suddenly take on a life of its own, prompting me to get out of the car to make sure I didn’t break the suspension.

The McLaren 650S Spider is also incredibly low. Driveways, speed bumps and errant leaves all need to be handled with great care, and at great angles, to avoid scraping. A hydraulic front lift is an available option, but not equipped to my loaner. Hopefully that bloodline-ending clause doesn’t extend to the undercarriage, otherwise I’ll be executed Judge Dredd-style as soon as this is published. If you’re reading this, please send someone to look after my cat, just in case.

I’ve driven some incredibly fast cars before, but nothing quite matches the power of the McLaren. With its 3.8-liter twin-turbo V8 pushing out 650 PS, it takes less than 3 seconds to hit 60 mph and can run all the way up to 204 mph – with the top down, no less. While LA roads don’t offer any opportunities to explore that upper limit of speed, you can bet I’m repeatedly “testing” out those 0-60 times.

The thing is, the 650S Spider accelerates at speeds faster than my brain can process. There’s no increase in speed to experience here – hit the throttle, tunnel vision ensues, and before I can blink I'm getting pulled over for breaking triple digits in a school zone. Luckily, the police just tend to ask “how much is it?” and “how fast does it go?” and then let me go about my day.

Unfortunately, it’s still haunted by the ghost of British electrics past.

No doubt the McLaren 650S Spider is an engineering marvel. Each and every component was meticulously designed to extract the maximum amount of performance. An active suspension is used in place of sway bars to save weight. The door hinges, despite their dramatic “up-swinging” motion, are lighter than traditional ones. Even the bulkhead – hidden under the dash – features a de-bossed logo versus a more cost-efficient embossed logo, simply because it helped the engineers save half a gram.

Despite this incredible level of engineering, the McLaren is still plagued with what we Yanks call “British electrics.” If that term is lost on you, go Google Lucas electrics for a few minutes and then come back to us.

All caught up? Good. Let’s start with the automatic roof. McLaren spent a considerable amount of effort dropping its weight to a scant 40kg, and it takes just 17 seconds to artfully retract just aft of the seats. Well, when it wants to cooperate, that is. The roof doesn’t always want to respond to commands, and I either have to play with the switch for a minute or two, or just shut the car off and turn it on again to get things back to normal.

And the rear air brake, while undoubtedly cool, issued a not-at-all worrying “Air Brake Broken – take to McLaren Service Center Immediately” message as soon as it started to lightly drizzle. This message disappeared immediately, however, when I fired it up the next, rain-free morning.

At the end of the day, though, the McLaren 650S Spider is a surprisingly practical machine. It’s got dual-zone climate control, sat nav and an honest-to-god entertainment system. It’s even got a surprisingly usable “frunk” – it’s not huge, but it could carry fully loaded Trader Joe’s bag or two. And it’s because of that, despite its flaws, that I think the McLaren 650S Spider is an almost-perfect car. It offers all the drama and performance one could ever want in a supercar – without the soul-shattering disappointment of, say, the Countach – in a package as user- and driver-friendly as a Miata.

Just give it an optional easy-to-read exterior graphics package showing the MSRP and top speed, and it would be flawless.