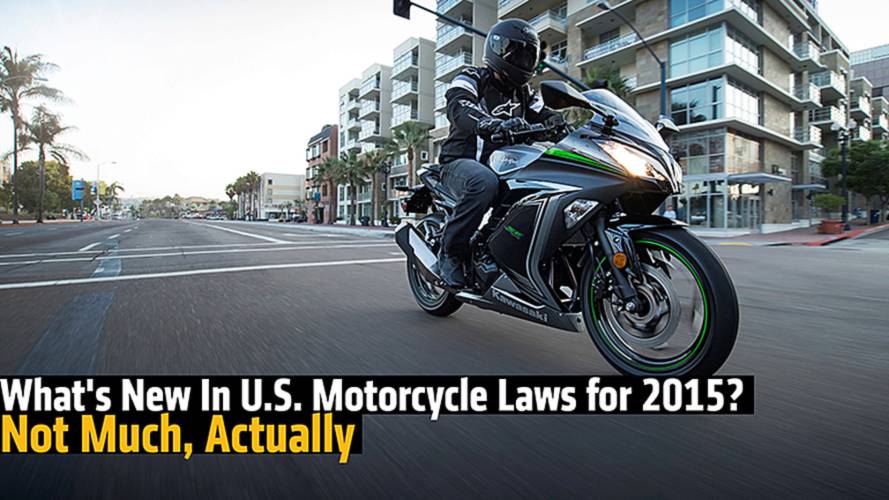 We take a look at upcoming motorcycle laws for 2015, and let you know what to expect.

A few days ago, we got our hands on a copy of the 2014 State Motorcycle and ATV Legislation Report. This report is released annually by the Motorcycle Industry Council, a non-profit trade organization that acts to represent manufacturers and distributors of motorcycles, scooters, mopeds (yes, people still build and buy those) and ATVs here in the States. Here's a rundown of what you need to know for the motorcycle laws of 2015.

A review of the report is highly recommended if you’re looking for a drug-free way to help you fall asleep. The content itself isn’t very interesting or revealing – I did learn that you can now buy ATV’s in Missouri on Sundays, which apparently was not something you were allowed to do – but the big picture it paints is worth thinking about.

The words FAILED TO PASS appear early and often. In fact, very few new laws that directly impact riders were passed in 2014. Is this a good thing? That probably depends on your political leanings, but it’s safe to say that most of us would rather not have to worry about getting a ticket for violating some new motorcycle law passed by a group of legislators who don’t know a swingarm from a center stand. (Indiana riders who decide to roll through that red light that hasn’t changed for a couple of minutes because your bike wasn’t heavy enough to trip the sensor, rejoice: that state’s “dead red” law passed, so you won’t get a ticket for doing so.)

READ MORE: Watson on Mandatory Helmet Laws Across The U.S.

On the flip side, state governments should be looking out for motorcyclists, whether they be veterans with thousands of miles under their seats or noobs who are looking to join the swelling ranks of riders. And here’s where legislative inaction becomes a problem. Massachusetts is a good example of a state that on paper did very little to make it safer to be a rider – seven bills that might have benefitted riders directly, from the establishment of a state Motorcycle Safety fund to increasing penalties for drivers who commit hit-and runs, failed to pass.

A bill in New York that would have required motorcycle safety awareness to be taught in approved driver’s ed courses failed to pass (Michigan, meanwhile, did pass such a bill).

Fortunately, California did not approve funding for this police bike in 2014.

We all know that laws alone don’t and probably never will make the roads safer for motorcyclists. In most ways, motorcycle safety begins and ends with the person in the saddle. Two-wheeled motorized vehicles are, by their very nature, dangerous and those who ride them assume risks that car drivers do not. But as more and more people give up four wheels for two, there needs to be more effort on behalf of riders by state legislatures. Things that seem small, like requiring drivers to know at least something about the motorcycles that they so often slam into, may end up saving lives.

Lead photo and above photo courtesy of Kawasaki media.