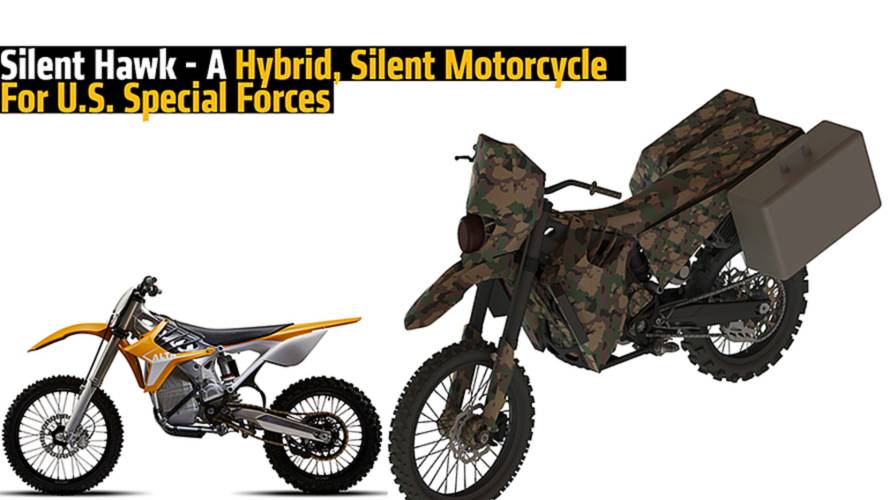 The Silent Hawk is a stealth motorcycle that sounds like something out of a movie.

Motorcycles have had a long and proud history with the U.S. military, dating back to the First World War. Now comes word that a new bike may be entering into military service, to be ridden by Special Forces operators. It's called the Silent Hawk.

Before we go further, let us take a look at what the Silent Hawk is not. It is not this:

And it is certainly not this:

In April of 2014, defense technology firm Logos Technologies received a grant from DARPA (the Defense Advanced Research Projects Agency - you know, the group that your conspiracy theory-loving uncle claims is cloning supersoldiers and building stealth fighters out of crashed UFO parts) to develop, what Logos calls a "military-use hybrid electric motorcycle with near-silent capability." They've been working on the project with American builder Alta Motors (formerly BRD, a company whose RedShift SM bike RideApart profiled a few years back; you can read about the ride in the link below). This week the Logos-Alta team received a second round of funding from DARPA, further pulling the project out of the Blue Sky stage and into reality.

READ MORE: Riding the BRD RedShift SM on The Snake

The bike will apparently be built from the RedShift platform, but will use a hybrid engine developed by Logos. That engine, according to Logos Technologies (in a recent article in the U.K.'s Daily Mail), will produce a mere 75 decibels of sound at its loudest - about as loud as a vacuum cleaner. The engine will also allow the bike to travel 55 mph for sustained periods.

The Alta RedShift MX, basis for the Silent Hawk.

The bike's light weight, speed, presumed range and quiet engine make it perfect for Special Forces' use. Logos believes (as Chuck Norris did) that such bikes would enable small teams to quickly and stealthily move across rugged terrain. The bikes would be outfitted with panniers to further extend mission capability and duration, as the concept art below shows.

We don't see any missile launchers or wings, but this is just concept art, so those COULD happen!

The Logos-Alta team is on an ambitious schedule; Phase II testing is slated to wrap up in 18 months, during which time an operational prototype will be built and put to trials. With the military's focus on so-called "low intensity conflicts" - with typically involve precision operations against non-state enemies (think ISIS and the Taliban) - it's not surprising that the government is looking for new ways to transport the soldiers that are doing much of the fighting. We'll keep you posted on the Silent Hawk as the bike develops.