Racing Against Your Teammate or With Him - The Trouble with Teammates, Part 2 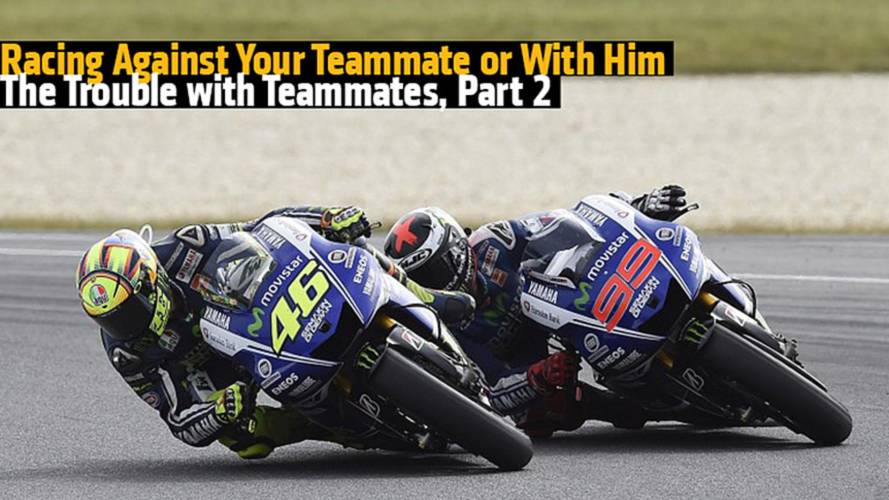 Part 2 of our exploration of the strange system of teammates in motorcycle racing, its risks and benefits, and what might be done about them.

Teammates are a part of modern racing as familiar as checkered flags and champagne on the podiums. But they represent an odd system in what is, in reality, an individual sport. In Part 1, we discussed the illustrations of the impact of teammates from the 2014 season, from the perspective of the lead rider.

So what if you're the second rider? Things get decidedly more murky. You may start the season on equal footing with your teammate, but as the rounds wear on, you may find yourself with an underdeveloped bike, less optimal tire choices, and in the worst case, team orders instructing you where to finish. Or, as in the case of Dani Pedrosa, you may be continually paired with riders who are just a little better than you, spoiling your otherwise very good chances at a world title. No one disputes that Pedrosa is one of the few riders in Grand Prix racing capable of challenging for wins, but he has had the rotten luck of riding against teammates like Nicky Hayden, Casey Stoner and Marc Marquez, who together account for five of the last nine MotoGP championships.

Another case study of teammates in motorcycle racing can be found with the Yamaha MotoGP team. No one disputes that Colin Edwards, in his prime, was a rider capable of fighting for wins, but it is well known that he was seldom given equal equipment to Valentino Rossi, then Yamaha's only darling. True, Edwards was never going to be equal to Rossi, but we're left wondering how much closer he could have been. With the arrival of Jorge Lorenzo, Yamaha was forced to supply two more-or-less equal bikes, in an effort to develop a more balanced machine for the manufacturers' championship, as well as a bid to preserve their future as Rossi edged closer to retirement. But Rossi didn't take the insider competition well, and eventually took his ball and went to Ducati.

Pedrosa (26) chasing Marquez (93). As he has been chasing his teammate since he entered the series. (Photo courtesy Honda Racing Corporation.)

In the interim, Lorenzo was joined by Ben Spies, arguably the strongest American talent to hit the world stage since Rainey and Schwantz. Spies backed up his strong rookie performance with the satellite Tech 3 team by taking his first win and a few podiums in 2011 en route to a fifth place finish in the championship, only to have things fall apart, sometimes literally, in 2012. Spies' bikes suddenly became plagued with a variety of bizarre mechanical problems, including blown engines, defective brakes, and failed suspension linkages. The season, and the injuries he sustained from it, would eventually lead to Spies's premature retirement from the sport. How it was that Lorenzo, who would go on to win the championship that year, was supplied with bikes seemingly immune from the same sort of defects, has never been revealed by the few in the paddock who know. But the contrast in performance, though often no fault of Spies, surely contributed to his dismissal from the team.

One of the main theoretical advantages of a two-rider team is the development of the motorcycle. If two heads are better than one, then certainly the data and input of two riders over the course of a season will develop a superior machine. But that remains true only so long as the riders have similar enough riding styles. Otherwise, the input can be conflicting and sometimes counterproductive. This may have been one of the biggest problems plaguing Ducati's MotoGP program for the past several years, as the litany of riders (and riding styles) cycling through the team provided inconsistent feedback for the development of the bike. Then again, it didn't help that what feedback they did receive was often ignored by Ducati's engineers.

Years ago, it was explained to me in private conversation that the main factor in the disparity in performance between two factory riders in the AMA paddock was that the team had decided to follow the lead rider's direction with development and setup. This was a reasonable decision by the team, but the second rider had a much different style, and was never able to adapt to the bike as it evolved further away from his preferences. This may have been excuse-making, but there is a kernel of truth to it as well.

Lorenzo and Rossi celebrate on the podium at Motegi. Their relationship has not always been so rosy. (Photo courtesy Yamaha Racing.)

Most of the indisputable advantages of having two riders on a team have less to do with the riders or even the bikes, and more about the team itself. Two bikes circulating out on track provide twice the sponsor exposure; two riders can provide double the fan and industry engagement. Running a two-bike team allows you to take advantage of economies of scale, as manpower and resources can be used more effectively and costs can be spread. It allows you some degree of future-proofing, as you can hire a young rider to learn the ropes from your veteran rider, before the latter retires or begins to lose speed. It can even help mitigate disaster. If Ben Spies had been on a one-man team when his season (and bike) fell to pieces in 2012, the consequences for that team would have been far more dire. Likewise when Rossi broke his leg at Mugello in 2010.

When set up correctly, teammates can be an overwhelmingly positive proposition, as in the case of the Edwards/Spies pairing at Tech 3 Yamaha. But that situation seems to be the rare exception, rather than the rule. In trying to create a positive, effective team situation in racing, we are left with an almost impossible list of requirements. The riders should both be fast, but one needs to be just a bit faster than the other, so the second rider doesn't rob championship points from the first. Still, the second rider needs to be fast enough to help defend the first rider in a race. They should get along well, not so well that they won't push each other with a friendly rivalry, but well enough that they'll cooperate and help each other on track. They hopefully share a common language. Their riding styles should be similar, but not identical, so that the development of the bike can be approached with two different sets of data that point in the same direction. Imagine going to a large pound and trying to pick two dogs, of different breeds and ages, who you hope will grow to have the same personality and athletic potential, and you'll have a small idea of the conundrum facing team managers.

And what of that most odious of team functions, the team order? Preeminent MotoGP journalist David Emmett once questioned what the difference was between match fixing in team sports, and team orders in racing. It's not an easy question to answer, but it is one that merits consideration by fans and series organizers. One of the biggest controversies detracting from the legitimacy of Formula 1 is the prevalence of team orders. Motorcycle racing has proved far more resistant to such intervention (there are no radios, after all), but they do still happen. But what could be done to stop them? Overt pit board signals are one thing, but it's not as if there can be an enforceable rule against private conversations between team principals and riders before races.

In the end, we are probably stuck with the peculiarity of teammates in the individual sport of racing. While the arrangement only sometimes benefits the lead rider, and less often the second, the disadvantages of having no teammate at all are too great to be overlooked. Series organizers must take whatever measures are available to prevent teams from excessively interfering with races or taking over the series, such as limiting the number of riders per team, but outlawing them entirely would be foolish and detrimental to filling the grid on Sunday morning. So long as their influence is kept in check, the racing will maintain its semblance of legitimacy, and the intricacies of teammates in racing will continue to provide us with intrigue and drama for decades to come.