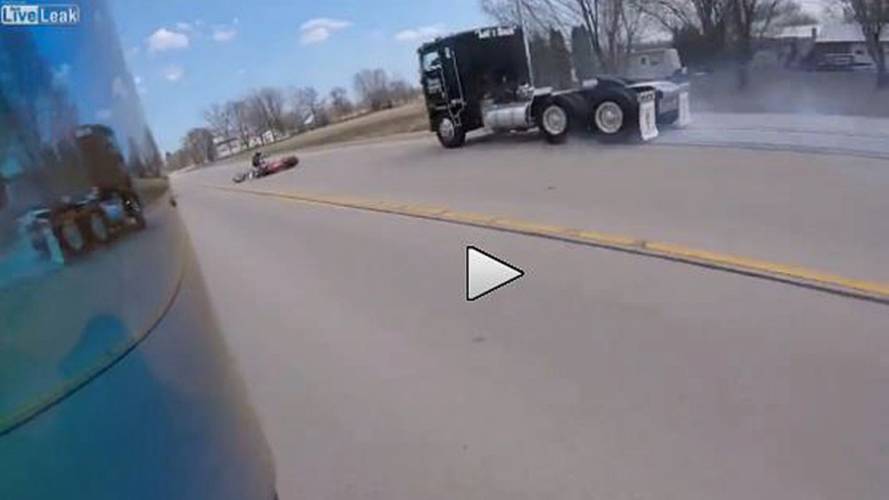 Bike v Dog + Giant Truck - Video of the DayA good friend and expert rider once said, "Everything is great, until it's not."  That bit of wisdom...

A good friend and expert rider once said, "Everything is great, until it's not."  That bit of wisdom applies to this video we found at liveleak.  In it, a group of riders cruises down a country road on a clear, beautiful day. Everything seems to be going great until a dog wanders out onto the road into the pack of riders.  The rider recording the video from his helmet cam misses the dog, but his friends following behind are not so fortunate.  Hitting an animal is bad news for us motorcyclists, but as you'll see in this video, things can get even worse very quickly.  Say for example a huge tractor trailer barreling up the road in the other direction.

Fortunately the fallen riders narrowly miss being flattened by the oncoming semi.  Thanks no doubt to the attentiveness and quick reflexes of the truck driver.

So, what is the takeaway from all this? Is there anything that the riders could have done differently?  The answer is, maybe.  A close re-watching of the video shows that the group was moving along at something north of 70 mph.  It's a safe bet that it is higher that the posted speed limit for a two lane rural highway.  If the riders were moving along at a speed closer to the speed limit, would things have gone differently.  It's impossible to know, but here's what we do know about reaction times and moving speed.

According to research and findings from Marc Green Phd about reaction time for drivers in cars:

Reaction times are greatly affected by whether the driver is alert to the need to brake. I've found it useful to divide alertness into three classes:

Assuming that the riders from the video fall into the third category of alertness from Dr Green's research, "surprise," let's for the sake of argument agree they their reaction time would be 1.5 seconds.  (I know we all think we would be better that that, and we probably would, but this is an exercise in speed vs. time and distance to make a decision)

Again it's impossible to know for certain if that 37 feet would have made a difference for the riders here in the video, but it is a good reminder that less speed allows more time and distance to deal and react to the unexpected crap that happens out there on the road.

Hypotheticals aside, here's what this group of riders was doing right: They were wearing proper gear for the road: Full face helmets,  gloves, leather riding jackets, denim jeans.  While I'm not aware of any gear that will guarantee survival against a tractor trailer barreling along at highway speed, having the right gear on will help you keep your skin on your body and not on the asphalt.

As a final thought, I did notice that the fallen rider at the end of the clip was wearing a sidearm.  Maybe they were in Arizona, or maybe he's a cop.  In any event as mad as they were about that unfortunate stray dog, it may have been a good thing the run-down pooch was nowhere to be found.  Otherwise this video could have had another ending entirely.

Here's another view of that same crash showing how close a call that encounter with the truck really was.

Learn more about Jim and the rest of RideApart's excellent staff here: The RideApart Team