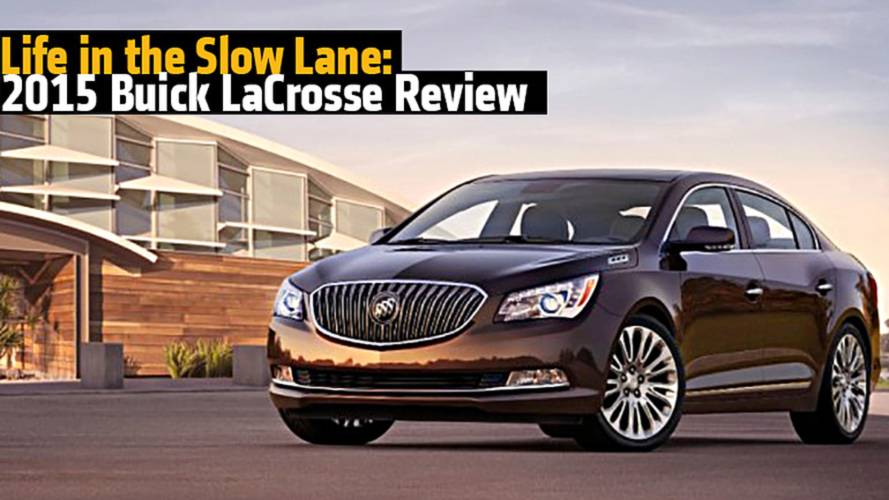 Can the 2015 Buick LaCrosse finally hang with the young, cool crowd? We put the renewed luxury saloon through its mettle.

I don't have children yet, but I know exactly what it feels to like to be a grandparent as I have the new Buick LaCrosse.

Needless to say, it was weird.

Please, pay no mind to those Buick TV spots trying to position the brand as a hipper, younger company – this is still a car for the blue pill, not the blue hair set. But that doesn't mean things are bad in geriatric-land though. In fact, it's refreshing to drive something comfortable and unchallenging for once.

I've seen press images of the LaCrosse that make it look sleek, badass even. In the metal though... not quite, not so much. The large and bulbous body with the traditional Buick styling “trademarks” (like the side portholes) makes it look a tad like afterthoughts.

The Atlantis Blue Metallic hue softens the edges, and while it's nice to see large 20-inch alloy wheels equipped on the car, their ovoid details, awkward offset and sizable fender gap help cement the idea that this car belongs to the “cool” grandpa hanging at the Taylor Swift concert with her granddaughter...not that there is anything wrong with that.

So while this LaCrosse may be far from edgy, it's an incredibly comfortable car – and that's what one wants and expects from a Buick after all.

Credit its Epsilon II underpinnings for doing such a fine job at comfort, and who's parts are shared with the excellent Cadillac XTS. The LaCrosse's 304-hp 3.5-liter V6 and 6-speed auto transmission do an admirable job getting the 3,900-lb beast to freeway speeds. No, it's not and will never be fast, but again, that's not the point. The LaCross has got some moxie, and more than enough grit to get you on the freeway and let you pass while at speed. You just do it while driving a moving sofa.

As for the drive, it's not the slow, disconnected experience found in some of the older, less hip Buicks, but you won't be inspired to push things when the roads get twisty. The brakes, on the other hand, lack an initial bite and feel like they will take forever to bring things to a halt, which works when you want to count every moment of your life.

Aggressive driving is a big no-go here, but again, for the typical Buick crowd – who are never in a rush to get anywhere – will find the whole setup more than adequate, they'll find it exhilarating.

The real story with this LaCrosse lies on the inside. GM (Buick included) has really stepped up its interior game over the past few years. The LaCrosse’s cabin delivers (and we don't mean this as a slam) a super solid entry-level luxury experience.

Seats and key interior touch points are wrapped in soft leather, and where plastics are used – and there's quite a bit – it feels solid and well put together. The genuine Tamo Ash wood trim is nicely done, and looks really cool at night with its TRON-inspired cool-blue backlighting. I gotta say, it's a cushy, quiet ride that started to win me over the more I drove it.

I'd say the LaCrosse offers 90 percent of the Cadillac experience at 70 percent the price, but that would be unfair to the Buick. Sure, the Cadillac features more in the way of high-grade, premium materials, but the Buick comes out slightly ahead simply because it isn't burdened with the complicated CUE infotainment system.

Instead, the LaCrosse gets the much-more intuitive IntelliLink system, which makes it a lot easier to use the satnav satellite radio, Bluetooth connectivity mobile, and 4G LTE hotspot. About the only Cadillac-esque controls are the solid touch-sensitive “buttons” for the climate control and heated seats. They are a lot easier to operate as well.

What’s unnerving though, is that I legitimately may now be in this car’s demographic. I took the LaCrosse to a punk rock show where the headlining band was playing its most famous album in its entirety. During a break between songs, the lead singer asked how many in the audience were over 40. A sea of hands went up (not mine as I still have a couple years to go), making me realize that I am now officially going to concerts by “old” bands in a vain attempt to relive my youth, and that depresses me to no end.

So while the LaCrosse sort of fails at being a sleek, sexy machine for the young and upwardly mobile, it excels at being a Buick. It's a solid, comfortable ride that offers a good amount of luxury at a reasonable price. It also makes me the most stylish man at my local Bingo night. Now if you’ll excuse me, I gotta go get ready. I've got an Taylor Swift show to catch with the grandkids.