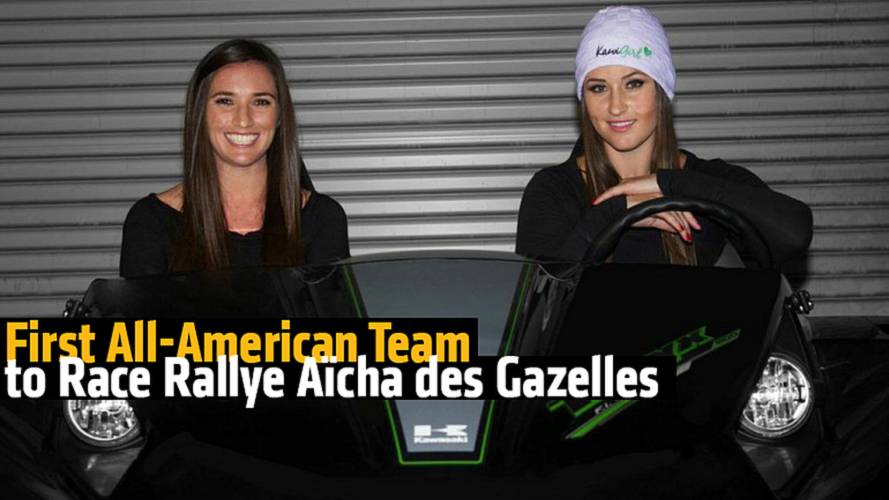 The first all American team to race the Rallye Aïcha des Gazelles.

Let's check out an amazing team of two riders that will be the first all American team entered in the prestigious Rallye Aïcha des Gazelles. This is one of the toughest events on the planet encompassing 9 days racing across Morocco in Africa.

What makes this event so tough? There are 160 teams that are tackling the terrain, the weather, each other, and mapping their own routes from point A to point B. Yes unlike the Dakar these racers have no GPS, no route guidance, no high tech directions. Left to make the race with maps and a compass. It's far more than a race it's about survival and testing the limits of your race craft and equipment. You win the stage by traversing the shortest distance between the two points.

The two driver team is supported by Team Kawasaki IMG Motorsports for this the 25ht running of the Rallye Aïcha des Gazelles. They will be running a Kawasaki Teryx Side x Side built by IMG Motorsports.

So by now you might be wondering who this team is. I didn't want to share it early and highlight the severity of the event. The big surprise, this 9 day event that runs no GPS, no route guidance and leaves you running with a compass and some old maps is an all female event.

Emily Miller is a former pro racer and one of the first Americans to participate in this race. She is mentoring Sara and Erica along with Kirsten Kuhn, who is the US Team/Media Liaison for the Rallye Aïcha des Gazelles. Sara and Erica have to overcome the challenges of a language barrier, an unvisited country, an unfamiliar desert, international competitors, and of course each other when dealing with diversity.

Sara Price previously raced for Kawasaki as a professional women's motocross racer making history in 2010 as the first ever female factory supported racer in motocross.  Sara has amassed 16 Amateur Championships on a Kawasaki during her amateur career as well as medaling in X-Games. Sara crossed over into the Side X Side racing in 2012, racing many different disciplines in a UTV and fast became a force to reckon with. She is also going to be the youngest American to race in the Rallye Aïcha des Gazelles’ 25-year history.

Erica Sacks has over 15 years of off-road racing experience. She has been all over Baja and has raced the longest race in the US, giving her the knowledge necessary to compete in this long race. She has raced in a variety of off-road cars from Trophy Karts to Class 1 cars, and has the experience and navigational skills required when racing in the most prestigous races held in Baja. She recently finished second place in a UTV at the 2014 Lake Elsinore Grand Prix.

"Racing in the Rallye Aïcha des Gazelles has been a dream of mine to test my skill and also have this experience of a lifetime. Having a long history working with Erica from on-the-track to in the garage, I feel we couldn't be a better team to do this. I'm very excited to be back with Kawasaki and have their support and can't wait to make America proud" commented Sara Price. Erica’s excited about this new partnership as well and commented, "When Sara came to me about being her teammate for the rally, I thought this is crazy, but what a fun experience! Sara and I have been friends for many years.  This last year I have been involved as her spotter in her UTV racing and working together with her on her UTV. I'm looking forward to taking our racing friendship to Morocco as team USA, Kawasaki, IMG Motorsports."

Team USA, Kawasaki, IMG Motorsports are asking for their fans be a part of this amazing, first-ever American race team at the Rallye Aïcha des Gazelles! A Crowd Funding Campaign has been started to help support this team at www.darkhorsepros.com/campaigns/88, where fans and supporters have the chance to come on board to join and support them in this amazing journey.

The team can also be followed on their journey, from training for the rally to daily updates in Morocco at www.facebook.com/TeryxGirls or use Official Hashtag #TeryxGirls on social media sites.

For More info on the Rallye Aïcha des Gazelles go to the Rally’s Official Site http://www.rallyeaichadesgazelles.com.