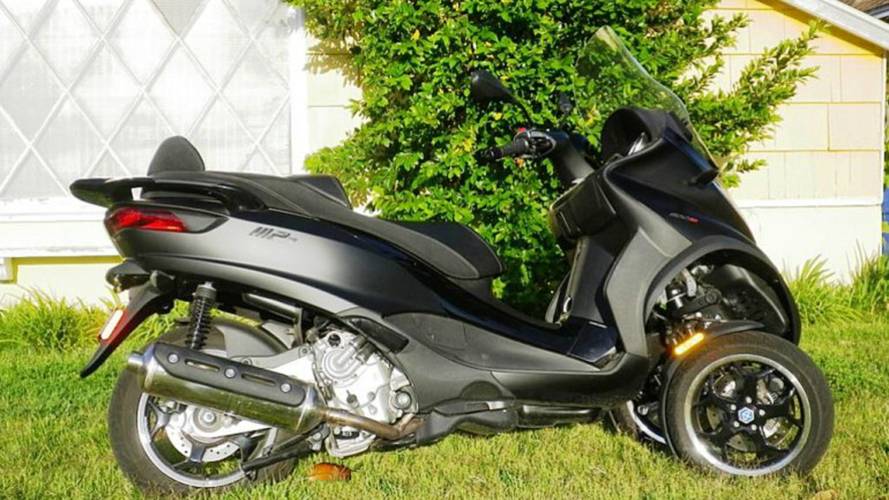 There's no getting around it. The Piaggio MP3 500 scooter is weird, but is it any good? Three-wheeled vehicles are a rare breed that are further divided into motorcycles with sidecars, three-wheeled cars (which you sit down in like the Slingshot), trikes (with two wheels in back like the Harley TriGlide), and reverse trikes (with two front wheels like the Can Am Spyder). Piaggio has come up with what may just be the first mass marketed leaning reverse trike, which steers like a motorcycle, but features increased stability and grip from three wheels.

I can try to explain how it works, but it is not an easy thing to visualize. The front wheels are on single-sided leading link arms, but are also connected together so as to stay parallel to each other, with a teeter totter sort of pivot somewhere behind the headlights. When you lean, you're pivoting there, and not actually around the scooter sized 13" wheels — it's as stable as a larger wheeled, longer wheelbase motorcycle. You can ask how and why, and you can try to wrap your brain around what it does...or you can just take it for a ride. Which is what I did, and almost immediately crashed it into a Ducati that was parked nearby.

If you're familiar with riding a motorcycle, there are a few things you need to relearn with the MP3. There is no clutch, and it has the typical scooter twist and go CVT transmission with automatic clutch. There is no kickstand (though there is a center stand), instead there is a switch that locks out the leaning ability, freezing it at the angle it currently sits. There is also a parking brake, which is manual and mechanical. And, lastly, the thing that looks like a clutch lever is the rear brake lever. Once you're familiar with all the new controls, riding it is just like a motorcycle, almost. Lock out the lean for parking and it automatically unlocks when you hit a certain speed. But then, it doesn't obey typical motorcycle steering inputs, until suddenly it does. The owner of that Ducati was not amused when I twisted the throttle and headed right for his bike. Thankfully, I was able to lean it away at the last second.

You aren't imagining things, that scooter is laughing at you

The quirks of this three-wheeled scoot bit me again later when parking. I neglected to lock the front end (or set the brake) and climbed off, only to have the scooter roll and fall over in the driveway. It seems to me that turning off the key ought to lock the leaning function automatically, but it doesn't and neither does setting the parking brake. Piaggio does try to warn you though, with numerous blinking and flashing lights, not to mention beeps and alarms. The dashboard often looks like the bridge of the Enterprise.

You get a nice size glove box with USB charging port up front too, but no MP3 player

So how does it ride? Pretty nice actually. The fuel injected 493cc single and CVT transmission deliver plenty of seamless power for freeway commuting, while returning more than 55 mpg. Once you stop thinking and learn to love the trike, it can be ridden exactly like a normal scooter, only without the tiny wheel darty instability you sometimes get at speed or on rough roads. It seems to take more effort to bend it into corners — and more effort to right it — or transition to an opposite lean than you would expect. But then, at over 500 lbs, it actually weighs a lot more than you would expect. I can report that I don't think I have ever ridden a bike or scooter more stable in the 40+ mph wind gusts we've been getting the past few weeks. So I guess that means the whole three-wheel idea works.

My wife, and Sir Mix-a-lot both approve of the ample rear seating accommodations

One of the greatest things about scooters is the commodious underseat storage, which this mega scooter certainly has. There is so much room that Piaggio's legal department felt the need to put a warning sticker inside that reads "No Pets." They also put a light inside so you can see to unpack, plus a 12 volt power plug and a gas charged cylinder to help raise the seat and hold it in place. You can fit a full face helmet inside, and probably two of the more commonly worn scooter type helmets. I doubt it's recommended, but I suspect you could fill it with ice and still have room for 12 cans of San Pellegrino soda. With it's shopping bag hook up front, luggage rack on the back, and underseat storage, I suspect it has a beer capacity approaching 36.

I'm personally too big for this scooter. My giant head sticking up over the windscreen, and my legs feel a bit cramped in the feet forward riding position. If you're 5'10" or less, you should be plenty comfy. And if you're so short your legs don't reach the ground, you can lock the lean upright when coming to a stop and never worry about balancing it in that position. The seat is wide and well padded, and the windshield will let you cruise at 80 mph without getting bugs in your teeth.

Overall, the MP3 500 is narrow enough to easily split the lanes of traffic on the freeway, and fast enough that you don't feel like you're going to get run down. If you do split lanes, and your local area uses reflective dots between the lanes, you're going to hit them with at least one wheel. It's unavoidable. The three-wheel (Brembo?) ABS disc brakes are actually too good, a claimed 20 percent shorter stopping distance than two-wheeled scooters. Stoppies are possible with the ABS turned off; I've seen the pictures, but you have a lot less to brace yourself against than on a bike, or in a car.

Overall, I enjoyed cruising, shopping, and commuting on the MP3 500, but I think I'm just a little too big for it. It was nice not having to plan ahead how you are going to get your groceries home, or take the car just because you have errands to run. People say that scooter riders ride in a bubble, where they think they are somehow safer than motorcycle riders, and I was totally feeling that with the MP3. But I would rather be leaned forward, aggressively avoiding trouble on a bike, than sitting back on a scooter and riding like I'd drive a car.

Speaking of big weird Italians, I asked my friend Lido for his opinion over a couple of gelatos, and you can look forward to that next week. I'm sure it will be colorful.

There is a lot going on under there, but just don't think about it

Does it commute? Yes. It has room for your briefcase, lunch, and gym bag under the seat.

Piaggio MP3 500 by the Numbers