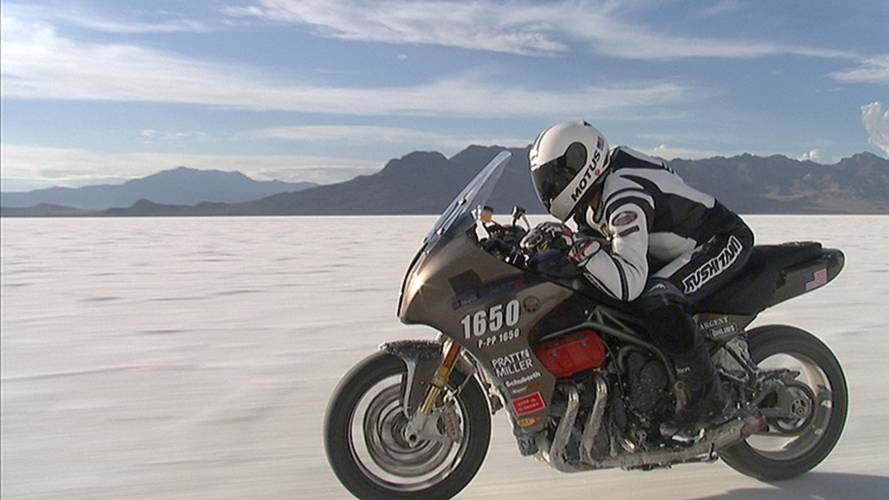 We Sit Down with President and Co-Founder Motus Motorcycles, Lee ConnLike many of you, we at RideApart had been anxiously awaiting the arrival of the...

Like many of you, we at RideApart had been anxiously awaiting the arrival of the stunning American V4 Sport Tourers from Motus. What's not to be excited about? The bikes have been shipped out to customers since Oct. 2014.

It's a comfy V4-powered sport tourer with a 100 percent American Pedigree, manufactured in the great state of Alabama. We've seen, touched, and heard (but not ridden) both the MST and MST-R versions and definitely like what we see.

We recently had the opportunity to corral Lee Conn, President and Co-Founder at Motus, and asked him a few questions that have long been on our minds. Here's some of what he had to say.

RideApart: It’s reasonable to assume that your own personal riding experiences would impact the product decisions made during the course of Motus' development. Can you tell us a bit about your own riding history?

But, it isn’t all about the bikes, it’s about the ride. We live in Birmingham, at the very tail of the Appalachians, and love to ride up into the mountains for a few days (with or without our wives). At this point in our lives, we like to go fast, but we also like to go far. That’s why we built the MST’s that are comfortable sportbikes with accommodations for touring. They’re great on the unavoidable highway stretches, but really shine in the twisties.

RA: Early on, did you do substantial market research? If so, would it be possible to share what you know about the typical Motus purchase intender?

A: Since the start, we’ve had a clear vision of what our motorcycles are, but yes, we’ve kept learning all along the way, including a recent comprehensive poll of fans considering the purchase of a Motus. Early on, research helped confirm we were on track with the concept and helped dial in the optimal feature set—things like wheelbase, engine configuration, fuel tank size, wet weight, etc. Later research helped us understand our customers better in terms of their other hobbies, what they ride, drive, overall demographics, etc.

RA: For a couple of years now, the motorcycle journalist community has held up bikes like the BMW K1600GT, Triumph Trophy, and Yamaha FJR as benchmarks in the sport tourer community. What competitive products did you utilize as key benchmarks during the Motus Development process? Why?

A: While we benchmarked certain performance characteristics and specs of many bikes, we mostly focused on building the best possible machine for the kind of riding we love to do. We studied bikes considered to be the most comfortable, most sporty, etc., but in the end, the Motus was designed to be crazy fun from 20-90mph and comfortable for long days of riding. Almost as important, we wanted our bikes to have a specific, unique character that is simultaneously badass and refined. A real hot rod, but comfortable and practical.

RA: Tourers and sport tourers are often quite heavily outfitted with accessories. Have you actively worked with any aftermarket firms to facilitate the fitment of popular after-sale “farkles” like windscreens, luggage, seats, exhaust systems, etc.?

A: Great question. I’ve spent plenty of cash over the years fixing annoyances with mass-produced bikes, so this is near and dear to me. Why not just design, engineer and equip build bikes with components that are not intended to be replaced immediately? Seems really wasteful to throw out parts when the manufacturer could have just offered a better product from the factory.

At Motus, we don’t cut corners to save every penny. We engineer and build the best possible components to make the riding and ownership experience the best it can be. So, yeah, we’ve worked closely on the front end of the design/engineering cycles with great companies like Sargent, Akropovic, Helibars, National Cycle, BST, OZ Racing, etc. Using the finest components makes our bikes more expensive, but when we can really discuss the value and attention to detail we are adding with this approach, most riders “get it.”

RA: Because we all know that it can take literally years to bring products to market, are you currently looking at future Motus variants that could possibly appear in the marketplace three, four, or five years from now? Perhaps a “naked” version or a pure sportbike?

A: We cannot confirm, nor deny other ongoing projects, but for now, we are focused on building comfortable American sportbikes.

Dyno testing before Lee's run at Bonnieville in 2014.

RA: As you move close to production, perhaps one thing that will be on the mind of buyers is insurance. Have you been in contact with the insurance industry or any of the leading motorcycle insurers like Progressive, Foremost, or Geico regarding rating classifications or rates?

A: Yes. Motus can be insured by any major Motorcycle insurer. Dairyland Cycle Insurance has also approved Motus, and we’ll get approved by the other insurers prior to motorcycles shipping to the public. It’s a relatively simple process.

RA:  Motorcycle warranties seem to be all over the map. The Japanese offerings are most often one year, Triumph and others are two, and BMW is three years or 36,000 miles. Can you share what you anticipate for Motus Warranty Coverage?

A: It's not anticipated. All Motus motorcycles come with a 24 month, unlimited mile warranty.

RA: You’ve recently spent literally thousands of miles in the saddle while riding the Motus production validation units from coast to coast. In that time, I’m sure you’ve developed some very strong feelings about the bike. When potential customers finally get the opportunity to ride a Motus for the first time, what is the one thing that you anticipate will most “surprise and delight” them?

A: People comment on how satisfying a Motus is to ride. On the street, many high performance bikes can be more frustrating than fun, with power that is not really accessible on typical roads. We’ve worked hard to make the Motus excel for its intended use and from 20-90mph, there isn’t much around like it.

As you can see from Lee's thoughtful answers, the gang at Motus have a clear vision of the bike they have brought  to the market and are currently focused on that singular task. Lee's  a real rider who has surrounded himself with a team of like-minded individuals, and we all look forward to the time (hopefully in the next few months) when we can see, ride, and purchase production versions of the MST and MST-R.

Hats off to Motus for all their hard work in bringing this mega cool product to the streets of the USA. Stay tuned! When there are further developments, we'll be prepared to immediately share.