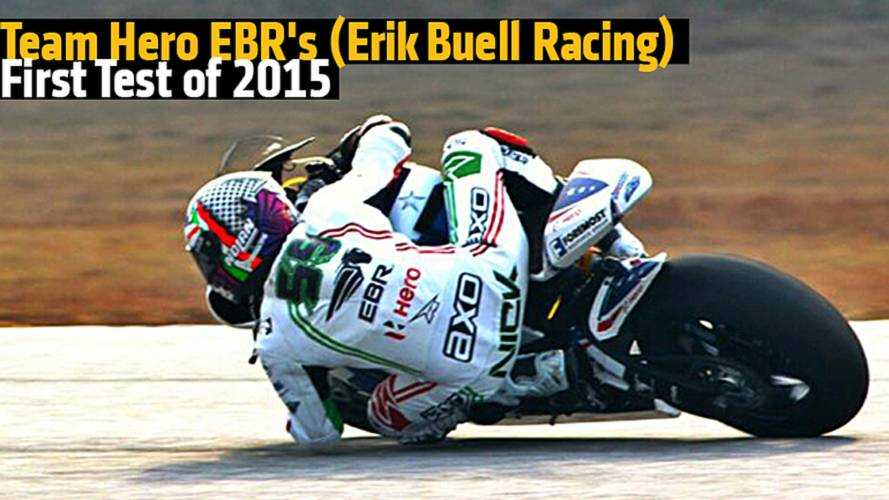 Team Hero EBR enters 2015 strong with a successful testing session, despite less than ideal conditions. Is this an omen of what the year will bring?

In an email titled "Positive Steps, Despite Conditions," the Hero Motorcycles/EBR Racing race team tells of good progress with the team's first testing session of 2015.

You may recognize the name Buell, as Erik was building sport bikes in a partnership with Harley-Davidson using their air-cooled power plants. Erik's been back since leaving H-D, building unique and powerful sport bikes and naked bikes, along with their return to World Superbike racing.

Their primary sponsor is the New Delhi, India based Hero MotoCorp, the largest volume manufacturer of two-wheelers in terms of units sold in a calendar year by a single company.

Team Hero EBR headed to Autodromo do Algarve in Portimao, and "left Portugal in a very positive frame of mind." Poor weather messed up testing, but the team was still able to get in at least 44 laps. The team will test again in Jerez, before the first race of the 2015 season on February 22nd at Phillip Island, Australia.

Although the weather was very mixed, the team was able to make significant progress, and are now looking forward to continuing their good work in the next tests in Jerez.

“A lot of guys told me that Portimao is a very difficult track and it is definitely the hardest track I have ever been to. So for me, it was mostly about learning the track and putting in the laps. We made many changes to the electronics, but hardly touched the tires or set-up at all. I was happy with what we did but wish we had another day on track.

“We ended up getting almost a whole day of testing in over the two days. As I was learning the track and getting used to all the different changes of elevation and blind approaches to corners, I didn’t really bother about my lap times.

“I am really happy that Niccolo did so well, especially as he managed almost the same time as he did on his bike from last year. We are at a proper European track and he is doing the same speed, so I am happy.”

READ MORE:  3 of the Best MotoGP Races You Should Attend Before You Die - RideApart

“Because of the variable weather conditions we did 44-laps, which is not that bad, but I would have liked to have done more. Over the two days we worked very hard and changed the bike a lot and I am very happy about the progress we made. I think my lap times were good compared to the other riders and also compared to last year’s time - both mine and last year’s bike.

“The team is working really well together and we are all going in the right direction. The EBR has to be ridden differently to a Ducati, but every time I go out, I know I am improving my understanding of the bike. The technicians, suspension engineer and I are learning how to set-it up in the best way to find the perfect feeling. I think we are all doing a good job and I am excited about the possibilities for our next test.”