LiveMap – The Next Big Hi-Tech Helmet? 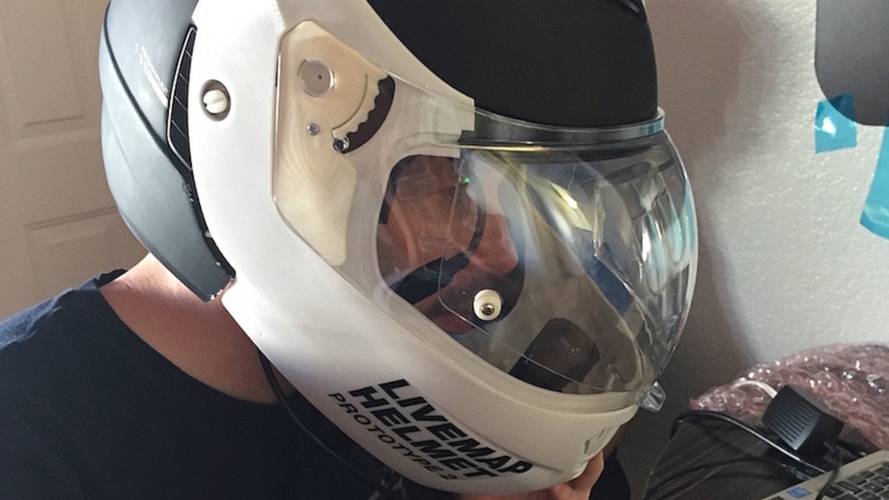 LiveMap – The Next Big Hi-Tech Helmet?Following my recent first impressions article on the SKULLY AR-1, I was contacted by Andrew Artishchev, founder...

Following my recent first impressions article on the SKULLY AR-1, I was contacted by Andrew Artishchev, founder and CEO of Livemap helmets. He wanted to show me a second prototype of the Livemap helmet, and I was keen on seeing it so I agreed to meet with him. His idea is quite complex, yet bold and innovative. Livemap is a smart helmet that has a HUD that displays navigation and features voice command capabilities, as well as the ability to record and stream video.

I’m sure a lot of you have heard of LiveMap; we’ve covered it in the past here on RideApart. Perhaps to some it’s an exhausting topic and/or product. However, Artishchev is adamant to have moto journalists get their hands on it (well, the prototype at least) to show the moto community that his project/product is coming along, with hopes of seeing motorcyclists wearing the LiveMap helmet early next year.

It’s clearly an exciting time for moto gear technology, and I'm all in.

Artishchev came up with the LiveMap concept in 2008. He was able to obtain obtain a quarter of a million dollar grant from the Russian Ministry of Science in 2014, and to date, he spent a total of million to develop two LiveMap prototypes.

The initial design for the helmet was based on the helmets that fighter pilot's use. It had a projector to display the HUD image onto the actual visor screen — positioned on the top of the helmet — but Artishchev felt it wouldn't pass safety testing. So the new design will have the projector (which will be much smaller than what he showed me) living near the chin, which he claims is where the helmet receives the least amount of impact during a crash.

The main purpose of the LiveMap HUD is to provide safe navigation. The HUD will display a map that's generated from Navtech, which is Artishchev's preferred source for route information. The HUD will also provide images in full color, and unlike some HUDs, the image is bright enough not to be affected by ambient light.

To reiterate: This is a prototype, which was hooked up to Andrew's laptop in order to function. All the parts used as well as the HUD imagery will be refined once the helmet is produced.

I tried on the prototype helmet. Immediately, it was interesting to see something projected right on the visor, but I was a bit concerned about visibility. Artishchev assured me that the image will not impede the motorcyclist's views as it only covers an approximately 20 degrees of vision. He also mentioned that the helmet will have all the proper safety ratings (i.e, DOT, ECE, etc.).

Artishchev said that visibility isn't an issue at all.

As mentioned earlier, the final version of the LiveMap helmet will have a camera built-in to specifically record and stream live video onto sites such as YouTube, Periscope, etc. To me, this is actually a very desirable feature. I currently see plenty of motorists riding with GoPros strapped to their helmet, and integration of that sort of video technology could be a vast improvement.

So what will power all of the features this helmet claims to deliver? Artishchev plans to equip the helmet with a 64bit arm processor chip with LTE advanced processing (similar to a cellphone like the Galaxy S6). It's also standalone, so the LiveMap helmet wouldn't need to be paired with a cell phone.

When it comes to battery life, it will hold power for roughly four to six hours. As for the final look, Artishchev said LiveMap will be a modular helmet made of carbon fiber materials to ensure a lightweight wear.

I asked Artishchev when we will actually see a finished product and he said he plans to have the third a final prototype completed by the end of this summer. From there he will complete the industrial design and have the first production of the LiveMap helmet by the middle of December. The goal is to have helmets on customers' heads by spring 2017.

As for actually manufacturing the LiveMap helmet, Artishchev isn't going to do it himself. He has been in talks with helmet manufacturers (he didn't tell me whom specifically) to help him produce the LiveMap. This will hopefully help expedite production.

As for price, it comes in at $2,000, which can be a hefty price tag. But if he delivers 100 percent of what he said the helmet will do, then I feel like this isn't unreasonable — at least at first.

I think LiveMap is a really cool concept. As you can see in the pictures, the second prototype left a lot to be desired aesthetically, but the final LiveMap helmet will most likely look more refined. As I mentioned earlier, I think the addition of a built-in camera that can live stream video will be incredibly useful. It's something that Russia currently adopts in their cars now, so extending it to motorcyclists is great. To have crystal clear navigation and voice commands right there with you would really make LiveMap a top contender in the smart helmet category. Only time will tell...

Learn more about LiveMap, check out the following links:

What do you think about the LiveMap helmet? Tell us your thoughts in the comments section below.