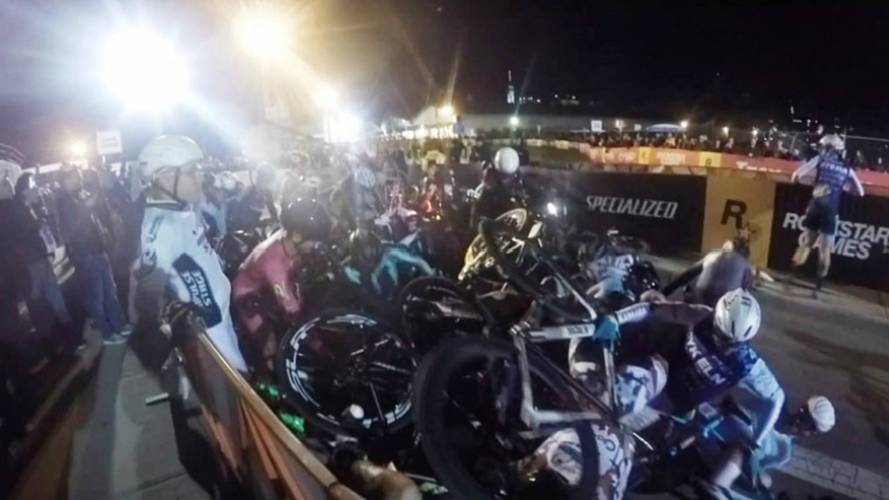 Motorcycle Stall Causes Huge Bicycle Accident — Video of the DaySeven bicyclists were injured, but none seriously, I feel like I need to get that out...

Seven bicyclists were injured, but none seriously, I feel like I need to get that out of the way first.

You've all seen motorcycles at the front of the Tour de France and every marathon, pacing the leaders and also carrying a camera person occasionally. Perhaps you've even been envious of them? Things did not go as planned at the annual Red Hook Criterium in Brooklyn, New York. This 5k race, for fixed gear bikes, attracts a lot of bike messengers and has a reputation for being a bit rough, but this motorcycle induced pileup was the worst they had ever seen.

Some people may not think I'm treating this subject seriously enough, but I am taking my cue from bicycling sites. HuffPo, the NewYoPo, and other general interest sites are taking the "Oh, the Humanity!" route, but the cycling sites are not. After all, here is a picture from 2014 when the riders in Red Hook did not have a motorcycle to run into.

So, lets talk about this poor traumatized motorcyclist. Online speculation is that the side stand was down, and when he put it into 1st gear the safety interlock killed the motor. Certainly possible, and I'm sure we have all done something just as dumb when our head was not 100% on riding, due to something like the excitement of a new bike, or a first date, or leading a bicycle race. This being 2016, and a public event, his shame will live on in infamy, from dozens of angles.

In the video above, you get some clue as to what bike it is from the twin under seat exhausts. Or this one, where you get a sense of the dread the rider surely felt at this royal screw up.

That also gives you the best view of the bike I've found anywhere. But I still can't tell exactly what it is. Ducati? Suzuki? Here is a still of it.