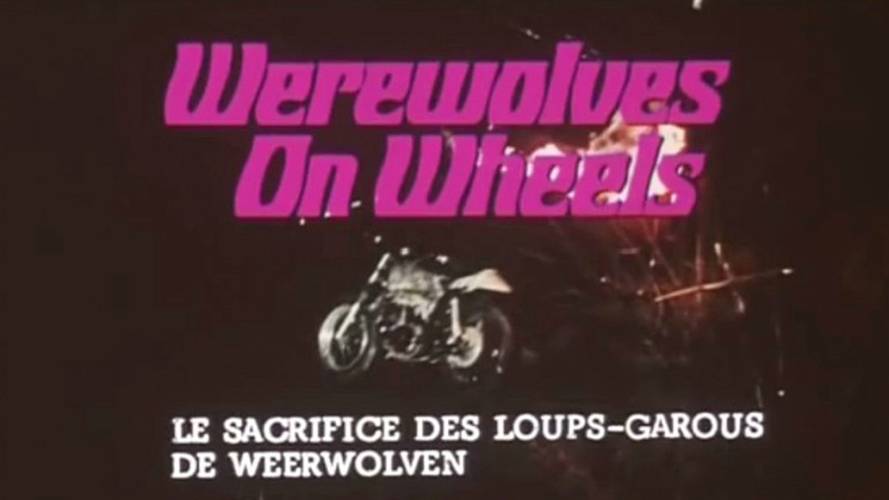 Werewolves on Wheels (1971) - Moto Movie ReviewThis week we have another classic biker movie that has depreciated so far that it is available on...

This week we have another classic biker movie that has depreciated so far that it is available on YouTube in its entirety: Werewolves on Wheels (1971). It starts like your regular biker genre picture, but this time around the simple town folks they run across are not so simple. They are in fact Satanists, who curse the Devil's Advocates with lycanthropy!

This modern tribute poster art is by Corlen Kruger, but I can no longer find a web page for her

So the story begins with our biker gang; actually pretty convincing in this movie, drinking, smoking dope, partying, riding out, and generally having a good time, plus the occasional petty theft, assault, and sexual misconduct. While camped out in a rural area, near an old run down church, they meet some monks who offer them food and drink, and that is when things get strange.

Over the next few days it becomes apparent that something supernatural is still on their trail, as several members of the gang vanish, or are found mauled and dead. You'll just have to invest a little time if you want to find out who the werewolf or werewolves are, but don't worry, you do get to see one riding a motorcycle by the end of the film.

It should be noted that, unlike the last movie Hell's Bloody Devils (1970), there are no embarrassingly bad riders/actors in this movie. The bikers are convincing because they are, for the most part, a gang of bikers, except for the lead actor/actresses. Folk musician Barry McGuire is one of them, yet does not play or sing on screen, and this movie is far, far away from his latter day Christian folk music. Child star (Father Knows Best, The Day the Earth Stood Still), and former speedway motorcycle racer, Billy Gray is another. And rounding out the professionals in the gang is a face we've seen before as the bad guy back in MotorPsycho!, Stephen Oliver.

Rotten Tomato Rating: None, though it has a 27% favorable audience rating

RideApart Worth Watching: Wait for Halloween, but note there is some gratuitous nudity, and plenty of drug use, so not for the kids party.

Redeeming Quality: Well, as you can see above, the bikes are pretty neat, and accurate representations of late 1960s choppers. And, of course, there is the aforementioned nudity. Plus, if you are a fan of other old vehicles, the bikers' old ladies cruise around in a Dodge 4x4 M.A.S.H.-era military wagon of some sort, which is kind of neat.

Worth Noting: While the acting isn't that great, and the writing is lousy, the production is fairly competent from a direction and cinematography standpoint. Meaning? It is easy on the eyes, not that you would know from these stills.

If you are in the mood for bad werewolf transformation effects, and a mask that looks like Chewbacca with mange, you can watch it on YouTube, or right here.