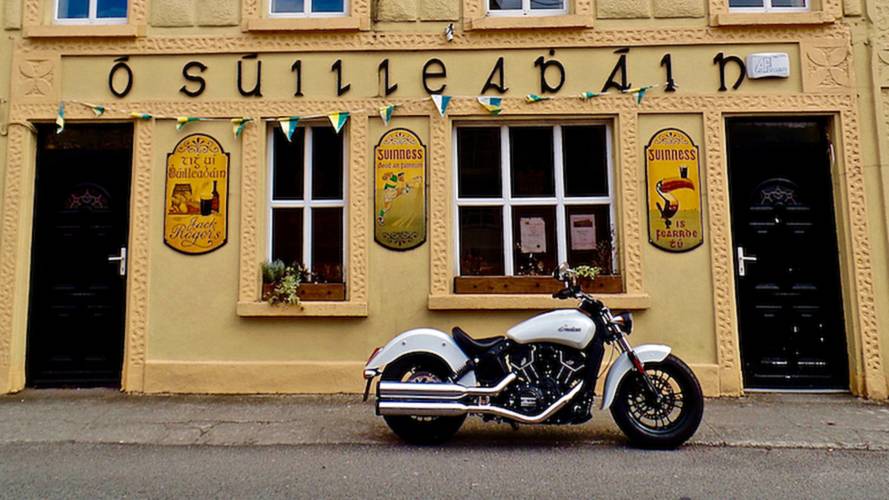 When, recently, several weeks of gentle pleading finally resulted in Indian Motorcycle handing me the keys to a Scout Sixty, I knew exactly where I wanted to go: Ireland.

That's probably not what you were thinking. After all, the Sixty is a motorcycle imbued with more than a century of American heritage, seemingly designed first and foremost for the American road. But, as with so many American things, if you trace its history back far enough you'll find an Irish beginning.

In this case, that beginning is Charles B. Franklin, an engineer and motorcycle racer born in Dublin in 1880. There's a plaque commemorating Franklin's achievements outside the house where he was born. And, because among those achievements are the designs of both the original Indian Scout and Scout 101, it made sense to ride the Sixty there.

My adventure starts, though, in Cardiff, Wales –– separated from Dublin by about 300 miles, roughly 80 of which are across the Irish Sea. I schedule a night ferry and set out to cross the breadth of Wales, which you probably didn't know is the birthplace of St. Patrick (yes, that St. Patrick).

For me, the whole trip will be like this: tiny connections within tiny connections. I learn of Prince's death just as I'm putting on my jacket to leave. Pointing the Sixty westward, I take certain pride in the fact that its modern liquid-cooled V-twin engine was designed in Minnesota.

The roads are empty; the best time to travel across Wales, it seems, is after 9pm on a Thursday. This means I can relax and keep the bike below 65 mph -- with no screen, that's where I'm happiest. The engine is capable of more (on another day I'll hit 105 mph) but going slow means not having to lean hard into the wind, not having to fight to hold on.

I've strapped a Kriega US10 bag to the triple tree and managed to secure an Oxford T50 Aqua rollbag to the fender, despite the lack of any bungee points. It's back-to-basics traveling. You know those hipster videos where some sexy tattooed person in a shirt that costs more than your monthly income straps a rolled Mexican blanket to the 'bars of a Sportster and takes six days to ride from San Diego to San Luis Obispo? That's how I feel: like someone cool.

No, that's not quite right. I feel legitimately cool. I like this vision of me. Everything feels right. The Sixty's engine is smooth and drones into the darkness. To my surprise, despite the fact I am 6'1 and the Sixty is mega-low, I am happy-comfortable.

I arrive at the port too early, pull a Thermos of tea from my bag and wait. After a while another motorcyclist shows up. He's just bought a BMW K1600GT in England and is taking it back to Ireland. Apparently he's saved a lot of money by buying it in the UK. We pass the time together trying to figure out what all the buttons and wheels and switches on his bike do. He delights in playing with the electronic suspension.

"Watch this, Chris," he says, making the bike go up and down. "Watch what she does."

I'm a big fan of techno whizzbangery, but the excessive amount of it on the K1600GT makes me appreciate the relative simplicity of the Sixty. Just turn the key and go.

Eventually, the handful of overnight travelers are allowed to board just before 2am. Four and a half hours later I roll off the boat at Rosslare with a lot more time to kill. Dublin is less than 100 miles away and the friend I'm staying with won't get home from work until 5 that evening.

The best course of action is to try to get lost. I adopt a tactic of approaching people and saying: "I'm trying to get to Dublin, but want to go by a really scenic route."

The Irish, though, know their country –– no wildly inaccurate suggestions are made. Not only do people give good directions, but offer suggestions of interesting things to see along the way. Even with tourist stops, though, I'm within The Pale by lunchtime, so I divert down into the Wicklow Mountains, the area that provides water for the Guinness brewery.

The narrow mountain roads here are of abysmal quality and too much for the Sixty's suspension. Fortunately, no one else is around. I slow to 10 mph and bounce along imagining I'm crossing the Himalayas. Every few miles I have to stop to re-secure the Oxford bag. There's something strangely fun about all this, but in hindsight I probably should have asked Indian to equip the bike with a rack.

This road was built by British soldiers in the early 1800s to allow them to hunt down Irish rebels. These days it connects a handful of charming towns, dotted by the odd pub or cafe in between. I stop to have tea and cake, and find myself in conversation with a 90-year-old woman who is baffled by Donald Trump. The Irish love to talk politics but her issue with him is a little less ideological.

"I can't understand how the hell any woman could go to bed with him," she says.

I found a town twinned with one from my home state. I can't imagine how that pairing ever took place.

A little more than a century ago, the British would have still been patrolling these mountains. Charles Franklin would have been selling Indian motorcycles in Dublin and racing the bikes at the Isle of Man. He competed in the famous road race every year from 1908 to 1914.

When World War I hit, a 33.3-percent tax on foreign luxury goods (such as motorcycles from America), designed to raise money for the British war effort, put him out of work. Franklin landed on his feet, though, earning a position within Indian's design team and setting sail for Massachusetts in late 1916.

On my second morning, I have a severe hangover and have lost my voice from shout-talking with friends in the pub. This happens every time I come to Dublin, but today it's a little worse because I hadn't realized that the lager of which I consumed seven pints was 7 percent. I'm less resilient than I used to be...

I don't get moving until mid-afternoon. Eventually, though, I am steady enough to ride into the heart of Dublin. Almost exactly 100 years after Franklin left the city I find his house and park the Sixty in front of it to take pictures. Perhaps things were quieter when he lived here, but these days the road is busy, so I'm drawing a crowd.

"Jaysus! I never knew," exclaims one man after I explain what I'm doing. "I walk by this house every day, an' I never knew dat. She's a beautiful machine, man. An' yer man who's responsible was from right here. Dat's amazin'!"

As I take pictures he takes it upon himself to tell every passerby the story of Charles Franklin, which grows more elaborate with each telling. At one point, an open-top tourist bus is stopped in traffic and he's shouts up at them: "Do ye see diss gorgeous machine here? Diss amazin' American motorcycle here? It's the best motorcycle in the world, and the man who designed it was born an' raised right here in diss house!"

Franklin never returned to the house after 1916. He brought his family to Springfield, Massachusetts, in 1920 –– the same year he designed the first Scout. Two years later, he was responsible for the first Indian Chief. Then the lesser-known single-cylinder Prince in 1924, and the Scout 101 in 1928. The latter, of course, is the bike everyone remembers, the bike still favored by Wall of Death riders.

On this weekend the country is commemorating 100 years since the Easter Rising. Irish history is anything but clear cut, yet many see that event as the beginning of the Irish revolutionary period –– the spark that helped lead to a free Ireland. Riding around on these streets, I wonder what Franklin must have thought about all that.

Of course, you can get too lost in thinking about these things. That night, my friend and I go to see an independent wrestling show and one of the bad guys is from Northern Ireland. The crowd chants "Sitch-yee ay-shun" ("situation" in a Northern Ireland accent) and he eggs them on in faux protest.

On my final day in Dublin, I pack up the bike under weak spring sunshine as my friend bounces his son on the Sixty's seat.

"I'm going to wander for a few days before catching the ferry back," I say. "I'm aiming for Tipperary today, then west to follow the coast."

"It's a long way to Tipperary," he says.

Sticking to smaller roads, I make leisurely progress south. The secondary roads, known as N roads, are gentle and undulating. The speed limit on them is 100 kph (62 mph), and Irish drivers are surprisingly respectful of the law. It all makes for an environment that leaves me imagining something more than looks has been carried forward from the Scout models of yore.

The Irish spirit is in there, too. The Sixty fits this place well. And the country's citizens somehow sense the connection. When I'm stopped, or even just moving slowly through villages, people walk out into the road to talk to me about the bike. Parents ask to have their children be photographed on it.

With the exception of mountain passes, most of the roads are good and I manage to avoid heavy rain. Even going slow, though, the smallness of Ireland reveals itself. I get from point A to point B far too quickly, so I loop back and ride the same roads again. In this way I suppose the bike reveals its American nature; it makes me long for roads that never end.