Attention MotoAmerica: This is How Points Should be Awarded 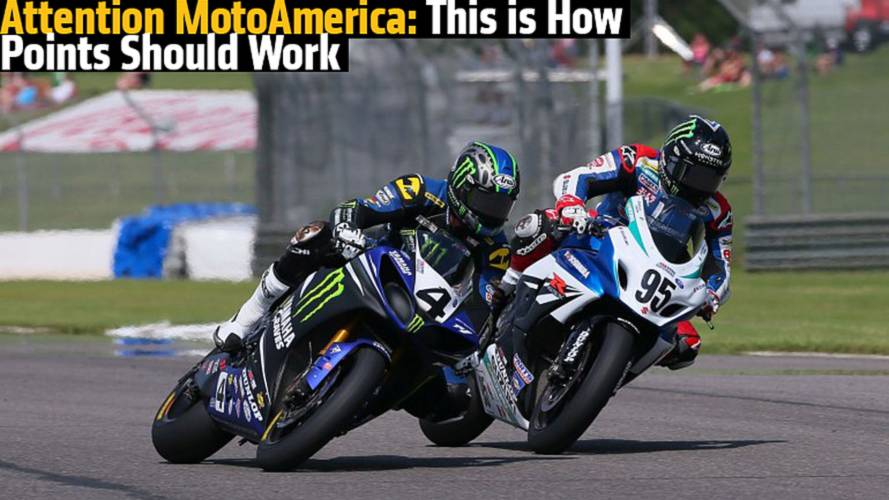 We take a look at how points systems are ruining racing and what to do about it.

It's said that the first motorcycle race took place the moment the second motorcycle was built. You can bet there were rules and negotiations and probably some Calvinball scenarios, but the most important truism in racing is, there's only one winner.

But these days, we see athletes "winning" by accumulating the most points in a season—not necessarily by being the best at the sport. In my opinion, season points championships can be excruciating to watch. Racers taking it easy, not going for the win, and just riding around for best average finish to win the title, sucks.

To put "winning" into perspective, last year NASCAR had two drivers with a shot at winning the championship without a single win, that should be impossible in this writer's opinion.

If you really want racing to be racing, then make it about winning; not about awarding the guy with the most consistent finish. Let's take the Isle of Man TT for example. You either win by clocking in the fastest time or you don't. Simple, effective, and gloriously competitive.

So here is my proposal to MotoAmerica and every other race series that does the season point system:

Each weekend, a winner is crowned and no points awarded. A racer either wins or loses, and money pays out through the field. Also, special awards can be given with additional cash. The money can be used for things like number one qualifier, most passes in a race, fastest lap, and maybe something like a "fan voted pass of the race" award, awards like this are common in sports like NASCAR.

These are incentives to ride for the win and not just being the first loser. It also means that anyone in the field can get more money with a solid performance that is beyond just where they finished. Finally, this could help mid-pack qualifying to end up with a nice extra bonus after running through the field on race day.

MotoAmerica would also benefit from season long statistics that garners awards: most wins, most laps ridden, most fastest laps etc. There would still be no points champion, and it gives privateers and smaller teams a shot at earning some additional cash. Instead of one big title sponsor, you could get smaller companies involved to sponsor the individual awards. Think of the kind of racing Formula 1 could be if points were irrelevant and strategy was only about winning that weekend.

In racing, winning should be the only thing that matters. As the great Ricky Bobby said: "If you ain't first, you're last."

During the the last Moto GP season, points were counted, racers worked on average finishes and they focused on not crashing instead of winning. The runaway success of Marc Marquez kept MotoGP interesting—and Marquez may have won more races, but he admitted that the win streak got to him and worried about points.

What do you think would you watch racing more or less with this system?