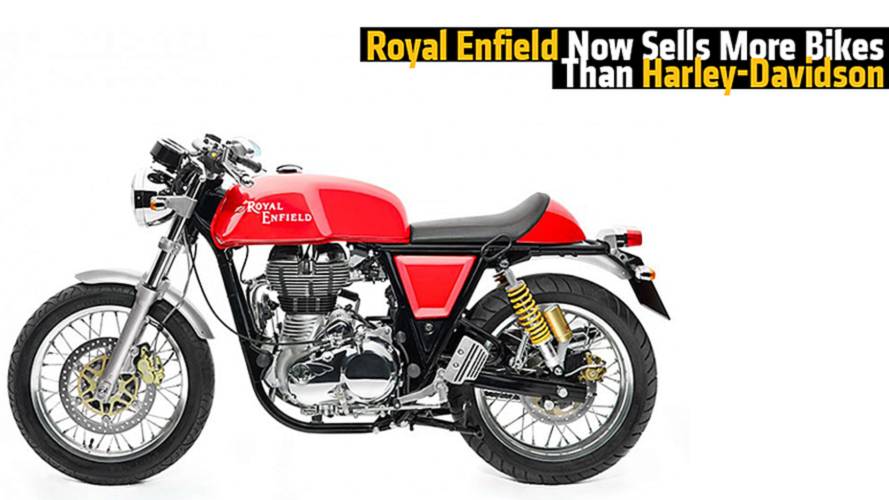 Royal Enfield sold a whole lot of motorcycles in 2014. How did this India-based company outsell a top moto seller? Find out at RideApart.

Move over Harley! There's a new kid in town. Actually, that's not true. Royal Enfield is hardly a new kid, having been producing motorcycles since 1901. But what is new is the position the venerable India-based manufacturer now holds: In 2014, the company sold more motorcycles than Harley-Davidson.

The numbers don't lie. According to The Times of India, Royal Enfield sold just over 300,000 bikes globally, compared to Harley's 267,000. That's pretty impressive.

However, it shouldn't be a surprise. Discussions of quality aside, Royal Enfield's bikes are a bargain - especially in their native land, where consumers can expect to drop a mere 93,000 to 150,000 rupees ($1,500 to $2,500 USD) on a Royal Enfield bike. We all know what Harleys cost, and given the per capita income in India, the affordability factor looms large. India's notoriously poor and clogged roadways and population density make motorcycles a far more mainstream form of transportation.

In fact, India is the world's second largest producer of motorcycles, and motorcycles (and motortrikes) outnumber cars 5 to 1. Awesome, right? According to the World Health Organization however, motor-related fatalities in India hover at about 231,000 per year, so it's not exactly a biker's paradise.

Royal Enfield's turnaround - a rapid one at that, with over 40 percent of that increase coming from sales between 2013 and 2014 - can at least in part be attributed to parent company, Eicher Motors. Managing director Siddhartha Lal has said that his ambition is to see Royal Enfield dominate the mid-size bike market in the U.S., and went so far as to hire former H-D head of global sales and customer service Rod Copes to oversee Royal Enfield's efforts here in the States.

Selling inexpensive bikes in Third World countries is one thing, but cracking the market here in the U.S. is quite another. Right now, there are only a relative handful of Royal Enfield dealers here in the U.S., and the brand has to overcome the perceived stigma of having its bikes built in India (to that, I have three words: KTM 390 Duke).

But with the Indian Scout's classic looks making a strong showing with an affordable sticker price, Royal Enfield might be in a great position. After all, the bikes (especially the military-styled Classic line) are certainly fun to look at and seem like a blast to ride. And for the price of one CVO Road Glide Ultra, you can buy four...wait, no...five of them!

READ MORE: READ MORE: Watch This Helmet Cam Collision of a Car Blowing a Red Light in the City | RideApart